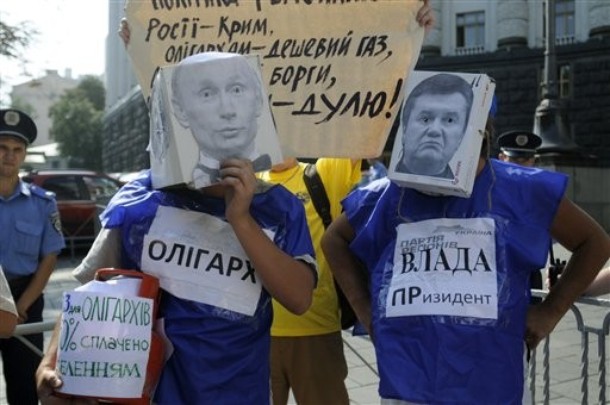 This discussion of Yanukovych is beginning to resemble the kind of conversations I used to have with Soviets back in the days of the Cold War. You say A, they say –A. You say B, they say –B. After a while, you begin to realize that you and they inhabit different worlds, have different values, see different things, and really can’t agree on anything. At which point, you realize that the only thing to do is raise your glass of vodka and propose a toast to peace.

So, rather than prolong an endless spiral of incompatible views, let me just focus on a few general points—for the last time.

First, notice that Adrian Karatnycky’s best-case argument in support of Yanukovych runs like this: The Orange governments were imperfectly democratic, corrupt, and inefficient—which is quite true—and Yanukovych’s government is no better. That is to say, Yanukovych’s main claim to fame, according to Karatnycky, is that he is no worse than his predecessor Yulia Tymoshenko.

So, for starters, let’s agree that Karatnycky’s very best defense of Yanukovych boils down to the claim that he’s lousy, but, hey, so were the other guys.

Second, notice as well that Karatnycky avoids details about the dismantling of democracy. Sure, it’s always more efficient to have a working majority in parliament—who would dispute that?—but that’s not the issue. The question is: how was that majority formed? And the answer is: by violating constitutional procedures. To which Karatnycky says: but, heck, they were being violated anyway! Perhaps—but never so openly, never so crudely, never so purposefully. Here, alas, is where the comparison with the Gleichschaltung really does merit some consideration.

Third, notice that Karatnycky really does trust the Party of Regions. They’re, basically, OK guys who want nothing but the best for their country. Now, were that indeed the case, discussions could focus on policy—and the Party of Regions and its critics could easily disagree for the good of Ukraine. Unfortunately, the reality is rather different: the Party of Regions wants power for the sake of power. It wants to rule. Alone. Everything. All the time. Controlling the Parliament and the Cabinet and the Presidency is therefore not enough. The governors must be subordinated, the capital city Kyiv must be captured, university autonomy, freedom of assembly, and press freedoms must be curbed, and the secret police must be mandated to sniff out dissenters. Oh, and the city councils and the mayors must be subordinated—as indeed they will be in forthcoming local elections in October. Why? Because the Party of Regions has—surprise!—rigged the rules that permit only parties—and not blocs (like, er, the Yulia Tymoshenko Bloc) to run candidates.

Now here’s the kicker. Karatnycky says, “There is reasonable diversity of views within the party of Regions and between the coalition members with pro-free market and more statist currents both represented. There is also a healthy rivalry for influence between factions in the Party of Regions that are jockeying for influence.” For old Sovietologists like me, this sounds like just the sort of unpersuasive argument that used to be made by the Soviets back in Brezhnev’s days. Notice that all this “healthy” competition appears to be confined to the Party of Regions and its allies in Parliament. That these allies were acquired in violation of the Constitution—and usually for hefty bribes in the hundreds of thousands of dollars—goes unsaid in Karatnycky’s account. That the bona fide opposition is being marginalized, ignored, and increasingly subject to judicial sanctions also goes unsaid.

Fourth, notice that Karatnycky provides no details of real economic reform. Not vague statements of intent—but real policies that really promote real economic reform. Surely a party and leader who have been preparing themselves for power for five years, who claim to be professionals par excellence, would have some idea of how to jumpstart the economy in the half year they’ve been in power?

Surely free-marketeers would appreciate that entrepreneurship is the key to Ukraine’s economic revival? Surely anybody with even a hint of capitalist convictions would appreciate that ruinous taxes will ruin the economy? Surely tough bargainers wouldn’t have extended Russia’s Black Sea Fleet basing rights in exchange for ephemeral gas price discounts? Surely defenders of property rights wouldn’t have permitted a Russian firm to acquire a major enterprise in Luhansk in a manifestly rigged auction?

Readers of this site should appreciate that this list of embarrassing questions really is endless. And Ukrainian democrats in Ukraine raise them all—sometimes heatedly, mostly coolly, but always fearfully. They know that Yanukovych can drive their country into the ground.

Now, Karatnycky’s response to all these qualms appears to be: but wait a sec! Yanukovych is a regular guy. He can be trusted. He’s got big plans. Don’t worry: give him the benefit of the doubt and all will be well.

But can Ukraine’s president be trusted?

His personal or political background provides no such grounds. A twice-convicted felon as a youth, Yanukovych the mature politician then completed two degrees in two years while working full-time running Donetsk province. Either the guy’s a genius, or running Donetsk is a piece of cake, or—wait—maybe the degrees aren’t worth the paper they’re printed on or—wait—maybe someone did his homework.

But bygones are bygones, right? Surely what matters is Yanukovych’s recent record: that must provide grounds for trust, right? Let me remind readers that this is the man who conspired in the falsification of elections in 2004 that led to the Orange Revolution. This is the man who, still, cannot accept that popular upheaval as anything but a CIA-financed anti-Russian plot. Which is a bit like claiming that the civil rights movement in America was the product of “outside agitators.”

But forget that, too. The bottom line is: What has Yanukovych done with all the power he’s amassed in the last half year?

And the answer is: zilch.

But let’s give Adrian Karatnycky the benefit of the doubt and agree that Yanukovych is a swell guy. So what? Even if he’s the “good tsar,” the sad reality is that he’s surrounded—or, more exactly, surrounded himself—with reactionaries, troglodytes, corruptioneers, and incompetents.

Would you want him to be president of anything besides Ukraine—say, a firm or a regional organization or a country?

Before you answer that: let’s drink to peace!

P.S. As luck would have it, the Razumkov Center in Kyiv, a respected think tank and reliable pollster, has just released survey data on political attitudes in Ukraine. They confirm the view that Yanukovych’s administration is failing.

Back in May, 25 percent said the new government met their expectations; today that number is 16 percent. The number of Ukrainians who believe Yanukovych’s government is better than its predecessor has dropped from 49 percent to 34 percent.

Finally, people’s attitudes toward Yanukovych have also shifted. Today, 48 percent believe his actions are directed in support of his own interests and those of his political allies, and 33 percent believe he’s acting primarily in defense of national interests. Just a few months ago, in May, those numbers were 30 percent and 50 percent. Moreover, the percentage of Ukrainians who fully support Yanukovych has fallen from 40 percent in May to 23 percent today, while those who fully support the government has fallen from 27 percent to a mere 14. It looks like many of the Ukrainians who once gave Yanukovych the benefit of the doubt are no longer doing so.

Alexander J. Motyl (Ph.D., Columbia University, 1984) is a Contributing Editor at the Atlantic Council, and a professor of political science at Rutgers University-Newark.