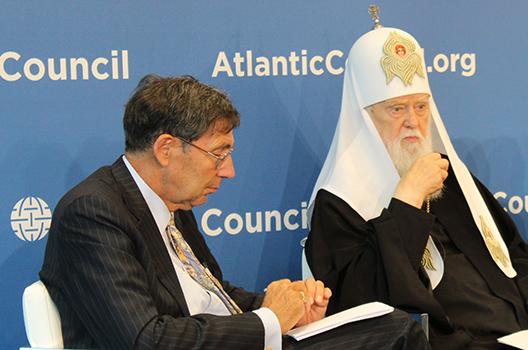 Patriarch Filaret, Patriarch of the Ukrainian Orthodox Church—Kyiv Patriarchate, is eager to get Washington’s support for the peaceful unification of two church factions, warning that Russia will use any hint of conflict as an excuse to expand its aggression in Ukraine.

For Filaret, the church issue is a key factor in the war in eastern Ukraine. In remarks at the Atlantic Council in Washington on September 19, he warned that to stop further aggression by Moscow, “we need to stop [Russian President Vladimir] Putin at Ukraine.”

An independent church is vital to achieving this goal, Filaret contended, as “without this strong spiritual basis, that is the church, we cannot have a strong country.” Equally important, Moscow Patriarch churches in Ukraine have been an instrument of Kremlin policy.

On September 7, Eastern Orthodox Constantinople Patriarch Bartholomew I dispatched US Archbishop Daniel of Pamphilon and Canadian Bishop Ilarion of Edmonton to Kyiv “within the framework of the preparations for the granting of autocephaly (independence) to the Orthodox Church in Ukraine.” Bartholomew’s decision could trigger a process uniting these two Ukrainian Orthodox branches. It calls into question the authority of the Russian Orthodox Church in Ukraine and will also deprive Russia of an important soft power tool.

Clerics in the Russian Orthodox Church, furious over Bartholomew’s policy, have warned that Ukraine’s bid for spiritual independence could lead to bloodshed. They have also frozen ties with Constantinople in protest.

Filaret said Ukrainian clergy will “do everything to prevent” conflict. Unification, he said, “will be based on freedom, there will not be any force. Parishioners, bishops, and clergy will have the opportunity to choose between the Ukrainian and Russian church.”  President Poroshenko has said the same thing.

The patriarch expressed the hope that unification would be completed “by the end of the year.” Any delay, he warned, would throw the process into doubt because Ukraine may elect a pro-Russian president who won’t back a unified Ukrainian church, he said.

Although the split within the UOC has been controversial, Russia’s invasion of Crimea in 2014 and support for separatists in eastern Ukraine has brought the church conflict back into the open, especially as UOC clergy maintained overt political allegiance to Moscow despite the Kremlin’s aggression toward Ukraine.

Filaret, a critic of Putin’s, placed heavy blame on the UOC for fomenting pro-Russian sentiment in Ukraine. “In the churches and cathedrals of the Moscow patriarchy we hear the propaganda that defends Russia and Putin,” Filaret said.

In the 1990s many in Ukraine were ambivalent about the idea of an independent church. The role of the UOC in supporting the Kremlin’s presidential candidate, Viktor Yanukovych, during the Orange Revolution reduced some support for it in 2005. But Russia’s aggression in Ukraine since 2014 dealt a major blow to the UOC and sharply increased support for an independent Ukrainian church.

In 2010, UOC-KP supporters numbered only 22 percent, but that number has shot up to 43 percent in 2018, while UOC’s numbers have shrunk from 35 percent to 19 percent during the same period. Ukraine’s parliament, the Verkhovna Rada, and the broader Ukrainian government now also support an independent church for the first time. According to Filaret, “the war was an eye opener for many Ukrainians. Specifically, whom the Moscow patriarchy [UOC] serves and whom the Kyiv patriarchy [UOC-KP] serves in Ukraine.”

Filaret said that any clergy or parishioners who wish to stay under the Moscow patriarchy will “stay in Ukraine but will have identical rights as the new UOC. Only the name will now be the Russian Church in Ukraine.” Filaret maintained that communities will be able to vote on whether their churches remain under Russian Orthodox control or move to the unified Ukrainian church. He was confident that “about two-thirds” of the clergy now in the UOC will join the combined church.

Filaret expects the transition to be peaceful as “tens of thousands to hundreds of thousands” of Ukrainians have already moved to the UOC-KP.