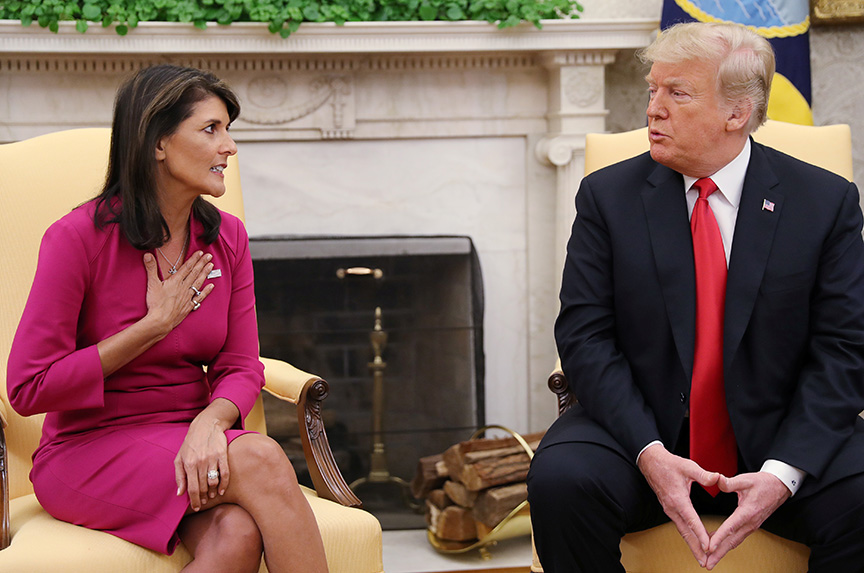 US Ambassador to the United Nations Nikki Haley’s resignation on October 9 caught many, including some within US President Donald J. Trump’s Cabinet, by surprise. She will leave the post at the end of the year.

Haley, a former governor of South Carolina and the daughter of Indian immigrants, at times struck an independent position from Trump, but was also a prominent supporter of the president.

Haley, for example, broke with Trump on Russia. She has said the United States should not accept Russia’s annexation of Crimea or its aggressions in eastern Ukraine. She was also vocal in her criticism of Russia’s role in Syria. “I don’t think we can trust [the Russians]…  They have certainly done some terrible atrocities,” she said during her Senate confirmation hearing in January 2017.

Sen. Lindsey Graham, the hawkish Republican senator from South Carolina, told the New York Times, “She sounds more like me than Trump.”

Trump picked Haley early in his administration—even before selecting Rex Tillerson and James Mattis for the jobs of secretary of state and secretary of defense, respectively.

Haley said in an interview with CNN that she laid down clear conditions for joining the administration. “I said ‘I am a policy girl, I want to be part of the decision-making process,’” she said in a 2017 interview, recalling her conversation with Trump. “He said, ‘done.’ And I said, ‘I don’t want to be a wallflower or a talking head. I want to be able to speak my mind.’ He said, ‘That is why I asked you to do this.’ In all honesty, I didn’t think they were going to take me up on everything I asked for. And they gave me all that. So how do you turn that down?”

Like Barack Obama before him, Trump decided to keep the UN ambassador post as a Cabinet-level position. This was not the case for the two most recent Republican presidents—George W. Bush and George H.W. Bush.

Haley was also a member of the Principals Committee, the National Security Council’s top decision-making body.

Trump was effusive in his praise of Haley on October 9. With Haley seated next to him at the White House, the president said his UN ambassador had done a “fantastic job.”

“The US is strong again,” Haley said in the Oval Office. “Countries may not like what we do, but they respect what we do.”

Trump left the door open for Haley to return to his administration in some other capacity.

While not reluctant to break ranks with Trump, Haley has also been a prominent public supporter of the president.

Following the publication of a controversial New York Times op-ed by an anonymous author who criticized Trump, Haley wrote her own op-ed in the Washington Post. In it she wrote that while she didn’t always agree with Trump on everything, “When there is disagreement, there is a right way and a wrong way to address it. I pick up the phone and call him or meet with him in person.”

“If I disagree with something and believe it is important enough to raise with the president, I do it. And he listens,” she added.

Atlantic Council analysts discussed the significance of Haley’s resignation and her contributions at the United Nations. [Check back for more analysis.]

On the implications of Haley’s departure: Now, of course, the administration will need to find a replacement for her. There is a new team around Trump in Washington, including a national security advisor who is famously hostile toward the United Nations as an institution. It will be interesting to see how they try to position themselves. The choice of a successor will reveal how the administration views the United Nations.

On the role Haley played within the Trump administration: As you saw from the White House meeting today, she managed to walk the line between disagreeing with the president on some aspects of policy, but agreeing with him strongly on others and being careful to maintain her relationship with the president. The tenor of the discussion today showed that she was successful in doing that.

Daniel Fried is a distinguished fellow in the Atlantic Council’s Future Europe Initiative and Eurasia Center. In the course of his forty-year Foreign Service career, Fried played a key role in designing and implementing American policy in Europe after the fall of the Soviet Union.

On the role Haley played within the administration: Ambassador Haley conducted herself with poise and principle, seeming to hold true to the American foreign policy tradition that our interests advance with our values. She maintained her independence and stature.

On the implications of Haley’s departure: We will find out. Much depends on her next moves.

Image: US President Donald J. Trump on October 9 said outgoing US Ambassador to the United Nations Nikki Haley has done “a terrific job.” They met in the Oval Office of the White House in Washington after the president accepted Haley’s resignation. (Reuters/Jonathan Ernst)