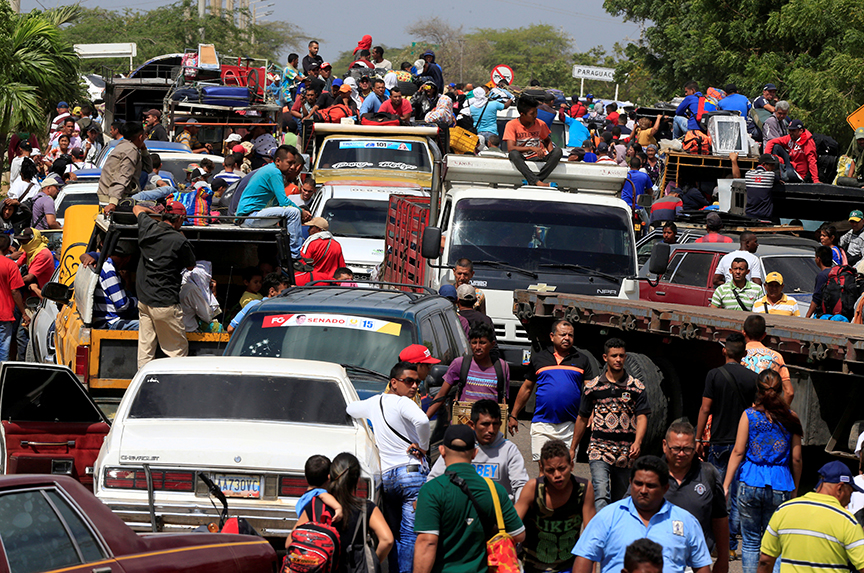 Venezuelans line up to cross into Colombia at the border in Paraguachon, Colombia, on Feb. 16, 2018. (Reuters/Jaime Saldarriaga)

US President Donald J. Trump’s administration will consider lifting sanctions on Venezuelan officials provided they take steps to ease the political, humanitarian, and economic crisis that is gripping their country, a US State Department official said at the Atlantic Council in Washington on April 30.

The Trump administration has slapped sanctions on Venezuelan officials, including Vice President Tareck El Aissami over his alleged involvement in drug trafficking; members of Venezuela’s Supreme Court, which attempted to strip power from the opposition-led National Assembly; and current and former Venezuelan military officials.

Noting that most of the US sanctions are on individual members of the regime, Michael Fitzpatrick, deputy assistant secretary in the State Department’s Bureau of Western Hemisphere Affairs, said: “What we are trying to do is to ensure that… we are not complicit in the wholesale looting of the financial coffers of Venezuela.”

Describing the sanctions as a means to an end, Fitzpatrick said that the Trump administration would lift them provided the targeted individuals show a willingness to respect the constitution and the National Assembly, and open a humanitarian corridor.

The Maduro government has blamed the sanctions for the prevailing humanitarian crisis. Fitzpatrick called this a “false argument.”

“Things have changed dramatically” in Venezuela, Fitzpatrick said. He referred to moves by Venezuelan President Nicolás Maduro’s government to constrict the democratic space in the country, hyperinflation, and a sharpening humanitarian crisis that is causing people to flee.

He said that the Trump administration is ramping up both its support for countries that are taking in Venezuelan refugees as well as a diplomatic effort to end the crisis that has caused the outflow in the first place.

The Trump administration has, provided financial assistance to countries in the region—particularly Brazil and Colombia—that are taking in the refugees. As for its diplomatic efforts, Fitzpatrick said the administration is working through the Organization of American States (OAS) to resolve the crisis.

The OAS, led by Luis Almagro, has taken a tough stance against Maduro but has, so far, been unable to promote a change of direction in Caracas. US Vice President Mike Pence will address the OAS in Washington next week.

Acknowledging that more needs to be done to address the humanitarian crisis, Fitzpatrick said that the crisis is largely the consequence of political and economic mismanagement by the Maduro government. “There has not been an earthquake, there has not been a tsunami,” he said.

Fitzpatrick said the US response is driven in part by a growing realization that there is a massive exodus underway from Venezuela. “It is very clear people are fleeing,” he said.

Marczak described the situation in Venezuela as “truly heartbreaking.”

“The truth of the matter is… Venezuelans today are much worse off than they have been at any moment in the country’s past,” he said.

A national door-to-door poll conducted by the Atlantic Council in Venezuela in March found that more than eight in ten Venezuelans believe that the country is mired in a humanitarian crisis, more than nine in ten Venezuelans consider food and medicine supply to be insufficient. Chavistas—those who subscribe to the regime’s leftist ideology—were among those polled.

In the past few years, more than 1.5 million Venezuelans have fled Venezuela, according to the United Nations Refugee Agency (UNHCR).

Marczak said the migrant crisis has turned into “an issue of grave hemispheric proportions.”

The Atlantic Council poll found that nearly three-fourths of the respondents, including nearly half of them chavistas, would support the opening of a humanitarian corridor in Venezuela. Respondents identified the Catholic Church, international nongovernmental organizations, and Venezuelan society as the most capable of managing this corridor. The Venezuelan government, the majority of the respondents said, was least capable.

The United States does not provide direct humanitarian assistance to any country without the prior permission of that country’s government. Furthermore, the Venezuelan government is not letting the international community do a proper needs assessment in the country, said Fitzpatrick. “Without those conditions we are not able to go directly in and provide that sort of humanitarian assistance,” he said.

The Trump administration, meanwhile, is looking at ways to support independent actors in Venezuela—whether members of the National Assembly freely elected in 2015 or journalists—to “ensure that what’s left of the social fabric is maintained intact,” said Fitzpatrick.

Fitzpatrick’s remarks were followed by a panel discussion that included Diego Beltrand, regional director for South America at the International Organization for Migration; Chiara Cardoletti, deputy regional representative to the United States of America and the Caribbean at the UNHCR; Julio Castro, a professor in the Infectious Diseases Unit at the Universidad Central de Venezuela’s Institute of Tropical Medicine; José Manuel Olivares, a representative in the National Assembly of Venezuela; and Susana Raffalli, a Venezuelan humanitarian expert. Gustau Alegret, US news director at NTN24, moderated the discussion.

Beltrand said that while in the past Venezuela was among the top countries in Latin America to accept refugees, today many countries in the region are taking in fleeing Venezuelans.

Cardoletti said countries like Brazil, Colombia, and Peru are taking in many Venezuelans and the UNHCR seeks to help build those governments’ capacities.

A battle for survival

Venezuelans are in a battle for survival as they struggle daily to obtain food and medical care.

Electricity needed to run medical equipment is in short supply. An ominously familiar (and grim) narrative is playing out across public hospitals in the country: an untold number of patients, including the elderly, women, and children, are dying as they await medical care. Doctors, helpless in the face of this worsening crisis, routinely go on strike in a desperate attempt to grab the government’s attention. Previously controlled diseases, such as malaria, are breaking out in the most populous areas at levels not seen in the past seventy-five years.

“The structure of the health system is broken,” said Castro. “It is crumbling.”

This, he added, has created the conditions for a “perfect storm.”

Venezuela was the first nation in the world to be certified by the World Health Organization as having eradicated malaria in its most populated areas. In 2017, however, as per data put out by the Venezuelan government, there were 480,000 cases of malaria in the country.

Olivares, who is also a doctor, said that Venezuelans are also dying from a lack of medicine and access to treatment.

The health crisis has been compounded by the fact that Venezuela imports most of its medical needs. As the government ran out of money, its debts mounted and providers eventually cut off supplies.

In 2016, Venezuela’s opposition-dominated National Assembly took the unprecedented step of declaring a state of emergency in the country and passed a bill to expedite the process of getting international assistance to Venezuela. Maduro ignored the bill and the judiciary declared it unconstitutional.

“The government doesn’t want to recognize a crisis,” said Olivares. “There are some political differences that are irreconcilable, but you have to help the people.”

“The government continues to deny this. They continue to not recognize the National Assembly… which makes it much more difficult to have a political dialogue in the country,” he added.

Raffalli described the crisis as “slow in developing, but then becomes acutely serious in a short period of time.”

She said, however, that as a result of an effort by the state and a large inflow of cash, the nutritional crisis had actually improved since December of 2017.

While the government will not admit it—because an admission is tantamount to acknowledging that there is a crisis—there are tons of medicines and food supplements that are entering Venezuela through “informal channels,” said Raffalli. “If there was more flexibility [on the part of the government] we could provide better assistance,” she added.

Raffalli said both the Venezuelan government and the international community are politicizing the humanitarian situation inside Venezuela. “We need true information from both sides so we can deploy a humanitarian response; we need openness from the government,” she said.