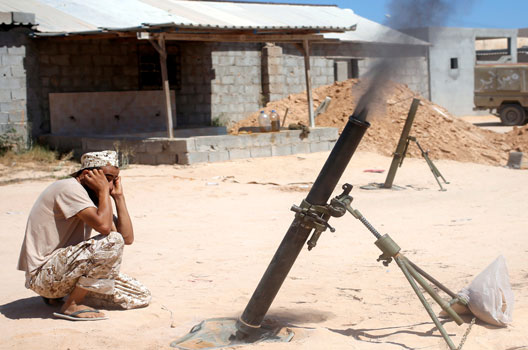 A fighter of Libyan forces allied with the UN-backed Government of National Accord fires an 81mm mortar round in Sirte, Libya. July 25, 2016. (Reuters/Goran Tomasevic)

The Libyan government must ensure that it can secure, stabilize, and unify the country, even if ISIS, the Islamic State of Iraq and Syria, is defeated with the help of US and Europe-backed airstrikes in the North African country, according to the Atlantic Council’s Karim Mezran.

“If they succeed in defeating ISIS, but the government is not stable and there is a lack of authority, then [ISIS fighters] can just go to another place and continue their attacks. Defeating ISIS in Sirte is just a first step,” said Mezran.

“The government must ensure that they can control the territory. Without that, ISIS can just resurface and become even more effective,” he added.

The US conducted airstrikes on August 1 in Libya against ISIS in the coastal city of Sirte—a key staging area for the terrorist group’s operations in the country. The strikes were carried out after the Government of National Accord (GNA), Libya’s UN-backed transition government, called on the United States to strike ISIS in Sirte.

The US also carries out airstrikes against ISIS in Syria, Iraq, and Afghanistan.

Libya has been wrought with chaos since its longtime leader, Moammar Gadhafi, was ousted and ultimately killed in 2011. The country has been split between two rival governments—an Islamist-backed one in Tripoli and an internationally recognized one in Tobruk.

Following protracted negotiations between both sides, the Government of National Accord, led by Prime Minister Fayez Serraj, was installed. However, the GNA has yet to win a vote of approval in the Tobruk-based House of Representatives.

A joint communique between the US and twenty other nations to provide weapons and training to help the GNA fight ISIS was released on May 16 after a meeting in Vienna, Austria.

While acknowledging the GNA as “the sole legitimate government of Libya” and security as “key for the future,” countries participating in discussions in Vienna said that “the GNA faces critical security challenges, but it does not face them alone.”

Indeed, Pentagon spokesperson Peter Cook suggested that the August 1 strikes are the start of a prolonged military operation targeting ISIS in Libya.

“Additional US strikes will continue to target ISIS in Sirte in order to enable the GNA to make a decisive, strategic advance,” said Cook.

Mezran noted that foreign-led interventions beyond air support—including troop deployment—are still off the table, however.

“The Libyan government has repeatedly said that they are not going to call for foreign intervention except in certain hot-spots, such as Sirte,” said Mezran.

“So far, talks [for intervention] have been limited in time and in scope both from any special forces and airstrikes and from intelligence gathering. There has been no talk within the GNA of calling for a larger deployment of troops,” he added.

US commanders have estimated that up to six-thousand militants fight on behalf of ISIS in Libya—a number that has increased two-fold since 2015.

A UN arms embargo on Libya has been in effect since 2015. The embargo prevents Libya from purchasing fighter jets, attack helicopters, tanks and munitions. The rationale behind implementing the embargo was a warning from the UN that arms shipments could end up in the wrong hands.

The embargo is not expected to be lifted unless the GNA resolves its political stalemate with the House of Representatives in Tobruk and subsequently builds up a sustainable military institution.

“The GNA first has to resolve the problem with its recognition in Libya by the House of Representatives. Once it is recognized, they have to start building up their army and recruiting troops. Once the army is relatively built up…then the arms embargo may be lifted…otherwise no one will be able to know where the weapons will go,” said Mezran.

Karim Mezran spoke in an interview with the New Atlanticist’s Mitch Hulse. Here are excerpts from our interview:


Q: How does the fact that the GNA requested the US to engage in these airstrikes affect the situation riling domestic politics in Libya? Does the GNA asking for military support lend itself to reinforcing its legitimacy and reputation in the country?

Mezran: First of all, military commanders have asked for foreign support in weapons and equipment for a long time. I was surprised to see that this support was not being quantified and not being applied on the ground because we know that the GNA’s main strength derives from support of the West. This support has so far been in words, rather than in tangible ways. So, this is the first sign that upon request of this government…to support the troops in Misrata, which leads to one positive advance that we now see with the Misrati being supported thanks to the support that they have from the GNA.

Before, a lot of people were saying that the Misrati were acting on their own…that they don’t take orders from the GNA. Now we see that a connection has been established: The Misrati asked the GNA to ask the Americans and the Europeans for support, and support came. This is a step forward in clarifying the hierarchical government relationship in the region.

But, it does not resolve the larger issue, which is the legitimacy of the GNA because there are still obstacles like the approval of the House of Representatives, which is not coming…Western support so far is not capable of enforcing the acceptance and the legitimization of the GNA. And that is a weak point. So far, any diplomat that you ask, the GNA is the government supported by the West.

Q: Do these US-backed airstrikes weaken domestic political support for General Khalifa Haftar, the chief of the Libyan army, who has refused to work with the UN-backed GNA government?

Mezran: This is definitely putting him in a difficult position. As we know, he has some support from the West—three French soldiers were killed while supporting his troops. But of course, the fact that the US officially intervenes on request of the GNA, which is the government that Haftar does not recognize, puts him in a difficult position. We will see what will moderate his stance. The signals are not that positive. Haftar seems to be pursuing a plan that does not want to recognize the GNA and submit to its authority.

Q: There have been reports of US and French forces deploying special forces on the ground to combat ISIS. Will Libya’s government require large-scale troop deployment to secure regions of the country where ISIS operates? Do you expect the GNA to formally request such deployment in light of its call for the US to carry out airstrikes on August 1?

Mezran: So far, this is not on the table. The government has repeatedly said that they are not going to call for foreign intervention except in certain hot-spots, such as Sirte…So far, the talks have only been that of limited in time and in scope both from any special forces and airstrikes and from intelligence gathering. There has been no talk within the GNA of calling for a larger deployment of troops.

Q: A UN arms embargo prevents weapons from going to Libya. Do you expect this embargo to be lifted as foreign military support officially continues to assist the GNA in combating ISIS in Libya?

Mezran: Yes, but the GNA first has to resolve the problem with its recognition in Libya by the House of Representatives. Once it is recognized, they have to start building up their army and recruiting troops. Once the army is relatively built up…then the arms embargo may be lifted…otherwise no one will be able to know where the weapons will go. The embargo is a bit of a joke because we know that the Egyptians and the UAE are openly arming [Libyan Army Gen.] Khalifa Haftar. This has been admitted by Haftar himself.

Q: The Pentagon suggested that the August 1 strikes are only the beginning for a larger international military operation in Libya in the long-term. Do you think this suggestion carries weight or will military involvement remain relatively the same?

Mezran: I think it will be an intensified aerial campaign but they will not go farther [by deploying forces]. Involvement will be dictated by the military needs on the ground more than the political needs of the Libyan government.

If you succeed in defeating ISIS now in Sirte, but the government is not stable and there is no authority, then [ISIS fighters] can just go to another place and continue their attacks. Defeating ISIS in Sirte is just a first step. The government must ensure that they can control the territory. Without that, ISIS can just resurface and become even more effective.