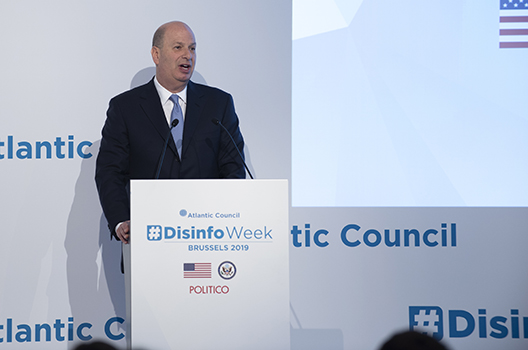 “Russia is trying to use a strength of our democracies – our openness, our flow of information – to destabilize us,” US Ambassador to the European Union Gordon Sondland warned on March 7. But while “the Kremlin is using the same tactics in an attempt to weaken the credibility of America’s commitment to Europe,” he continued, the United States’ “alliance with the European Union is unshaken, is strong, and is deep.”

Sondland, addressing the Atlantic Council’s Disinfo Week event in Brussels, Belgium, stressed that the United States and Europe remain on the same page when it comes to disinformation, despite temporary disagreements on trade and defense spending. “We are determined not to allow the Kremlin to undermine our democratic institutions,” he said. “Neither will they shake America’s commitment to Europe, nor undermine transatlantic unity…we’ve weathered far worse than an onslaught of propaganda from Russian troll farms.”

Sondland explained that Washington is “actively working with Allies and partners in Europe to identify, recognize, and expose disinformation and other malign influence activities.” This global effort to combat online disinformation campaigns is the focus of the Atlantic Council’s Disinfo Week, which brings government officials and counter-disinformation experts together for four days of discussions in three European cities (March 4 in Athens, March 5 in Madrid, and March 7-8 in Brussels).

With a specific eye toward upcoming European Union parliamentary elections in May, Sondland promised that the US government is “increasing our own efforts to promote accurate messages about the United States and our Allies and partners. We are calling out disinformation. And we continue to closely monitor and counter malicious cyber activity and disinformation to safeguard the integrity of our democratic institutions.”

Confident that Moscow’s attempts to spread disinformation will not cease, Sondland suggested that governments and civil society groups “get out in front and hit the Russians before they hit you.” Rather than waiting for Russian trolls and bots to spread falsehoods about new initiatives or policies that are sure to anger the Kremlin, Western governments should warn their populations of potential Russian counternarratives to inoculate themselves from these campaigns, Sondland argued. “Get out ahead of them, don’t play whack-a-mole,” he said.

Sondland was certain that global democracies would be able to weather the temporary storm of disinformation. “The United States and Europe share unshakable democratic values and a commitment to free and open societies,” he said. “And no amount of underhanded propaganda is going to change that.”

Other disinformation experts at Disinfo Week warned policy makers that the problem of online disinformation has grown much larger than the previously-seen Kremlin-backed coordinated campaigns against the United States, United Kingdom, Ukraine, France, and others.

According to Rachel Lavin, an Irish digital and data journalist who worked with a civil society group to identify online disinformation during the Republic of Ireland’s 2018 referendum on abortion, nonstate actors are increasingly driving online disinformation. “It’s not really about the Russian bogeyman attacking your country,” she argued. “It’s about people in your country and abroad interested in the issues of your country taking the Russian playbook and applying it.”

Clint Watts, a distinguished research fellow at the Foreign Policy Research Institute and a senior fellow in the George Washington University’s Center for Cyber and Homeland Security, agreed, saying “the biggest threats moving forward really isn’t the Russians; it’s us. It’s our political campaigns, our political leaders, [and] lobbying groups; those that have seen what the Russian playbook does but have been able to—through finance and technology—really up the game.”

The way disinformation spreads is also changing, according to Chloe Colliver, a research manager for the London-based Institute for Strategic Dialogue. She cautioned that “focusing purely on disinformation as kind of false information campaigns is a flawed way to go about this in terms of thinking about response.” Most malign actors online are not relying on purely fake news or information, Colliver explained, but rather “highly sensationalized, heavily biased media or even legitimate fact-based media, that is being warped, misused, and spread at scale.” She warned that these activities could be “more difficult to deal with in terms of a content-based approach.”

Liisa Past, a next generation leader at the McCain Institute for International Leadership, reported that recent parliamentary elections in Estonia were actually quite boring from a disinformation side, as their was not a comprehensive Kremlin campaign. Past explained that this is evidence of “a strategic silence,” by the Kremlin, “because Estonia is not a high-value target.” While policy makers across the family of global democracies have been consumed with fear about potential Russian action, Past argued that Moscow’s attention seems to be fixed on “low-cost, high-value targets,” such as political campaigns and politicians in high-profile elections, rather than on low-profile elections or high-security targets such as actual voting systems. Watts agreed, reminding attendees that “there are probably fewer people in the troll farm than there are in this room right now.”

The speakers argued that the response to online disinformation needs to be measured, in order to avoid playing into the hands of authoritarians, who want to limit the freedom of the internet. “As the defenders, we need to stop focusing on reaction. Because if we focus on reaction, we’re already allowing the adversary to define our space,” Past said. Lavin explained that simple identification of false information campaigns can be effective. Her team found in dealing with misleading foreign and domestic accounts during the Irish referendum that “the more their use of dirty negative tactics was exposed, the more it negatively impacted their campaigns.”

Watts ultimately said that stopping disinformation will be up to democratic societies themselves healing the internal divides that have made them susceptible in the first place. “If you don’t have a population that has a good, agreed-upon version of fact and fiction,” he said, “disinfo from afar is very easy to perpetrate.”

Image: The Hon. Gordon Sondland, the US Ambassador to the European Union, speaks at the Atlantic Council Disinfo Week event in Brussels, Belgium on March 7, 2019.