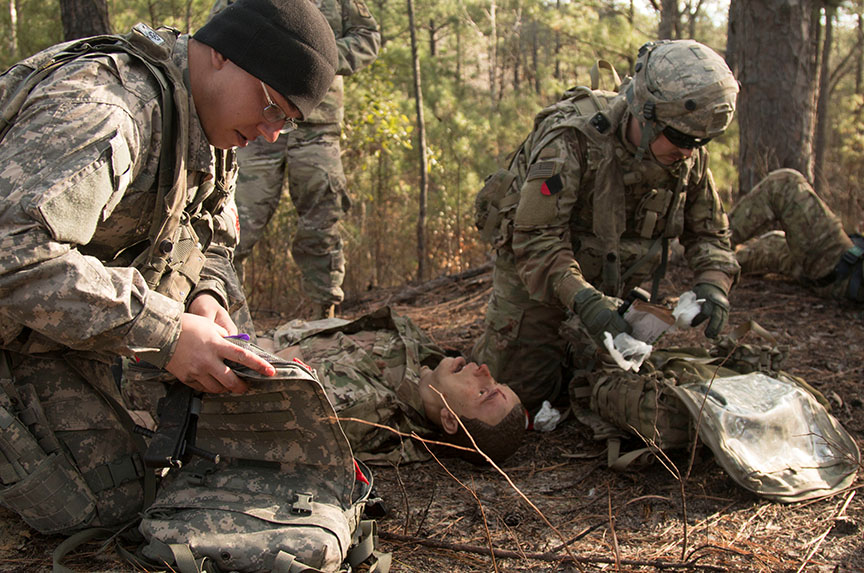 Sgt. Kyle Cabral (right), a combat medic with 3rd Battalion, 1st Security Force Assistance Brigade, advises an actor serving as a member of the Afghan National Army as they tend to a simulated soldier supposedly injured by a vehicle-borne improvised explosive device along the route to their unit's mission during training at the Joint Readiness Training Center at Fort Polk, Louisiana, on January 23. (US Army via Reuters)

Supply teachers are not to be envied. While they may be highly qualified in a particular subject, they re often sent in to teach classes they are not familiar with and doing so without the necessary training.

Over the past several years, similar scenes have been repeating themselves in Iraq and Afghanistan, where Western troops have been training local armed forces. While competent in combat, the military instructors have essentially been functioning like supply teachers: teaching without the necessary educational background, and only for a limited period of time.

Now the United States and the United Kingdom are addressing the issue: both countries are pioneering Teacher Corps. Other countries should follow their example.

Earlier in February, the US Army held an activation ceremony for its new Security Force Assistance Brigade (SFAB) in Fort Benning, Georgia. The unit is the first of six teacher brigades planned by the Army and will soon deploy to Afghanistan to—yes, teach local forces.

Teaching of partner forces is nothing new: it has been taking place virtually since the beginning of Operation Enduring Freedom in 2001 (and indeed decades ago in countries from Ghana to South Korea). But though the United States and its allies sent many of their best soldiers to train Afghan colleagues—and later Iraqi troops—the return on investment has, diplomatically speaking, been disappointing.

By 2016, the United States alone had spent more than $70 billion training Afghan forces, but while both Afghan and Iraqi forces have at times fought valiantly against Taliban and the Islamic State of Iraq and al-Sham (ISIS), respectively, they still rely on Western backup.

When the SFAB’s first brigade deploys to Afghanistan this spring, it will be US Army’s first dedicated venture into professional teaching of partner forces. One thing already sets the SFAB’s troops apart from previous military trainers: all have volunteered for the “Teacher Corps.”

“Instruction is core to our mission of working with partner forces,” its commander, Brig.-Gen. James Roddis, told me when I wrote about the Specialist Infantry Group for Defense One. “Our troops are good fighters, but they also score well in empathy and cultural understanding.”

That’s exactly the point. Just like a brilliant physician or musician is not necessarily a good teacher of physics or music, accomplished combat troops aren’t always good teachers of their skills. What’s more, partner forces in countries such as Iraq and Afghanistan are not just any students. For one, some are illiterate.

Much like a classroom teacher, military instructors have to find educational methods to fit the pupils’ needs. Not surprisingly, Roddis’s troops and their US counterparts are learning exactly that. Of course, given that the educational objective is partner forces able to fight on their own, the Teacher Corps officers are also learning how to teach in high-threat environments, with skills ranging from infantry combat in small African countries to tank-assisted urban warfare in Iraq.

Here’s the thing: Teacher Corps should not remain an experimental effort. On the contrary, every country should have one. Yes, taking experienced troops out of other units simply to train them as teachers is expensive. But teaching partner forces without the necessary pedagogical skills is clearly far more expensive: not even the United States can afford $70 billion-partial failures.

The challenge is, of course, how to operate a qualified and experienced Teacher Corps whose members are also up-to-date combat soldiers. It would benefit nobody to have career-long educators train partner forces. Roddis’s teachers will stay for one tour and perhaps more—but not indefinitely. This year has already delivered new problems in many areas, but when it comes to the multiannual headache of how to help countries like Iraq and Afghanistan become safer there’s hope.

Elisabeth Braw is a non-resident senior fellow in the Atlantic Council’s Scowcroft Center for Strategy and Security. Follow her on Twitter @elisabethbraw.