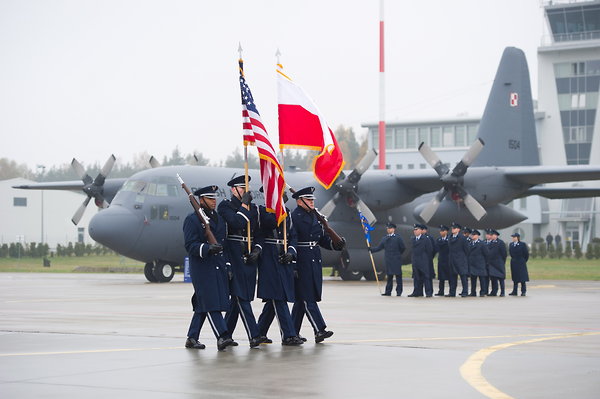 On Friday, the United States will inaugurate its first permanent military presence in Poland by deploying an air force aviation detachment (AV-DET) at the Polish 32nd Tactical Airbase in Lask.  The detachment will further institutionalize US-Poland military-to-military engagement and is a needed and useful boost to the bilateral security relationship.

The detachment consists of some eight to ten personnel led by a US Air Force major.  It will plan and coordinate the activities of USAF elements that will rotate into Poland for exercises that will involve US and Polish F-16s and C-130 transport aircraft, among other assets.

While there are currently no plans to permanently station US aircraft in Poland, the US- Poland Memorandum of Understanding signed on 13 June 2011 creating the AV-DET outlines a robust annual exercise agenda. It states:

The USAF AV-DET will facilitate combined training exercises and military-to-military engagement, through periodic rotation (four annually, with a goal of quarterly rotations no shorter than two weeks each) of US aircraft, and continuous engagement, including combined skill development and exercises, between the USAF and PLAF. . . . It is intended that the four rotational deployments each year to Poland will consist of F-16 or C-130 aircraft. It is intended that two rotations of F-16 aircraft will be conducted each year.  Additional combined PLAF and USAF training exercises, including the use of fifth generation fighter aircraft, may be undertaken.

In Central Europe, the AV-DET in Poland complements US Joint Task Force East which mans joint army and air forces bases in Bulgaria and Romania.  In addition to being the first permanent presence of US military personnel on Polish soil aside from military attachés, the AV-DET is significant for the following reasons:

The AV-DET is a very positive development in the US-Poland relationship, and it offers great potential to serve NATO.   In addition to reinforcing the credibility of NATO Article V planning, the AV-DET could support the Alliance’s efforts to expand its global relationships, including with the Arab world.  One can envision the AV-DET and its Polish partners serving as the nucleus for multilateral air force exercises engaging, among others, air forces, from the Persian Gulf, Jordan, or Morocco.

Ian Brzezinski is a senior fellow in the Brent Scowcroft Center on International Security and is on the Council’s  Strategic Advisors Group (SAG).