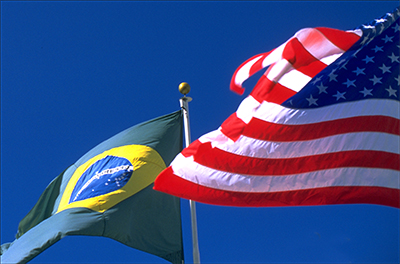 On June 30, Brazilian President Dilma Rousseff will visit the United States, nearly two years after she cancelled a planned trip to Washington in the wake of revelations by Edward Snowden that the US National Security Agency was monitoring her phone calls and emails.

Peter Schechter, Director of the Atlantic Council’s Adrienne Arsht Latin America Center, said that while the visit is long overdue, it must result in both countries compromising longstanding differences in order to forge an ambitious agenda for years to come.

Schechter, in a June 17 interview, said Rousseff’s visit comes at a “tenuous moment” in Brazil’s domestic politics, with the leftist leader’s popularity at an all-time low. Yet this very circumstance “could make an otherwise uneventful visit a positive one for US-Brazil relations” that took a hit after secret documents revealed that the NSA was not only eavesdropping on Rousseff and her aides but also targeted state-owned energy conglomerate Petrobras.

Brazil, with 203 million inhabitants and a GDP exceeding $2.2 trillion, ranks as the second-largest economy in the Western Hemisphere and the seventh-largest in the world. But, as Schechter says, “US-Brazilian ties have never lived up to expectations, and the disappointments reverberate around the hemisphere.”

For one thing, Washington and Brasília “lack a cornerstone agreement that would anchor continued progress in their bilateral relationship, similar to NAFTA’s role in US-Mexico relations or the nuclear cooperation agreements with India.”

“Presidents Obama and Rousseff have an imperative to produce a way forward that will benefit Brazil’s precarious domestic situation and the US standing in Latin America,” Schechter said. “The recent US-Cuba opening has earned the United States significant political capital in the region. However, for positive developments to continue, President Obama will need to show that his administration places special value on the US-Brazil relationship. It will also help counter the rising foothold of China, which overtook the United States as Brazil’s largest trading partner just a few years ago.”

With that in mind, the Adrienne Arsht Latin America Center has issued a report—“US-Brazil Relations: A New Beginning?”—written by Nonresident Senior Fellow Ricardo Sennes. The 30-page report describes the current state of relations and outlines five key recommendations to secure the future of a cooperative US-Brazil relationship:

The New Atlanticist’s Larry Luxner spoke to Schechter on June 17, as the report was going to press. Here are excepts from the interview:

What are some common goals the United States and Brazil can pursue together?

Schechter: One issue which we’ve thought is in the interests of Brazil and the US is Venezuela. It’s spiraling out of control, and to a large extent it’s become a narcostate with the second-highest murder rate in the world, facing a drop in oil prices and a complete lack of investment. People have to go to five or six stores to find what they need. This is a massively important country, and a place where the US and Brazil both have an interest.

Is a comprehensive US free-trade agreement with Brazil possible anytime soon?

Schechter: We see the beginnings of the loosening of trade barriers in individual sectors, like agriculture and biofuels, where the Brazilians are very sophisticated. But I don’t think there’s any chance today for a free-trade agreement or something that is multi-sectoral and covers a wide range of products and services.

Where a beginning could occur, though, is an agreement on services. Brazil is increasingly a service-oriented economy; you can’t think of it anymore as a manufacturer of shirts or shoes. Brazil now manufactures airplanes and airplane parts, and sells the services of those airplanes. They want to enhance medical tourism for African countries. They provide IT and financial services. This is an open area, and it wouldn’t necessarily impinge on the protectionist instincts of some key US and Brazilian sectors. Services provide an area in which there could be substantial agreement, and it is very forward-looking for Brazil.

Do bad feelings resulting from the 2013 NSA spy scandal still linger in Brazil?

Schechter: Both of these people are politicians, and they’re both adult enough to get over whatever personal irritations they might have had. I think she certainly needs him today to be able to bring back some agreements that she can sell as economic progress. For Obama, the Brazil relationship is important because Obama has made a decision to make progress in Latin America, which he’s done with Cuba and Central America, and by sending an observer to the negotiations between Colombia and FARC. Obama is very engaged in Latin America, but he understands that you cannot be fully engaged with Latin America unless you engage with Brazil.

You mentioned Cuba. What opportunities are there for United States and Brazil to engage, now that the Obama administration is on the verge of restoring full diplomatic relations with Havana?

Schechter: There are huge areas of cooperation between the US and Brazil on Cuba, principally on Cuba’s reintegration into the world economy. There’s a complete lack of an agriculture sector outside of the tobacco industry, not to mention the insufficiency of its roads, its infrastructure, and more than anything else, the complete lack of an IT sector. To be able to bring that economy to the standards of the best of Latin America is going to take a lot of effort by the international financial institutions like the IMF and the World Bank. Brazil could be helpful in cajoling Cuba back into these institutions.

What do you make of the ongoing Petrobras kickback scandal, in which dozens of politicians, senior business figures, middlemen and others have been arrested?

Schechter: First the good news: Brazil’s institutions are working. The press is reporting on this scandal, top of fold, front page, every single day—with names, addresses and phone numbers. Secondly, the police in Brazil are federal; therefore, they are employees of Dilma. They’re investigating this deeply and aggressively, in a manner that nobody doubts. The judicial system has indicted these people and has said more indictments are coming. While there are major doubts about Dilma and about the elites, nobody has expressed any doubts about the judicial system. It’s wonderful to see Brazilians out in the streets, protesting impunity and robbery, and not protesting the fact that they’re hungry.

Seventy million Brazilians have exited marginalized living and have entered the middle class. Whereas hungry people say, “Let them rob as long as I’m fed,” people who are fed want not just schools but better schools, not just roads but better roads. As Brazilians get richer, their tolerance for impunity becomes far less.

What impact could the scandal have on Brazil’s economy?

Schechter: Petrobras is one of the world’s most important oil companies. As a result, to simply discount it as moribund and dead is a big mistake. However, between lower oil prices and the fact that nobody understands how much money was stolen, Petrobras has taken a massive hit. It funded a lot of the cash transfer programs Lula used to bring people out of poverty, and Brazil is at a moment where it desperately needs to grow. And it’s more difficult for Petrobras to raise money on capital markets than ever before.

What does the unfolding scandal mean for Dilma’s political future?

Schechter: The PT [Workers Party] has never had a majority in Congress. Dilma was elected president, but at no point did the PT ever have more than 35 percent of the vote. So coalition members are either fraying and want to leave because they don’t want the spillage, or they smell blood and are squeezing the government for everything they have, which is the case of the presidents of the Senate and the House.

Many people believe that with her numbers below 20 percent—and some polls put them as low as 13 percent—Dilma will either resign or be impeached. I don’t think that, unless there is some new discovery which reveals that she knew of this corruption in Petrobras.

Image: Brazilian and US flags fly outside the InterContinental Hotel in Rio de Janeiro. Photo by Larry Luxner.