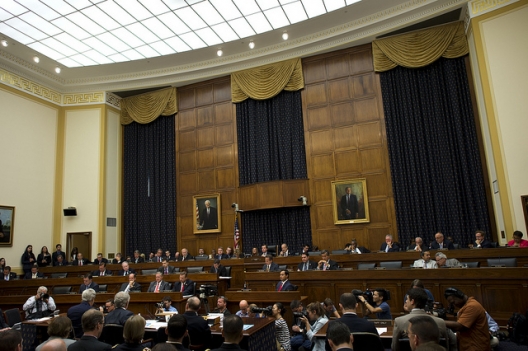 President Barack Obama’s abrupt decision to seek congressional authorization for striking Syria has had at least one salutary effect so far: it has given Americans and their elected representatives a chance to express serious reservations about the limits of U.S. military intervention in shaping troubled foreign societies.

Whichever way Congress votes in giving President Obama the authorization he seeks, the congressional hearings this week have been extraordinary for their introspection and bipartisan nature.

Strange bedfellows have come together in both agreement and disagreement about the wisdom of hitting Syria in the aftermath of the alleged killing of hundreds of civilians in a Damascus suburb Aug. 21 with the nerve agent, sarin.  A trio of U.S. war veterans – Secretary of State John Kerry, Defense Secretary Chuck Hagel and Chairman of the Joint Chiefs of Staff, Gen. Martin Dempsey – have struggled to convince members of Congress that “limited” strikes on Syria will deter Syrian President Bashar al-Assad from using chemical weapons again.

The three also wanted to convince Congress that such strikes would not embroil the U.S. in a wider war, and show other U.S. adversaries such as Iran that Washington is serious about upholding red lines against the development, proliferation or use of weapons of mass destruction.

The Senate Foreign Relations Committee voted 10-7 on Wednesday in favor of giving the administration up to 90 days to conduct the strikes. But at a hearing before the House Foreign Affairs Committee that took place while the Senate panel voted, isolationist Tea Party Republicans and anti-war Democrats appeared to outnumber neoconservatives and humanitarian interventionists.

‘Who are the good guys?’

One of the toughest exchanges took place between Hagel and Representative Tom Marino, a Republican from Pennsylvania. Marino said he feared that hitting Assad would benefit the Syrian opposition, which includes Islamic extremists who hate the United States.

“Who are the good guys over there in Syria?” Marino asked. “Do you trust these people?”

Hagel, a decorated Vietnam War veteran who voted for the Iraq war but quickly came to regret that, conceded that there are “various groups that are part of the opposition.” Then Hagel tried to change the subject by saying that “the focus is not on good guys or bad guys, but on a narrow authorization” for the use of force to degrade Assad’s ability to use chemical weapons again.

Kerry also tried to emphasize the narrow nature of the strikes the administration contemplates, insisting that, “I don’t believe we’re going to war.” However, Dempsey admitted that attacking Syria was “an act of war” and that the United States had to be prepared for a variety of responses, including terrorism and cyber attacks.

Overall, the hearings underlined what public opinion polls have shown – that most Americans do not support direct U.S. military intervention in yet another Middle Eastern country. After a decade of fighting in Iraq and Afghanistan – with no dramatic improvement in either society despite the outlay of trillions of U.S. dollars and the loss of thousands of American and foreign lives — the American public is weary of continuing to bear the burden of being what Kerry, echoing former Secretary of State Madeleine Albright, called “the indispensable nation.”

The Obama administration is also having trouble defending its goals for the Syria mission – a kind of “Goldilocks,” not-too-hot, not-too-cold series of actions meant to deter Assad from using chemical weapons again and uphold U.S. credibility without giving too much advantage to rebels who have also committed serious human rights abuses.

‘There are no good guys’

Jeff Duncan, a congressman from South Carolina, summed up the feelings of many Americans when he said, “We shouldn’t be drug into someone else’s civil war where there are no good guys.”

Kerry, Hagel and Dempsey tried to counter those sentiments by warning there would serious consequences if the U.S. doesn’t respond to Assad’s apparently massive use of chemical arms. They said a failure to act would lead to more innocent civilians being gassed, chemical weapons potentially proliferating and threatening U.S. military forces abroad and even the U.S. homeland.

Kerry and Hagel also insisted that Iran would be emboldened to continue a nuclear program that could give it the capability to make bombs.

But if Iran was supposed to be the administration’s trump card, it was mentioned as a factor in their decision making by only seven of 35 members of the House committee who participated in Wednesday’s hearing.

And Bruce Riedel, a veteran expert on the region, questioned the Obama administration’s linking of Iran and Syria.

While “the Israelis want us to bomb Syria because they desperately fear Obama will back down on Iran, the two cases are very different,” Riedel said. “Syria is using WMD against its own people; Iran is developing a capability which it wants for deterrence.

“But they are alike in two keys ways,” he continued. “First military action against either Syria or Iran will have unintended consequences probably unforeseen. Limited strikes can grow into open-ended campaigns that become increasingly costly.”

Price is a factor

Indeed, many in Congress cited the likely financial costs of another American intervention as a reason for caution when the U.S. is short of funds to deal with urgent domestic needs.

On Wednesday, Hagel admitted the price tag for even limited strikes would likely be in the “tens of millions” of U.S. dollars. Kerry said unspecified Arab countries had offered “quite significant financial support” and that “some of them have said they will carry the whole cost” of U.S. strikes. But when pressed to name the countries that were offering to take part in the actual mission, Kerry listed only Turkey and France.

Under questioning, Kerry conceded that the administration had more work to do to persuade Americans that U.S. military strikes on Syria are worth the risks. Kerry also promised that President Obama would address the American people from the Oval Office to lay out the case for intervention in another Middle Eastern conflict.