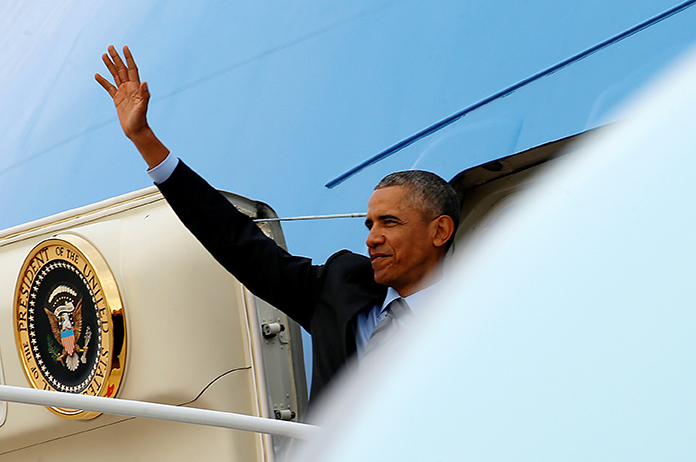 On the eve of the US-Gulf Cooperation Council (GCC) summit in Riyadh on April 21, Ebtesam Al-Ketbi, President of the Emirates Policy Center in Abu Dhabi, discusses key challenges in the United States’ relationship with its Arab Gulf partners, the cost of US disengagement, and the Iranian threat.

Ebtesam Al-Ketbi shared her views in an e-mail interview with the New Atlanticist’s Ashish Kumar Sen. Here are excerpts from the interview.

Q: Why is there this perception among Arab Gulf states that the United States today is a less reliable partner?

Al-Ketbi: The Arab Gulf states still consider the United States an important strategic partner, even the most important partner on the international stage. We also would like to continue to enhance this partnership. I don’t know if the Riyadh summit will succeed in reaching practical measures to boost confidence between Washington and its Gulf partners. It is evident that there are four common perceptions in the Arab region about the US policy in the Middle East:

1.  When the George W. Bush administration deposed Saddam Hussein’s regime in Iraq in 2003, Arab Gulf states supported this action. Iran, however, has since dominated Iraq. Today, Qasem Soleimani, the Commander of the Quds Force, which is part of Iran’s Revolutionary Guard Corps, has more influence over the Iraqi parties than Iraqi Prime Minister Haider al-Abadi or Iraqi President Fuad Masum. Furthermore, the lack of a balanced US policy in a post-Saddam Iraq has alienated and marginalized Sunnis, excluded them from fair national participation, and paved the way for the sectarian war in that country, which became a fertile soil for the rise of ISIS [the Islamic State of Iraq and al-Sham].

2.  US President Barack Obama’s reluctant policy in Syria and his silence towards the bloody oppression by Bashar al-Assad’s regime of the initially-peaceful Syrian uprising have prolonged the Syrian tragedy and enabled ISIS to establish the capital of its caliphate in Raqqa, which was used as a launching pad to occupy Mosul in Iraq.

3.  The United States and other world powers have not linked the nuclear deal with Iran, which the United Arab Emirates was the first GCC country to welcome, with a condition for Tehran to stop threatening regional security and interfering in the internal affairs of countries in the region. This has created a perception that Washington is turning a blind eye to Iran’s negative policies of supporting Shi’ite militias and feeding sectarian conflicts in the Arab region.

4.  There is a common perception in the Arab region that Washington is restricting its label of terrorism to Sunnis and is turning a blind eye to Shi’ite terrorism. The UAE thinks that ISIS and al-Nusrah Front on the Sunni side are equivalent in the level and gravity of terrorism to the Popular Mobilization Forces, the Badr Organization, and the Abu al-Fadhal al-Abbas Brigade on the Shi’ite side. Nobody can talk about malignant Sunni terrorism and benign Shi’ite terrorism. It is imperative to denounce and fight terrorism without exception.

Q: What has been the consequence of this perception of US disengagement? Are Arab Gulf states looking to diversify their strategic relationships?

Al-Ketbi: The Arab Gulf states are still convinced that cementing the US-GCC partnership serves the best interests of both sides. The American tendency to disengage from the region has opened the door for a number of international players to increase their presence and influence in the region, such as Russia, China, and India. Therefore, it is imperative for the Arab Gulf countries to reach out to these powers and try to diversify their strategic partnerships to protect their national interests and security. There is no doubt that these world powers will have a share of the American influence in the Middle East. The price of Moscow’s intervention in Syria will be paid in Ukraine and the West’s economic sanctions against Russia. More importantly, Washington’s disengagement from the Middle East raises a question about American values related to humanitarian intervention, preventing crimes against nations, and creating a balance between national security and the values of freedom and justice. There are concerns that American soft power will, more or less, suffer as a result of the shift in the US strategic assessment of the Middle East.

Q: In a recent interview with the Atlantic magazine, President Obama said Arab Gulf states need to “share” the Middle East with Iran. Do you agree?

Al-Ketbi: In this regard, we can point out three issues:

1.  It is not in the best interests of the UAE that Iran is designated a rogue state. Rather, the UAE, like the West, wants Iran to change, be moderate, and become a natural part of the international community. The UAE wants Iran to become an element of stability in the Middle East, not an element of tension by supporting sectarianism and militias, such as the Popular Mobilization Forces and Hezbollah.

2.  The UAE has no problem with Iran as a large and influential country with a positive influence in its neighborhood. The UAE has supported the nuclear deal with Iran out of hope that this agreement will contribute to changing Tehran’s behavior in the region. Unfortunately, however, this has not happened as yet.

3.  The UAE discourse is not based on giving up on Iran and its reform. The rising UAE role is not aimed against Iran. Instead, the UAE adopts the policy of reaching out to Tehran for cooperation and reciprocating Iranian goodwill. The UAE wants Tehran to prove its goodwill towards its neighbors.

Al-Ketbi: GCC states still insist that they share longstanding interests and cooperation with the United States that seem to be stronger than any common interests that Washington and Tehran may share. GCC countries do not intend to disrupt or hinder the implementation of the nuclear deal or stop the US-Iranian rapprochement. They do not either wish to see the animosity between Iran and the West continue for good. Rather, GCC nations do support former US Secretary of State Madeleine Albright’s assessment that rebalancing relations is the best term to use instead of “pivot to Asia” when describing the new trends in the US foreign policy.

The UAE believes that rebalancing relations can be best achieved through establishing a new security structure in the region that includes GCC countries, Iran, and possibly Iraq and Yemen. Following are the main pillars of the hoped for regional security structure:

1. No regional state would be accepted as the sole hegemonic power in the region. It is important for regional states to agree on a collective security framework that serves the interests of all stakeholders.

2. Respect for national sovereignty of other states and non-interference in their internal affairs.

3. All regional states should draw up a collective strategy for combating terrorism inspired by Sunni and Shi’ite groups.

Q: What do GCC countries, and specifically the UAE, expect from Riyadh summit?

Al-Ketbi: We hope that the summit will rebalance the US-GCC relations, and this can be accomplished if the summit makes the following decisions:

1. Agree on a roadmap to combat terrorism inspired by Sunni and Shi’ite groups. Practical plans must be developed to crack down on ISIS and al Qaeda, dry up terrorists’ financial resources, take measures against Hezbollah’s interference in Syria, disarm the Houthis in Yemen, and accept these two groups—Hezbollah and the Houthis—only as political parties. This means that international sanctions must be imposed on these groups should they refuse to lay down their weapons or submit to legitimate authorities.

2. The UAE would like to see US pressure mounting with the aim of achieving a just and durable peace in Syria, restoring stability to Iraq, and putting an end to the war in Yemen by disarming the Houthis and integrating them into the political process away from the Iranian agenda and the use of military force.

3. Tangible and practical steps and initiatives must be taken to enhance the GCC-US partnership through establishing joint action committees for defense and security affairs that emerged on the sidelines of the Camp David summit last May. It is hoped that the Riyadh summit will accelerate the implementation of the Camp David obligations, especially those related to the ballistic shield and maritime security issues.

4. Refraining from supporting regional terrorism, undermining stability, and militarizing the regional environment must be a prerequisite for giving Iran access to the international financial system.

Q: It is expected that ISIS will be among the major issues on the Riyadh summit agenda. What should the GCC countries be doing in the ongoing efforts to combat this terrorist organization?

Al-Ketbi: This question can be answered through paying special attention to the following points:

1. The UAE and GCC countries believe that there is a link between the ability of the regional and international community to find just solutions to the current conflicts in Syria, Iraq, the Palestinian Territories, and Libya, and the progress of efforts to combat terrorism.

2. The UAE strongly supports the reconstruction efforts in certain Iraqi provinces that were damaged as a result of battling ISIS. However, the UAE believes that the reconstruction process should be launched as a regional and international effort, and it is not the exclusive responsibility of GCC countries.

3. GCC countries believe that President Obama’s description of “free rider” does not really apply to GCC nations as Gulf partners want to significantly contribute to security burden-sharing to restore stability and defuse conflicts in the region. As such, the UAE strongly supports the effective involvement in the efforts directed to eliminate ISIS in Mosul in Iraq and in Raqqa in Syria. Therefore, the UAE is willing to enhance the capabilities of the Iraqi forces preparing for a major offensive against ISIS in Mosul or to get involved with Jordan in its efforts to isolate ISIS in Raqqa. However, priority is likely to be given to the battle against ISIS in Mosul over the one in Raqqa.

4. To turn a blind eye to Iran’s efforts to enhance sectarian polarization in the region would strengthen terrorist groups.

5. Iran and Hezbollah-backed terrorist networks exposed recently in the UAE, Kuwait, and Bahrain clearly indicate that the post-deal Iran has not stopped its endeavor to sponsor armed terrorist groups in order to destabilize the GCC countries. This also means that Tehran may turn against US and Western interests at any time.

Image: US President Barack Obama waves as he boards Air Force One upon his departure from Joint Base Andrews in Washington on April 19. Obama will attend a summit with Gulf Cooperation Council leaders in Riyadh, Saudi Arabia, on April 21. (Reuters/Kevin Lamarque)