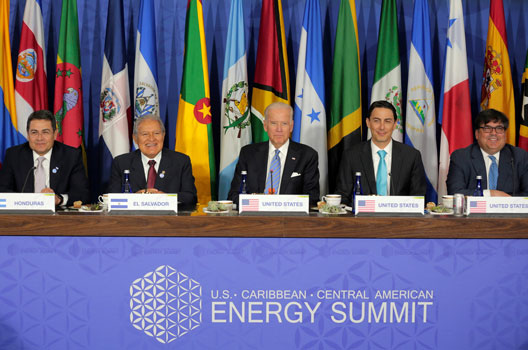 From left: Honduras President Juan Hernandez; El Salvador President Sanchez Ceren; US Vice President Joe Biden; US Special Envoy for the Bureau of Energy Resources Amos Hochstein; and Principal Deputy Assistant Secretary in the Bureau of Western Hemisphere Affairs Francisco Palmieri meet during the Central American Heads of Delegation Meeting at the US-Caribbean-Central American Energy Summit in Washington on May 4 of 2016 (Reuters/Joshua Roberts)

Since tumbling oil prices began to cripple the Venezuelan economy and hurt the efficacy of PetroCaribe— its oil exchange program—the US has launched strategic initiatives in the Caribbean aimed at providing policy and financial assistance to islands seeking to bolster their energy security. The United States’ broad financing initiatives are an important step in the right direction, but Washington should also look to better promote energy storage deployment throughout the region.

For energy-starved and import-dependent countries in the Caribbean, PetroCaribe was previously the only way to access discounted crude oil and attractive financing loans. Today, there is little incentive to participate, and many Caribbean nations have determined that they have a unique opportunity to transition away from expensive distillate fuels and diversify their energy mixes. The US has sought to facilitate this transition and fill the political vacuum left by Venezuela in the Caribbean through numerous programs and engagements. Since US Vice President Joe Biden launched the Caribbean Energy Security Initiative (CESI) in 2014, the US has worked with the Caribbean Community (CARICOM), the Overseas Private Investment Corporation (OPIC), and various federal agencies to develop a policy and financial framework to encourage energy infrastructure projects throughout the region. Currently, these efforts have culminated in the launching of the Clean Energy Finance Facility for the Caribbean and Central America (CEFF-CCA). Unveiled in May of 2016, CEFF-CCA is a 20 million clean power program aimed at mobilizing public-private investment in the energy sector.

Working with US partners in the Caribbean to strengthen their energy security will serve US interests. Geopolitically, the move will help improve relations with a region that has looked more favorably toward Caracas and Havana for political and financial support than toward Washington. Others argue that without a concerted effort to boost Caribbean energy security, future spikes in fuel costs could further hurt island economies, exacerbate migrant flows, and lead to a major humanitarian crisis. The region’s renewable energy transition, however, also provides energy storage companies with the opportunity to showcase their emerging technologies and develop new regulatory schemes that best fit the disruptive force of batteries on the grid.

The Caribbean’s natural geographic features—small, disconnected island communities—and generation systems—inflexible power sources, weak interconnections—create a challenging set of circumstances for policymakers and industry leaders. Modest population levels and sluggish macroeconomic growth make capital-intensive investments in island energy infrastructure like liquefied natural gas facilities (LNG) largely unattractive to outside investors. While LNG terminals are viable for larger states, the US government has acknowledged that natural gas is not a one-size-fits-all solution for the region. Conversely, funneling too much capital into intermittent renewables would subject Caribbean nations to more volatile electricity markets and intensify their reliance on dirty and expensive diesel plants.

Batteries have long been heralded as an elusive holy grail for clean energy systems, but the reality is that solid state batteries are currently in a position to begin competing with, or in some cases complement, existing energy technologies. Over the last five years, the rapid rate of innovation throughout the storage industry has allowed utility scale batteries to become increasingly viable on the open market. Since 2014, market prices for Lithium-ion batteries have almost halved to approximately 300 dollars per kilowatt hour, and companies like Tesla and AES will begin to benefit from economies of scale. Studies have estimated that when used in the appropriate settings, batteries can be cash positive even without tax credits or other subsidies.

Energy storage is not the sole remedy to all of the Caribbean’s energy issues, but it must play an important role in solving them. By efficiently storing kilowatts, batteries can improve renewable energy integration into island grids, alleviate peak demand ramping, and even offer basic ancillary support like frequency control. Reducing Caribbean utilities reliance on expensive and inefficient diesel powered generators free them to offer ratepayers affordable rates and thus invest more in solar and wind power. Through CEFF-CCA funding, renewables will constitute an increasingly larger share of the power generation pie in the Caribbean, but most would insist that battery storage will be essential to achieving roughly 28 percent renewable penetration by 2022.

While the US government and CARICOM have pledged to not advocate for one specific energy technology, battery storage is too fundamental to the Caribbean’s energy transition and US battery companies’ business development to not encourage. The US is already at the forefront of battery deployment, but regulatory uncertainty over the future of the grid, however, is the one inhibitor of future growth. The question for policymakers around the world is not whether battery storage is a viable energy source, but rather how regulatory bodies can best adapt the grid to the changing relationship between utilities and ratepayers. By facilitating battery deployment in the Caribbean, the region can drive innovative regulatory change and renewable energy implementation that can be replicated around the world. Battery storage will have an enormous impact on Caribbean energy security and the development of the future regulatory schemes across global power markets.

Nathaniel Sizemore is an intern with the Atlantic Council’s Global Energy Center.