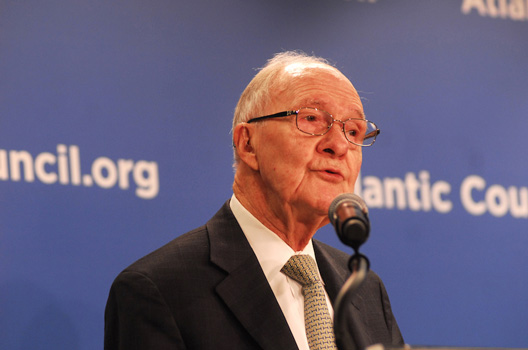 With the 2016 presidential elections a little over a year and a half away, analysts agree that the partisan bitterness consuming Washington is hurting US leadership on the world stage.

That bitterness reached a new low in March when a group of 47 Republican senators sent a controversial letter to the leaders of Iran warning them not to negotiate a nuclear-arms deal with the White House. US President Barack Obama said he was “embarrassed” for the senators.

“In my thirty years working in government, I’ve never seen as much rancor as I’ve seen today between the President and Congress,” said James N. Miller, a former Pentagon policy chief with the Obama administration. “We’re way past the point of humor.”

The bickering obscures Washington’s much bigger problem: an absence of vision when it comes to foreign policy, according to Miller and half a dozen others who spoke at a March 13 conference hosted by the Atlantic Council’s Brent Scowcroft Center on International Security.

“Since the end of the Cold War, there has been a lack of conversation surrounding the global role of the United States,” Atlantic Council Chairman Jon M. Huntsman, Jr., told an audience that included foreign ambassadors. “During the last couple of election cycles, foreign policy debates have been short-range in nature, stuck on specific hotspots and crises, with no long-term approach.”

To that end, Huntsman said the Council aimed to “inject strategic thinking into the nation’s much-needed debate leading up to 2016” through a new initiative that comprises five main components:

“We’re seeing individual and non-state actors—ranging from democratic revolutionaries to terrorists—play an outsized role on the world stage,” he said, putting Russia’s invasion of Ukraine and the Islamic State of Iraq and al-Sham’s “reign of terror” at the top of current global threats.

“Strategy is the framework that gets a state thinking about how to get where it wants to go, but first you have to know where you want to go. All too often, the United States pursues them both together, or in isolation from each other. And that we can’t afford now,” he added.

The US political system appears to be “fractured and unable to make decisions,” said Stephen J. Hadley, who served as National Security Advisor to President George W. Bush.

During the Cold War, the US’ “strategy of deterrence and containment worked out over time, pursued by multiple administrations—Democratic and Republican—and sustained by national consensus. That didn’t mean we didn’t fight about it, but the basic strategy was intact,” he said.

“Then of course, the Cold War ended, the Soviet Union collapsed, communism was discredited, and we thought the strategic argument was over and we had won, that our model of political democracy and free-market economy had emerged as the model for the international community. In some sense, we took a vacation from strategic thinking,” he added.

Then came the terrorist attacks on the United States on September 11, 2001, and the emergence of two “alternatives” to the US model: the attraction of religious-based totalitarian extremism in the form of ISIS and the examples of China and Russia, “an authoritarian vision, which fuses some economic vitality with basic political repression,” said Hadley.

“If all you do is crisis management, all you will get are more crises,” Hadley said. “Susan Rice [Obama’s National Security Advisor] is dealing with ten crises at the same time.”

Gen James L. Jones Jr., who served as Obama’s National Security Advisor from January 2009 to October 2010, said: “Our government was organized for 20th century challenges, but finds it difficult to deal with a rapidly globalized world. For me, the fundamental question is, where do we want to be in 2050? During the Cold War, the United States and its allies had a common strategy, but we argued over the right tactics. Today, we debate tactics, but lack a common strategy to guide our principles.”

“By August, Republican candidates will be debating each other,” said Biegun, reeling off the names of all 16 Republican politicians who have expressed interest in running for President. “I expect foreign policy to be a really big issue in this campaign, and I don’t think it was a very big issue in the last two campaigns. It’s going to be back with a vengeance.”

Image: “Strategy is the framework that gets a state thinking about how to get where it wants to go, but first you have to know where you want to go,” Brent Scowcroft, who served as National Security Advisor to Presidents Gerald R. Ford and George H.W. Bush, said at the Atlantic Council on March 13. (Larry Luxner / Atlantic Council)