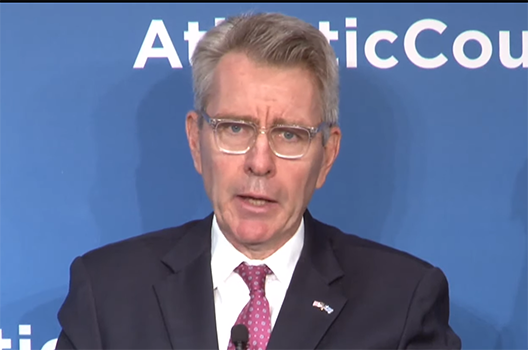 Ties between the United States and Greece are not at risk of weakening, regardless of the outcome of snap elections for the Greek parliament in July, Geoffrey Pyatt, the US ambassador to Greece, said at the Atlantic Council on June 11.

“I am confident that whatever the choice of the Greek people, we are going to continue to make the kind of investment [that strengthened] this relationship and continue to move it forward in a way that reflects both of our interests,” Pyatt said.

Greek President Prokopis Pavlopoulos approved Prime Minister Alexis Tsipras’ request for early elections on June 9, with the new contest to be held on July 7. Tsipras called the election after his Syriza party fared poorly in the May 26 EU parliamentary election. Opinion polls suggest that Syriza is set to finish behind the opposition New Democracy party, led by Kyriakos Mitsotakis.

Pyatt said that he had “absolute confidence in the positive trajectory of the US-Greece relationship. And I have no doubt at all that that will continue and accelerate in the event that the Greek people select Mr. Mitsotakis as the next prime minister.”

Pyatt’s confidence in the US-Greek relationship demonstrates just how far the alliance between the two countries has come in the past five years. Just a few years ago, Atlantic Council Executive Vice President Damon Wilson explained, Greece was facing “an extraordinary and devastating financial crisis, historic migration and refugee movements across Greece… and the unleashing of potentially radical politics.” Despite the panic many in Europe felt at the election of Tsipras in 2015, Wilson continued, “the United States stood by Greece in difficult financial times” and then worked to intensify US-Greek defense cooperation and to finalize the Prespa Agreement, which saw Greece end its nearly twenty-seven-year name dispute with its northern neighbor, now known as the Republic of North Macedonia. The agreement led to North Macedonia signing an accession protocol for entry into NATO on February 6, with possible formal entry into the Alliance by the end of 2019.

Washington has place renewed importance on building ties with Athens, Pyatt said, because it sees “Greece as a gateway for the wider region [and] a significant pillar of stability.” The success of the agreement with North Macedonia has demonstrated that Athens can be “one of our strongest partners in the longstanding American goal of building a Europe, whole, free, and at peace,” he added. As the United States confronts terrorism and migration challenges from the Middle East, an increasingly tense relationship with Turkey, and continued push to integrate the Western Balkans into the Euro-Atlantic community, Athens can serve as an important regional bridge, Pyatt argued.

The ambassador added that “as we look to a post-Brexit era, we are going to need strong partners in the European Union that recognize the importance of working with the United States, and Greece clearly understands that.”

Amid continued criticism from the Trump administration about the insufficient defense spending by European allies in NATO, Pyatt noted that “Greece is one of the few NATO allies to consistently meet its 2 percent Wales [Summit] pledge.”

Although many in the United States still view Greece through the lens of the devastating financial crisis of the last ten years, Pyatt argued that “nobody is taking about Grexit [a potential exit of Greece from the Euro system or the European Union itself] anymore. Greece has exited its bailout programs. The banking system has stabilized…[and] unemployment is at a nine-year low.”

George Chouliarakis, the Greek alternate minister of finance, said that after years of belt-tightening and tough reforms “the key macroeconomic imbalances that led to the crisis and also led to the exclusion of Greece from the international capital markets have been addressed.” Chouliarakis argued that in order to keep the Greek economy on the road to recovery, private investment, especially foreign direct investment, must continue to grow.

Simos Anastasopoulos, president of the American-Hellenic Chamber of Commerce, said that the strengthened ties between the United States and Greece has helped attract US companies to invest in Greece, allowing Greek companies to embrace a “new Greek growth model… based on exports and innovation.” US companies should be specifically interested in Greece, he added, because “Greece is not only a market of 10 million people. Greece is the central economic force for the whole Balkans and Southeast Europe.” Policy makers in Washington also have an interest in Greek economic recovery, Pyatt added, as “the healthier the Greek economy is… the more it is able to perform the strategic role of a strong NATO ally and a pillar of stability.”

Greece has also become “one of the strongest partners of the United States in helping to advance our agenda of European energy diversification,” Pyatt explained. The new Trans-Adriatic pipeline, which is on schedule to begin operations next year, is “the first new energy infrastructure built in Europe specifically to bring non-Russian gas to European consumers,” he said. New liquified natural gas (LNG) facilities have also transformed Greece into an important market for US LNG, while investments in wind and solar energy have made Greece “one of the great European success stories for renewables,” according to Pyatt.

The variety of roles Greece can play for US strategy in Europe and the Mediterranean means that the United States has “maintained a very bipartisan pillar of support for the US-Greek relationship,” Wilson explained. But the very real benefits for Athens has also meant, he added, that the importance of the alliance is felt in a “multiparty, bipartisan way in Greece itself, something so important as Greece heads into early elections in July.”

Although Chouliarakis said he did not want to speak for his colleagues in New Democracy, he felt that “the elections will be a non-event as far as bilateral relations [with the United States] goes.”

Image: Geoffrey Pyatt, US ambassador to Greece, speaks at the Atlantic Council on June 11, 2019.