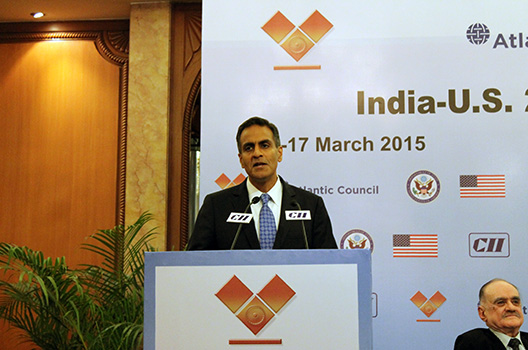 US Ambassador to India, Richard Verma, addressed a conference hosted by the Atlantic Council’s South Asia Center in New Delhi on March 16. The Vivekananda International Foundation, Confederation of Indian Industry, and US Embassy in New Delhi co-hosted the event.

Below is a transcript of the Ambassador’s remarks at the conference, “India-US 2015: Partnering for Peace and Prosperity.”

Thank you for the introduction General Vij.  Let me start by thanking the Atlantic Council, the Vivekananda International Foundation, and the Confederation of Indian Industry for cohosting this fantastic conference.  I am truly honored to be among such an impressive group of strategic thinkers.

Indian society has a long and rich history of thinking deeply about global affairs and regional stability.  All I have to do to be reminded of this is to look outside my window.  As many of you know, the U.S. Embassy is located in the Chanakyapuri neighborhood of Delhi, which translates as “City of Chanakya.” (But don’t test me on the rest of my Hindi!)  Chanakya was a renowned strategist and minister during the great Maurya Dynasty that ruled most of India almost two thousand years ago.  Many of his observations are still relevant today.

For example, Chanakya said that “the welfare of a state depends on an active foreign policy.” He also said that the definition of a “true friend” in international relations is someone who “shares a common objective” and “is helpful.”

Now, more than ever, the United States and India are recognizing that we share not only democratic values, but that we also share common objectives that will be best realized by becoming the true friends Chanakya wrote about.  Indeed, as President Obama said, the United States doesn’t just want to be India’s partner, we want to be its “best partner.”

President Obama and Prime Minister Modi also made clear their priorities for the relationship in the Declaration of Friendship they articulated during President Obama’s recent Republic Day visit.  In this Declaration, our leaders agreed to “elevate our long-standing strategic partnership.”  We now have what I call a “Strategic Plus” relationship with India.

What does “Strategic Plus” mean?  The United States and India relationship is not merely defined by a limited number of converging interests.  We now share a common vision – a vision of a more peaceful, prosperous, and stable world.  How we work together to achieve this common vision is what defines our “Strategic Plus” partnership.  We have “upgraded” our relationship, as the Prime Minister and President Obama have said.

Tonight, I would like to highlight three examples of our “Strategic Plus” partnership:  regional cooperation, space science cooperation, and defense cooperation.  We are not working together on these issues in an ad hoc manner, one based on short term aligning interests.  We are cooperating in a long-term, comprehensive way, one that underscores our new partnership.

The United States and India both recognize that regional integration is essential to security and prosperity.  For the United States, our relationship with Mexico and Canada, which was strengthened by NAFTA, is an example.  For India, I would note your longstanding “Neighbors First” policy and the increased emphasis on engagement in SAARC, including Foreign Secretary Jaishankar’s SAARC yatra and, of course, your Prime Minister’s travels this week.

But, as Chanakya said, a true friend also tries to be helpful.  In this vein, we are not here simply to applaud the Indian government’s forward-leaning approach toward its neighbors.  We are here to help, whether it is by together promoting a stable Afghanistan, together encouraging regional economic integration, or together bolstering good governance.

While the U.S. combat mission in Afghanistan is over, we will continue to be strong and reliable partners for the Afghan people, who have benefitted from India’s and our own generous assistance over many years.  Acting under Resolute Support Mission, U.S. forces in Afghanistan will have two primary missions in the coming years:  working with NATO counterparts to train, advise, and assist Afghan National Security Forces, and maintaining a counterterrorism capability.   We recognize India is a key partner in Afghanistan’s future, and cooperation and consultation between the United States and India in Afghanistan will continue to be close.  In that respect, we continue to have high-level discussions with India on the future of Afghanistan.

In their Joint Statement, President Obama and Prime Minister Modi underscored the importance of enhancing connectivity and enabling a freer flow of commerce in the region.  We strongly support efforts by India and SAARC to continue its pursuit of a South Asian Free Trade Area (SAFTA). A fully implemented SAFTA would represent one of SAARC’s most significant achievements.  The recent deal brokered between the United States and India to ensure implementation of the Bali Accord has also paved the way for a trade facilitation agreement which can bring tremendous benefits to the region by helping to harmonize customs regulations and procedures and reduce costs for small businesses to access regional and global markets.

The United States and India also recognize that economic connectivity by itself is not enough to create enduring peace and prosperity for the region.  We will work together with India in the region to strengthen transparent and accountable governance.  We welcome India’s effort to promote decentralization and reconciliation in Sri Lanka and support continuing efforts to encourage stable, democratic governance in Bangladesh and Nepal.

Finally, I note both our countries’ respect for the rule of law as a standard for resolving international conflicts.  In this regard, India recently demonstrated great leadership in promoting regional norms by respecting the July 2014 ruling under the UN Convention on Law of the Sea that delimited the maritime boundary in the Bay of Bengal, in Bangladesh’s favor.

The President and Prime Minister also recognized that India and the United States’ shared interest in promoting peace, stability, and security in the wider Indo-Pacific neighborhood as well, and memorialized that vision in a Joint Statement on the Asia-Pacific and Indian Ocean that called for our two nations to work with like-minded partners in the region on a number of shared goals.  These will include supporting regional economic integration, promoting accelerated infrastructure connectivity, and supporting rules-based order throughout the Indo-Pacific region.

Thus, while for years India’s Act East Policy and our rebalance to Asia were simply shared objectives, they are now part of a shared vision, one that defines our “Strategic Plus” partnership.

The United States and India don’t just see global issues through the same strategic lens.  We see the universe through the same strategic lens.  The United States and India have a long and successful history of space cooperation, demonstrated best by the successful Mars Orbiter Mission carried out last fall.  Bear with me as I try my hand at some Hindi linguistics, but I feel it is too meaningful to ignore.  Mangal means Mars in Hindi, but is also used to describe something auspicious.  Auspicious would be a good way to describe the cooperation between India and the United States on space science.

We have been working together on space science since 1963 when the first sounding rocket, a Nike-Apache carrying instruments for conducting ionospheric experiments over the earth’s magnetic equator, was launched from Kerala.

Thus, we are applying the strategic plus principal to this area as well.  Last September, NASA and ISRO (the Indian Space Research Organization) signed an implementing agreement to conduct a joint synthetic aperture radar mission in 2021.  The mission’s two radars will use advanced imaging technology to provide a detailed view of the earth by taking measurements of some of the planet’s most complex processes, which will improve our understanding of the impacts of climate change and advance our knowledge of natural hazards.  We are also working together on space navigation, communication, and weather monitoring systems.  The first session of the U.S.-India Mars Working Group was held in Bengaluru this January and both of our countries just convened the first Space Security Dialogue last week.  These are a few of the ways our science-based space cooperation will increase scientific knowledge, promote global interconnectivity, and bolster international security.

Back here on Earth, during Aero India I had the unique opportunity of observing members of U.S and Indian Special Forces complete a combined freefall jump from a C-17 airplane as part of a joint parachuting demonstration.  As I have said before, perhaps the truest test of a friendship between countries is the degree to which their armed forces trust and collaborate with each other.  And as a former Air Force officer, I can tell you that if we can trust each other while rapidly freefalling towards the ground, our relationship is moving in the right direction.

But this parachuting demonstration was just one very impressive display of what our robust defense relationship has become and where it can head.

No example better illustrates the new course of our collaborative relationship than the decision by the U.S. and Indian defense establishments and private sectors to pursue codevelopment and coproduction of defense articles.  The Defense Technology and Trade Initiative, or DTTI, aims to strengthen capabilities that are needed for the sustainment and modernization of our military forces and the growth of our economies.  Currently four pathfinder projects, plus working groups on aircraft carrier cooperation and on the exploration of jet engine technology cooperation are all in discussion as part of DTTI.  We also collaborate with each other through joint exercises such as our Malabar naval exercises and Yudh Abhyas, officer exchange programs, and training programs.  This is the type of defense collaboration the United States has with its closest partners.  Ash Carter, our new Secretary of Defense, was a driving force behind the DTTI, and I look forward to working with him and your defense leadership as we continue to build a military relationship that can help both sides continue to promote and protect our shared democratic values.

This is how we must view our “Strategic Plus” partnership.  If our strategic visions are aligned and if we are patient and reliable partners, if we continue to engage in the hard work our leaders envision, there will indeed be large gains in the future.  Not just for India and the United States, but for global peace, security, and prosperity.