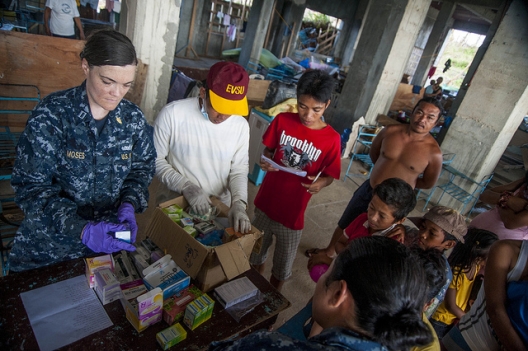 As post-typhoon operations in the Philippines illustrate, militaries do more than fight wars. Alongside the horrific photos from Tacloban, there are images of US cargo aircraft, helicopters, and service members delivering relief supplies and rescuing civilians.

As these relief efforts make clear, the US military is a key tool the president can use to support the Office of Foreign Disaster Assistance. An aircraft carrier can produce a million gallons of clean water a day, large deck space provides good staging areas for helicopters, and small boats designed for landing marines ashore are perfect for moving supplies into isolated areas where no adequate infrastructure exists. Further, the ships’ medical bays designed for treating battle casualties can accommodate pediatricians, obstetricians, and family practice physicians to treat typhoon victims. That it’s not necessary to beat warships into hospital ships is being proven in the Philippines.

Humanitarian assistance has been a regular feature of US naval operations for decades, but it was enshrined as one of six core capabilities of maritime power in the 2007 Cooperative Strategy for 21st Century Seapower. The goal of US maritime power is to prevent war and build partnerships through forward presence, deterrence, sea control, power projection, maritime security, and humanitarian assistance and disaster response.

The first four core elements have always been fundamental to a modern navy, and were essential elements to winning the Cold War. The last two capabilities, however, have been more controversial as scholars debate the proper use of military forces. Regardless of objections to “militarizing foreign policy,” by elevating maritime security and humanitarian assistance and disaster response, the sea services furthered US foreign policy goals. We see the positive side of this in the Philippines today.

Some commentators have highlighted the US response as a strategic win, but this neglects the important place of humanitarian assistance in US military strategy and the long-time partnership between the United States and the Philippines. While a diplomatic win is a stretch, it increasingly looks like China’s reaction (or lack of) revealed serious flaws in its foreign policy. As my colleague at the US Naval War College Jim Holmes wrote in the Diplomat, “If a nation worthy of soft power sends aid first and worries about politics later, a nation unworthy of soft power thinks about self-interest first….Its leadership dithers, debating whether there’s anything to be gained from alleviating human suffering.”

The clear winner in relief operations will be the Philippine people as they recover. Yet this difficult task would be harder if the United States did not have the capabilities and experience to support relief operations. Including disaster relief as a core capability of maritime power did not come easy, and will likely be challenged as the Navy shrinks, but through regular responses to earthquakes, floods, and typhoons, the US is proving its military can do much more than fight wars.

Derek S. Reveron, PhD, is a professor of National Security Affairs and the EMC Informationist Chair at the US Naval War College in Newport, Rhode Island. The views here are his own.