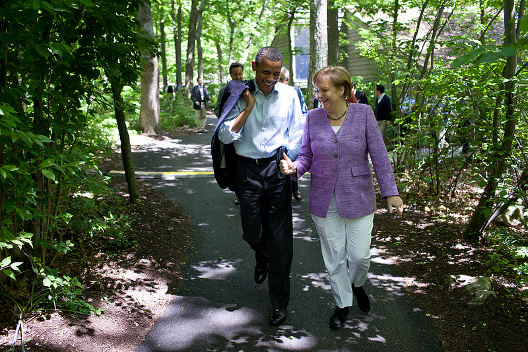 President Barack Obama talks with Chancellor Angela Merkel of Germany as they walk to Aspen Cabin during the G8 Summit at Camp David, Md., May 19, 2012. (Photo: White House/Pete Souza/Public Domain)

If Russia pursues and consolidates its armed seizure of Ukrainian territory in Crimea, the US and NATO have no politically viable option for reversing that advance by military force. What the West can do, however, is too modify Moscow’s calculations, making it more costly for Putin to sustain his aggressive effort to hold Ukraine within Russia’s orbit. This will require a united transatlantic front, for which the United States must in particular mobilize leadership from Germany.

The German government of Chancellor Angela Merkel has a critical diplomatic role because it is the one major European power with strong relations in all key directions. Berlin has special links to Moscow, in part through former Chancellor Gerhard Schröder maintains warm ties to the Russian leadership and through Germany’s strong energy partnership with Russia. Germany also has somewhat strong links with the Ukrainian opposition, a good relationship with Washington (despite the latest NSA scandal), and tremendous influence in the EU.

Germany so far has appeared reluctant to impose any far-reaching economic sanctions against Russia, in part fearing an escalation of the crisis and Russian retaliation. German Foreign Minister Frank-Walter Steinmeier has indicated that the West should pursue diplomatic outreach first and use sanctions only if those efforts fail. On Sunday, Merkel’s characterization to Putin of Russia’s invasion as “unacceptable,” and her proposal of a “fact-finding mission” on the issue (which was accepted by Putin) was an important first step, but it must be followed by additional German diplomatic outreach in Moscow.

The United States must now lead the West in a strong, united approach against Russia, and must press Germany to be a constructive player in this regard. This will require more leadership in the intra-European dialogue than President Obama has shown interest in so far. (His administration has stayed away from seeking to influence the European debate on the European economic crisis, for example.)

A solid transatlantic front must begin with consensus within the Group of Eight (G8) forum on its readiness to expel Russia. Germany has agreed with all seven other members to withdraw from preparations for the G8 summit conference that Russia is to host in Sochi in June, but Foreign Minister Steinmeier has cautioned against an expulsion of Putin’s government. Washington must push Berlin not to block that step.

The United States must press European countries (including Germany) to take further measures such as blocking Russia’s application to join the Organization for Economic Cooperation and Development. Washington also should lead in imposing tough visa restrictions and asset freezes against key Russian leaders and should threaten to isolate Russia from international trade and investment. Here, too, the US administration must push Berlin not to block these steps. The West must be able to negotiate with Russia from a position of strength.

Amid this major deterioration of the post-Cold War order in Europe, no one really expects the United States or NATO to go to war over Ukraine. But the West also must not back away, letting Putin have his way.

Whether it wants to be or not, the United States is still a leading player in Europe. Being a superpower means leading wisely and exercising the power that comes along with this position. And whether it wants to be or not, Germany is now the leading European player on the continent. For the transatlantic community to have any hope of deterring Vladimir Putin’s Russia, both of these governments must firmly take up their leadership roles. And it is President Obama who must ensure precisely this in the next few critical days.

Erik Brattberg is a resident fellow at the Brent Scowcroft Center on International Security at the Atlantic Council in Washington, DC.