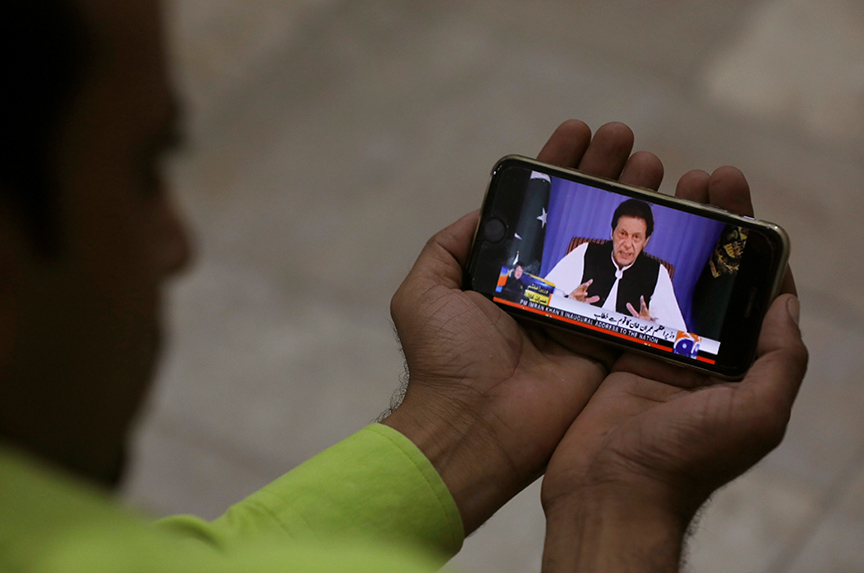 US Secretary of State Michael Pompeo and Chairman of the Joint Chiefs of Staff Gen. Joseph Dunford arrive in Islamabad on September 5 for a fresh episode of Mission Impossible: to bend Pakistani leaders into submitting to their wishes in the losing war in Afghanistan. They hope to persuade Pakistan’s newly minted prime minister, Imran Khan, and army chief, Gen. Qamar Javed Bajwa, to move against militants inside Pakistan, especially those who use Pakistani soil to fight the United States, NATO, and the Afghan troops in Afghanistan. A sense of déjà vu hangs over these talks.

On September 1, the US Department of Defense announced it was suspending $300 million of Coalition Support Funds (CSF) for Pakistan because of that country’s failure to take action against terrorists. This action followed a statement by Pompeo that the United States would not support International Monetary Fund (IMF) financing for Pakistan if Pakistan used those funds to repay Chinese loans related to the China-Pakistan Economic Corridor (CPEC).

The United States has been down this road before: trying to bully Pakistan into doing things that do not appear to suit Pakistan’s regional interests.

In early 2009, on his first visit to the region as special representative for Afghanistan and Pakistan, a well-meaning Richard Holbrooke criticized the role of the Pakistani military and intelligence agencies before leaving Washington with Chairman of the Joint Chiefs of Staff Adm. Mike Mullen for Islamabad. Holbrooke received a cold shoulder from the head of Pakistan’s Inter-Services Intelligence (ISI), Lt. Gen. Ahmed Shuja Pasha, and army chief, Gen. Ashfaq Parvez Kayani. Mullen was forced to return to Pakistan shortly afterward to mend fences.

That was a time when US financing for Pakistan was on an upward trajectory, approaching a peak of well over $4 billion a year in overt funding in 2010. Pakistan was moving more troops to its border with Afghanistan and getting financial support via reimbursements of its associated costs under the CSF. But it did nothing to evict the Afghan Taliban leadership or their followers from the border region.

Today, US financial leverage over Pakistan is virtually nonexistent. The $300 million being withheld is peanuts compared to Pakistan’s expenditure on the war against militancy within its own borders—a problem many Pakistanis believe emerged out of the US invasion of Afghanistan in 2001. The United States is already in arrears on CSF reimbursements to Pakistan. It is widely understood in Pakistan that CSF is not aid; it is payment for Pakistan’s services.

Pakistan made a series of mistakes in signing up to assist the US war effort, and by agreeing to CSF reimbursements rather than asking for direct support for its military in the form of equipment (especially helicopters), training, and spare parts, or a fixed amount without having to account for every penny spent. Over time, CSF payments dwindled as the United States increasingly rejected Pakistani bills.

A series of agreements and memoranda of understanding were hastily signed by Pakistani military officers and defense ministry officials who blindly acceded to US demands and accepted without demurral the texts of agreements crafted in the Pentagon. Over time, the United States began to ask Pakistan to do more. The Pakistanis pushed back and anti-American sentiment simmered.

In 2009, Reuters reported: “[Pakistani] Foreign Minister Shah Mehmood Qureshi said Pakistan wanted to engage with the United States with mutual interest and respect and he had flagged in talks with the Americans Pakistani ‘red lines’ that the United States should not cross.

“‘The bottom line is (the) question of trust,’ Qureshi told a news conference with Holbrooke and Mullen. ‘We can only work together if we respect each other and trust each other.’

“US commanders say tackling militant enclaves in ungoverned ethnic Pashtun tribal lands in northwest Pakistan, from where the Taliban launch attacks into Afghanistan and al Qaeda plots violence around the world, is vital to success in Afghanistan.

“At the same time, attacks by militants across Pakistan are reviving US concerns about the stability of its nuclear-armed ally.

“Pakistan for years used Islamists to further foreign policy objectives in Afghanistan and the Kashmir region, which both Pakistan and India claim.

That was what appeared in a Reuters dispatch in April 2009!  It is funny how the past has suddenly become prologue.

Early signals out of Islamabad seem to suggest that Pakistan thinks it can talk its way out of this current contretemps. After all Shah Mehmood Qureshi is once again Pakistan’s foreign minister. But Washington’s new muscular approach to foreign policy is built more on hope than reality. It hopes that a new prime minister facing serious economic difficulties will yield to financial threats.

After the meetings in Pakistan, Pompeo and Mattis will meet their Indian counterparts in New Delhi on September 6 to try to cement a new partnership with India, Pakistan’s arch rival. But they will face difficulty in trying to persuade India to drop its massive S-400 Triumf missile air defense system deal with Russia, let alone commit militarily to Afghanistan. Neither will they find resonance for their Afghan plans in Iran and China, two countries that are on US President Donald J. Trump’s hit list, nor in Russia that is also attempting to strike defense deals with Pakistan.

If the United States wishes to exit Afghanistan without a debacle on its hands and the region aflame, it will need all the regional partners it can find. Even a difficult Pakistan. Some of the old timers at the State Department could have told Pompeo that, but they are long gone. As the French say, so eloquently: tant pis!

Shuja Nawaz is a distinguished fellow at the Atlantic Council’s South Asia Center. He was the founding director of the center and is currently completing a new book on the US-Pakistan misalliance since 2008.

Image: A journalist watched a broadcast of Pakistani Prime Minister Imran Khan deliver an address to the nation in Karachi, Pakistan, on August 19. (Reuters/Akhtar Soomro)