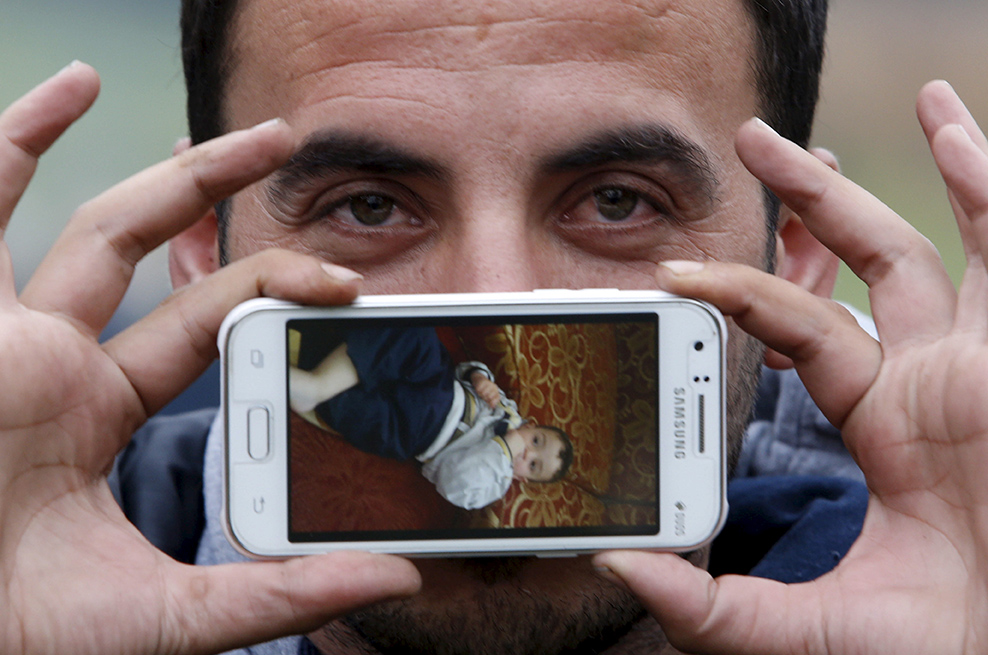 Sirad, a migrant from Zabadani, Syria, shows a picture of his son, Jad, as he waits to cross the Slovenia-Austria border in Sentilj, Slovenia, on Oct. 27. (Reuters/Srdjan Zivulovic)

Americans need to repudiate the “deeply offensive” anti-migrant rhetoric coming from Republican presidential frontrunners Donald Trump and Ben Carson that runs contrary to the founding principles of the United States of America, said R. Nicholas Burns, a former Under Secretary of State for Political Affairs.

“I think Donald Trump and Ben Carson, in particular, have made statements that go beyond the pale and that should be rejected by the American people,” said Burns, who is the Roy and Barbara Goodman Family Professor of the Practice of Diplomacy and International Relations at the Harvard Kennedy School of Government.

The candidates’ rhetoric is part of an alarming anti-migrant backlash that has followed the Nov. 13 terrorist attacks in Paris. One of the attackers had reportedly used a route frequented by Syrian migrants.

US President Barack Obama has called rhetoric a “potent recruitment tool” for the Islamic State of Iraq and al-Sham (ISIS). Yet, in a direct snub to the President, Republican as well as Democratic members of the US House of Representatives passed legislation that would require top US officials to vouch for each and every Syrian and Iraqi refugee allowed into the United States — a mission impossible.

The war in Syria has produced four million refugees. The United States has taken in a tiny fraction of that number — around 1,500. The White House has said it will take in 10,000 over the next year.

Burns described the response to the migrants as an “existential issue” for the United States. The United States should take in 65,000 refugees, he said.

R. Nicholas Burns, who is an Atlantic Council board member, discussed the migrant crisis in a phone interview with the New Atlanticist’s Ashish Kumar Sen. Here are excerpts from our interview.

Q: Are you worried about the anti-migrant rhetoric coming from some Republican presidential candidates and Governors, and the House bill that would make it virtually impossible to take in migrants from Syria and Iraq?

Burns: Frankly, statements by the some of the Republican presidential candidates are deeply offensive. I cannot remember senior American political leaders making such anti-Muslim statements in the past. It is contrary to the basic ethic of our country, to the promise that our constitution gives us that all people be treated equally regardless of their race, ethnicity, religion or gender.

We need leadership in both political parties. I think Donald Trump and Ben Carson, in particular, have made statements that go beyond the pale and that should be rejected by the American people.

Q: Do you agree with President Obama’s description of such rhetoric as a recruitment tool for ISIS?

Burns: I do. What ISIS wants is to create a battle in the minds of Muslims in the world between Islam and the rest of the world, Islam and Christianity, Islam and the West. If Muslims in the United States are hearing from political candidates and Governors of our states that our doors are closed, that we are not accepting refugees, that we are not going to accept Muslim refugees, or that mosques need to be shut down in the United States — as Donald Trump has suggested, that is a message that is going to repel that community. What they need to hear is a message of acceptance, a message that they are just as American as anybody else, and that they are not only welcome in this country but that Muslim Americans are making a great contribution to this country. This is a defining issue for our future.

Q: The Obama administration has agreed to take in 10,000 migrants over the next year. You have said the United States should take in as many as 65,000. What in your mind is a good policy toward migrants and why do you believe the United States needs to do more?

Burns: We are a refugee nation and an immigrant nation. Nearly everyone in this country has a family member — a parent, a grandparent, or a great grandparent — who comes from another country. We cannot dig a moat around this country and pull up the drawbridges. We would cease being America if we did that. We rejuvenate ourselves and we make ourselves anew when we accept immigrants and refugees.

President Obama has been a leader on this issue, but I think 10,000 is too few. We should take in at least 65,000 refugees and we should not close our doors. This number of refugees is half of the total the UN High Commissioner for Refugees has asked the nations of the world to accept in the next twelve months.

The bill that was voted upon by the House of Representatives, that the Senate will now examine, is a bill that will make it effectively impossible to keep our doors open to Syrian refugees. We know how to process people for refugee status in the United States. We have great experience in this. We have taken in more than 700,000 refugees since 9/11, and with very few problems.

It takes eighteen to twenty-four months of interviews, background checks, and security checks for people applying to be refugees to be accepted into the United States. It is a very stringent process. It is much more stringent than granting visas or the visa waiver program that we have with over thirty countries, particularly in Europe, that allows people to come in without visas.

Of course, we ought to be concerned about the security of our country. That is our foremost preoccupation, but I know from my experience in the State Department over two decades that we are exacting very strict security procedures as we look at refugees.

We should not fear refugees coming into this country. This is normal for us to take in refugees. We do need political leadership. I think President Obama has been a clear leader here and I would hope that he gets support in making sure that whatever bill emerges from the Congress — from both the Senate and the House — does not restrict the ability of the executive branch of the federal government to bring refugees into our country.

Q: What message do measures like the House bill send to countries like Lebanon, Jordan, and Turkey that have taken in the bulk of the migrants fleeing the war in Syria?

Burns: There are twelve million homeless among the Syrian population. More than half the country is homeless. While the majority of them are within the borders of Syria, you have millions of refugees in Jordan, Lebanon, Iraq, and Turkey. They are bearing the brunt of this crisis. And now, perhaps, a million or more refugees from Syria are making their way into Germany, the Netherlands, and other countries of Western Europe.

The United States cannot just stand by and watch the greatest refugee crisis since 1945 and not help shoulder some of the burden. That has always been our tradition through Republican as well as Democratic administrations.

I would hope that we could take in more than 10,000 refugees and I would hope that we would continue to accept refugees contrary to what so many of the Republican Governors have done, which is to say that they are going to try to close their borders. This is a federal authority. This is not the authority of the Governors of the fifty states. I hope my own Governor here in Massachusetts, Charlie Baker, will change his position and support the acceptance of Syrian refugees because the majority of the people in our state want refugees to continue to come into our country.

If we suddenly slam the door shut and close our borders to refugees I fear it will have a profoundly negative impact on the way that other people around the world see us. Most people around the world see the United States as the country that is a beacon of freedom. That is a place of refuge for those that are being persecuted, for those that find themselves caught up in wars. If we cease being that country, then we cease being America — the America that has been the world leader for the last seventy years.

Q: In comparison to the United States, how are our European partners reacting to the migrants?

Burns: We just need to look north of our border. Prime Minister Justin Trudeau of Canada reaffirmed that Canada will take 25,000 refugees. He made this statement after the Paris attacks. So Canada will take in more than twice the number of refugees than the United States and there is no question Canada will meet that commitment.

Germany will take in as many as a million refugees from Syria and other countries in the next twelve months. Britain will take in more refugees than the United States.

We are the largest economy in the world. We are a big country, 3,000 miles across. We have a tradition of taking in refugees. The American people are generous and openhearted. This is an existential issue for us. It defines who we are as a people. It is very important that President Obama be supported and that we continue to take in refugees. It strengthens, not weakens, our country.

Q: What support should be given to frontline countries like Greece to cope with the influx of migrants?

Burns: The United States has been the most generous country in providing funds to support the international refugee system run by the United Nations and hundreds of nongovernmental groups like the International Rescue Committee and Save the Children. A lot of those funds are going to support the Jordanian, the Iraqi, Turkish, and Lebanese governments that have borne the brunt of this crisis.

The European Union needs to think how it can support the frontline states within its borders. Greece is certainly the primary frontline state. Greece is broke. Greece is a country that is in economic meltdown. It is a country that is now the recipient of hundreds of billions of euros in financial assistance just to keep the economy going. It doesn’t have the money to pay for thousands of refugees coming across the Aegean Sea every day into the Greek islands and then trying to make their way up through Greece into the Balkans and then onto Western Europe. Greece needs greater financial support, and the European Union needs to reconsider its current regulations that designate the primary receiving state — in this case Greece — as the bearer of the financial costs of refugees.

The EU is facing a crisis of historic proportions and it needs to do a better job of supporting the countries of Southern Europe that are on the frontlines of this crisis.