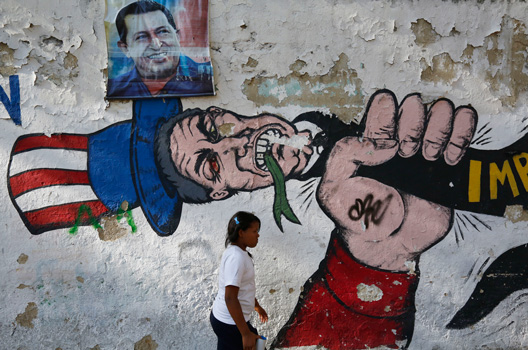 The Obama administration’s decision to declare Venezuela a national security threat and slap sanctions on seven officials from the oil-rich nation gives President Nicolás Maduro another excuse to blame the United States for his country’s economic plight, according to the Atlantic Council’s top two Latin America analysts.

The recent, dramatic drop in world petroleum prices has crippled Venezuela’s economy. In February, Maduro devalued the country’s currency, the bolivar, by more than 70 percent. Food shortages are rampant.

“Maduro is trying to shift the conversation from his laundry list of failures by using the concocted imperialist threat as a last ditch effort to unify the country around him. So announcing sanctions against seven officials allows Maduro to show that enemy number-one is the United States,” said Jason Marczak, Deputy Director of the council’s Adrienne Arsht Latin America Center.

Peter Schechter, the center’s Director, said the US action gives Maduro an excuse to become even more authoritarian.

“We’re going to get more repression, more opposition politicians arrested, somebody is going to float a balloon about postponing elections scheduled for later this year, and all of this will be done under the umbrella of ‘we need to create a warlike mentality against US subversion,’” said Schechter.

Sure enough, Maduro promptly asked parliament for expanded powers and defiantly appointed one of the sanctioned individuals, Gustavo Gonzalez, as his Interior Minister.

He also recalled Venezuela’s charge d’affaires in Washington for consultations. The US and Venezuela have not had representation at the ambassadorial level since 2010.

Maduro—whose popularity ratings have fallen to around 20 percent—has cracked down on the opposition, most significantly arresting Caracas Mayor Antonio Ledezma on February 19.

On March 2, the Venezuelan government demanded that the United States cut its embassy staff in Caracas. The measures announced in Washington this week were, however, “a long time in the works,” said Marczak.

Even though the US sanctions target seven officials and not the Venezuelan economy—that distinction will likely be lost on most of Venezuela’s 30 million inhabitants.

“How many people in Venezuela realize those nuances, especially when the press is controlled by Maduro and his cronies?” said Marczak.

Schechter and Marczak spoke in an interview with the New Atlanticist’s Ashish Kumar Sen. Excerpts below:

Q: What is your reaction to the US sanctions on seven Venezuelan officials?

Marczak: This has been a long time in the works. It is not the result of President Maduro’s actions two weeks ago, but it definitely ratchets up the increasing divide between Venezuela and the United States. What it has also shown, especially with our Cuba policy actions, is that Venezuela is now the biggest thorn in the side of the United States in this hemisphere.

The sanctions against the seven officials are exactly what Maduro wants because Venezuela’s economy is in a free fall. His popularity has sunk to a new low of 20 percent. But remember, this includes a built-in support base that will always support Maduro because they get subsidized housing, food, and other perks from the government. Among Venezuelans who don’t depend on the government for their daily subsistence, Maduro’s support is substantially lower.

Maduro needs to deflect attention from the horrific crisis that he has put the country in. That’s why you’ve seen a ratcheting up of pressure against the opposition, that’s why the Mayor of Caracas was arrested, that’s why other opposition figures are all targets of the government for their supposed collusion with the United States to depose Maduro in a coup.

Maduro is trying to shift the conversation from his laundry list of failures by using the concocted imperialist threat as a last ditch effort to unify the country around him. So announcing sanctions against seven officials allows Maduro to show that enemy number-one is the United States. Of course the sanctions are geared toward specific individuals and not toward the economy, but how many people in Venezuela realize those nuances, especially when the press is controlled by Maduro and his cronies?

Schechter: On the one hand, there are few countries that are more deserving of sanctions. This is an authoritarian government that is quickly becoming dictatorial, this is a narcostate, and it is a profoundly corrupt government.

On the other hand, putting sanctions on seven individuals really does very little and plays into everything that Maduro wants, which is to have an excuse to blame the United States for all the ills of Venezuela. If we want to send a message, let’s send a big message. Otherwise let’s not give him more weaponry to become even more authoritarian, dictatorial, and repressive.

All we will get out of this is radicalization from that government. We’re going to get more repression, more opposition politicians arrested, somebody is going to float a balloon about postponing elections scheduled for later this year, and all of this will be done under the umbrella of ‘we need to create a warlike mentality against US subversion.’

The Obama administration was under considerable pressure from Congress to impose these sanctions. The only explanation is that there are a number of Democrats who felt strongly that sanctions should be imposed on Venezuela.

Q: And did Maduro’s recent actions provide an opportunity for the United States?

If we are interested in sanctions we ought to think about sanctioning something that will hurt and that will send a clear message. I don’t believe that sanctions work in this case because they play into the hands of Maduro and the PSUV [the hardline base of the governing United Socialist Party of Venezuela].

Q: Is there a danger that doing something bigger could result in Maduro being replaced by an unknown entity?

Q: Do Venezuelans see US rapprochement with Cuba as a sign that the problem here may actually be Maduro?

Schechter: Maduro’s popularity is at 20 percent and his only possibility is to radicalize in order to cement the Chávez PSUV base, which is never more than 30 percent. He is not going for unity. The Chávez revolution has never been about unity, it’s always been about polarization.

I’m sure Mr. Maduro was very hurt by the fact that he was “the last to figure out” that Cuba was negotiating a détente with the United States. The government has what it feels is a true and tried system, which is to radicalize, polarize, and pit Venezuelans against each other and accuse the opposition of murder, subversion, toppling, coups, etc.

So the question is: Is this time different? The only reason why it is different is because of the profound economic crisis that Venezuela is in at the moment.

Marczak: The Venezuelan people are starting to see through Maduro’s constant drumbeat that the United States is behind all their problems. Even some Chávez supporters realize that this is a regime that is failing. Its sunshine period came during the commodity boom, but the country will unfortunately go down in history for the ability to squander its oil windfall.

Legislative elections later this year will add more pressure on the government. Whenever elections occur, the government spends an incredible amount of money on social programs to try to win votes. With the economy in the drastic state that it is, how will the Venezuelan government do that this year? And if they do, which they probably will, what will be the results’ affects on the Venezuelan economy?

Q: Cuba has supported Venezuela in its standoff with the United States. Will that complicate the US rapprochement with Cuba?

Schechter: I would hope not. I think the Cubans were in part pushed into a rapprochement with the United States because they saw what was happening in Venezuela. The Cubans are wholly dependent on Venezuela, not only for one hundred percent of their petroleum, but also for a substantial part of their export revenues because they import more petroleum than they use and export the rest. They see what’s happening in Venezuela, the economic meltdown, the drop in prices, the drop in production, and they are clearly worried about their dependence on Venezuela.

Marczak: The Cubans are incredibly dependent on Venezuela for their oil, for currency, and for the compensation for the tens of thousands of Cubans who work in Venezuela. The Cubans know that their economic lifeline continues to be Venezuela. That is part of the reason they are trying to diversify. They realize that the writing is on the wall with the days numbered that Venezuela will continue as a reliable benefactor.

The Cuban regime depends on taking a public anti-US stance. Just because they’re negotiating with the United States doesn’t mean they will all of a sudden start to support the US position. That doesn’t benefit them in the international community.

Q: The United States is Venezuela’s top trading partner. Does the current strain in ties affect that relationship?

Marczak: One of the ironies since Chávez came to power in 1999 is that we have continued to be Venezuela’s top trading partner. But energy dynamics in the hemisphere are changing. The United States is increasingly energy independent and Venezuela increasingly produces less oil and must give nearly half of its oil to repay loans from China.

The relationship is unlikely to change right now, but market forces independent of political forces are moving toward a situation where the United States will potentially need less Venezuelan oil.

Image: Anti-US graffiti is seen on a wall in Caracas on March 9, the day that the United States declared Venezuela a national security threat and ordered sanctions against seven officials from the oil-rich country. The US action gives Venezuelan President Nicolás Maduro another excuse to blame the United States for his country’s economic plight, according to the Atlantic Council’s top two Latin America analysts. (REUTERS/Jorge Silva)