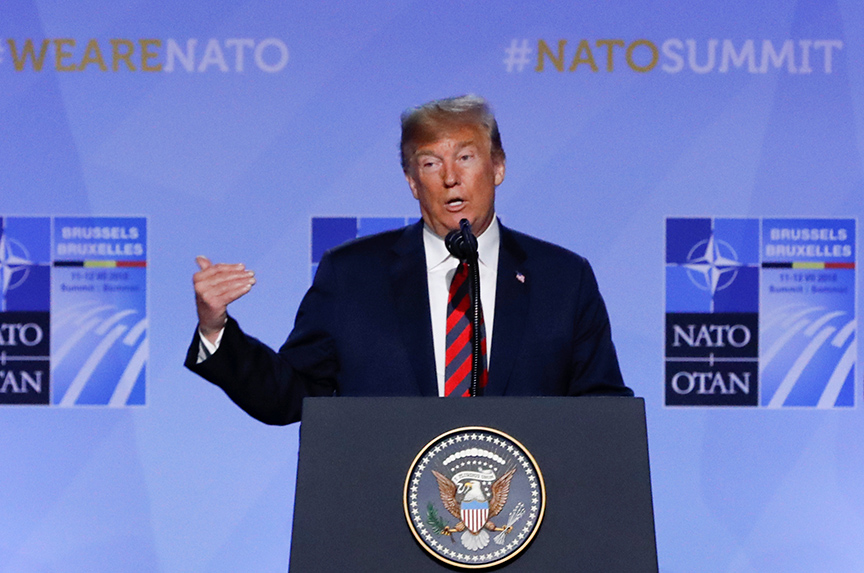 In Brussels, where US President Donald J. Trump has castigated allies and cast doubt about the US commitment to NATO, two US senators—one a Republican and the other a Democrat—speaking at the NATO Engages event co-hosted by the Atlantic Council on July 12 expressed their full-throated support for the Alliance.

“Congress has your backs,” said Sen. Thom Tillis (R-NC), co-chair of the Senate NATO Observer Group and a member of the Senate Armed Services Committee.

Tillis and Sen. Jeanne Shaheen (D-NH), co-chair of  the Senate NATO Observer Group and member of the Senate Foreign Relations Committee, participated in a discussion on “The US Role in NATO and the Future of the Transatlantic Bond” as news emerged that Trump had threatened to pull the United States out of NATO triggering an emergency session of the Alliance. Following that session, Trump said at a press conference that the United States’ commitment to NATO “remains very strong.”

“Let me tell you, there is no applause line for ‘Let’s get out of NATO,’” Tillis said. He doubted any member, including the United States, would consider withdrawing from the Alliance.

Tillis declared the NATO alliance as “strong” and said: “There is no doubt in the commitment of the US Congress to NATO.”

Shaheen echoed that sentiment, stating: “We are stronger with allies than we are alone.”

Shaheen said the reason she and Tillis traveled to Brussels to attend NATO Engages was to express US Congress’ support for NATO and collective security. “I appreciate the concerns that have arisen throughout Europe and in other parts of the world about some of the president’s statements—I can’t control those,” she said. “But what I can do is bring a message of where Congress and the Senate are with respect to support for NATO.”

Trump has been on a mission to get NATO allies to ramp up their defense spending. At the NATO Summit in Brussels this week, a heated discussion on this issue reportedly prompted the threat to withdraw the US from NATO.

Trump has suggested that allies double their defense spending goal from 2 percent to 4 percent of GDP—a goal most allies will find impossible to meet and worry a serious effort to enforce could break up the Alliance. NATO allies agreed at their Wales Summit in 2014 to spend 2 percent of their GDP on defense by 2024. Trump demanded that rather than wait for 2024, allies immediately meet this target. Currently, only four members of the twenty-nine-nation Alliance—the United States, the United Kingdom, Greece, and Estonia—meet the 2 percent goal. Latvia is expected to meet the goal this year.

The US Congress, meanwhile, has taken a starkly different approach to NATO—a military alliance that the United States founded in 1949 and that is credited with giving the West its longest period of peace without a major power conflict in centuries.

Earlier this week, the US House of Representatives and the US Senate passed resolutions in support of NATO. The House passed its resolution in a voice vote on July 11 while the Senate, in a 97-2 vote on July 10, overwhelmingly approved a motion of support for NATO.

Sen. Jack Reed (D-RI), who authored the nonbinding motion, said on the Senate floor: “No one should ever doubt the United States’ resolve in meeting its commitments to the mutual defense of the NATO alliance.”

“Unfortunately, this motion has become necessary because some of our closest allies have come to question the US commitment to collective self-defense. President Trump has at times called the Alliance ‘obsolete.’ Our allies are starting to wonder whether they can rely on the United States to come to their defense in a crisis,” Reed said.

House Speaker Paul Ryan told reporters that “NATO is indispensable. It is as important today as it ever has been.”

Besides pushing allies to up their defense spending, Trump stirred controversy early in the NATO Summit in Brussels by calling Germany “captive to Russia” as a result of its energy reliance. The US president continued his tirade against Germany on Twitter on July 12.

Democrats in Washington issued a rare joint statement condemning Trump’s comments. “President Trump’s brazen insults and denigration of one of America’s most steadfast allies, Germany, is an embarrassment. His behavior this morning is another profoundly disturbing signal that the president is more loyal to [Russian] President [Vladimir] Putin than to our NATO allies,” Senate Minority Leader Charles Schumer (D-NY) and House Minority Leader Nancy Pelosi (D-CA) said in a joint statement.

Despite Trump’s criticism of US allies he did not block a communique—like he did at the G-7 summit in Canada in June—that paved the way for Macedonia to start NATO membership talks and modernization of the Alliance to better address the threat posed by Russia.

Tillis and Shaheen were joined in the discussion by Paolo Alli, president of the NATO Parliamentary Assembly. Wolfgang Ischinger, chairman of the Munich Security Conference, which is co-hosting NATO Engages, moderated the discussion.

“I think NATO will be stronger in ten years if we make the investment we say we are going to make… I feel very optimistic,” said Tillis.

Alli, like the senators, was optimistic about NATO’s future.

Image: US President Donald J. Trump held a news conference after participating in the NATO Summit in Brussels on July 12. (Reuters/Yves Herman)