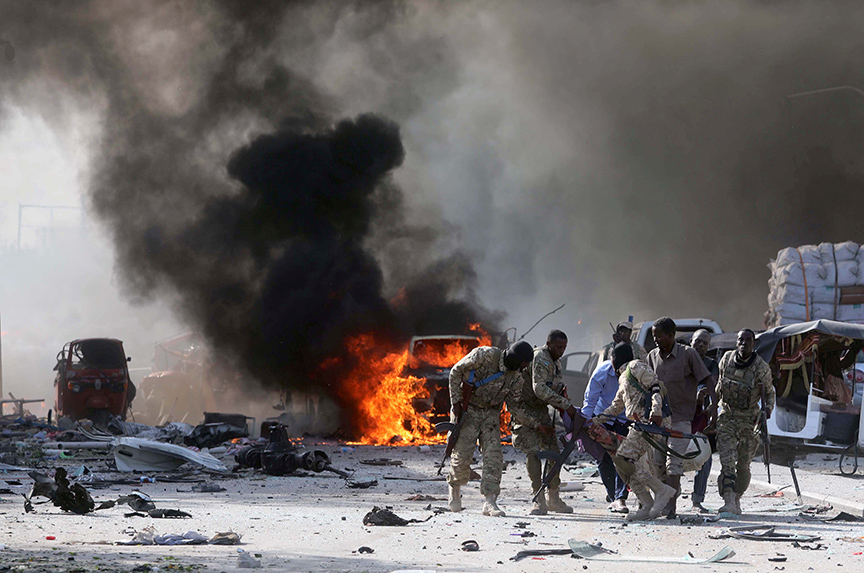 On November 3, the United States carried out two separate airstrikes against the Islamic State of Iraq and al-Sham (ISIS) in Somalia, the US Africa Command (AFRICOM) announced in a statement. The operations marked the first time that US forces have targeted ISIS militants in the conflict-ridden Horn of Africa country, where al-Qaeda-linked al-Shabaab has been the primary focus of American and partner efforts in recent years.

The strikes also underscore the shift in ISIS’ center of gravity following the group’s losses not only in Iraq and Syria this year, but also the routing of its affiliate in Libya last December. These developments have sent surviving fighters and arms flowing into more remote areas, including the Sahel, where the killing of four US Special Forces troops in an ambush in Niger in October focused attention on the new front lines of the fight. While most of the counterterrorism focus is on North and West Africa, where many ISIS recruits originally came from, the eastern side of the continent presents its own vulnerabilities.

The militants who were the target of the operations on November 3 are based in the northeastern part of Somalia, in the Galgala district of the semi-autonomous Puntland region. Here, in late 2015, a number of al-Shabaab militants led by Abdulqadir Mumin pledged allegiance to ISIS’ self-proclaimed caliph, Abubakar al-Baghdadi. Mumin, a Somali-born radical preacher, lived for years in Sweden and the United Kingdom before fleeing back to Somalia after coming under the scrutiny of MI5, the United Kingdom’s domestic counterintelligence and security agency. His remote mountainous camp enabled Mumin and his small band of followers to survive al-Shabaab’s ruthless campaign against ISIS encroachments in Somalia, but also enabled him to gather additional recruits to his Abnaa ul-Calipha group (or “Islamic State in Somalia” as it has been dubbed) from sub-clans marginalized by the Puntland regional authorities. When al-Shabaab sent a force to rein in the turncoat, local clan forces ambushed them, allowing Mumin to get away.

While al-Baghdadi has to date not accepted Mumin’s bay’a (pledge of allegiance)—ISIS has often waited until new groups proved themselves before granting formal recognition—Somali security officials have reported that the ISIS affiliate in Yemen has provided training, weapons, and other materiel. In August 2016, citing his expansion of “his cell of ISIL supporters by kidnapping young boys aged 10 to 15, indoctrinating them, and forcing them to take up militant activity,” the US State Department declared Mumin a “Specially Designated Global Terrorist” (SDGT).

Late last year, Mumin and his followers managed to seize and briefly hold Qandala, a port town on the southern shore of the Gulf of Aden with a population of nearly 20,000 in the Bari district of Puntland. Thus, albeit for only a few months before Puntland forces pushed them out, the black flag of ISIS flew over a not-insignificant territory in Somalia.

In March 2017, US President Donald J. Trump signed a Presidential Policy Guidance giving AFRICOM commanders enhanced authorities to carry out anti-terrorism operations in Somalia. To date, AFRICOM commander Gen. Thomas Waldhauser and his team have used the expanded targeting authorization judiciously to take out terrorists, including on November 3. Undoubtedly, they will be called upon to do so again, both against Mumin’s ISIS-branded group and against the larger al-Shabaab militants. (In a separate—but certainly not unrelated—development over the weekend, the US diplomatic mission, located inside the heavily-fortified international airport at Mogadishu, ordered non-essential personnel to leave the Somali capital because of a “specific threat.”)

While it is imperative to keep up the tempo of counterterrorism operations in order to eliminate threats and degrade the capabilities of militants, ultimately insurgencies like Somalia’s can only be defeated by political legitimacy—a test with which the internationally-recognized and rather generously-supported Somali government struggles. It’s hardly promising when a regime’s own auditor estimates that $20 million changed hands in the process that culminated in the selection of the current president, a fact that can hardly be expected to stir patriotism or otherwise inspire heroic efforts. Credible benchmarks and the political will to enforce them are desperately needed if the international community is to have a reliable partner to work with in Somalia, rather than just an additional liability.

J. Peter Pham is Atlantic Council Vice President for Research and Regional Initiatives and Director of the Council’s Africa Center.

Image: Somali armed forces evacuated their injured colleague from the scene of an explosion in Mogadishu, Somalia, on October 14. Nearly 300 people were killed in the double car bombing in Mogadishu, making it the deadliest incident in Somalia’s modern history. The attack came as US President Donald J. Trump’s administration made a renewed push to defeat Somali-based Islamist militants. US forces, for the first time, conducted airstrikes against the Islamic State of Iraq and al-Sham (ISIS) militants in Somalia on November 3. (Reuters/Feisal Omar)