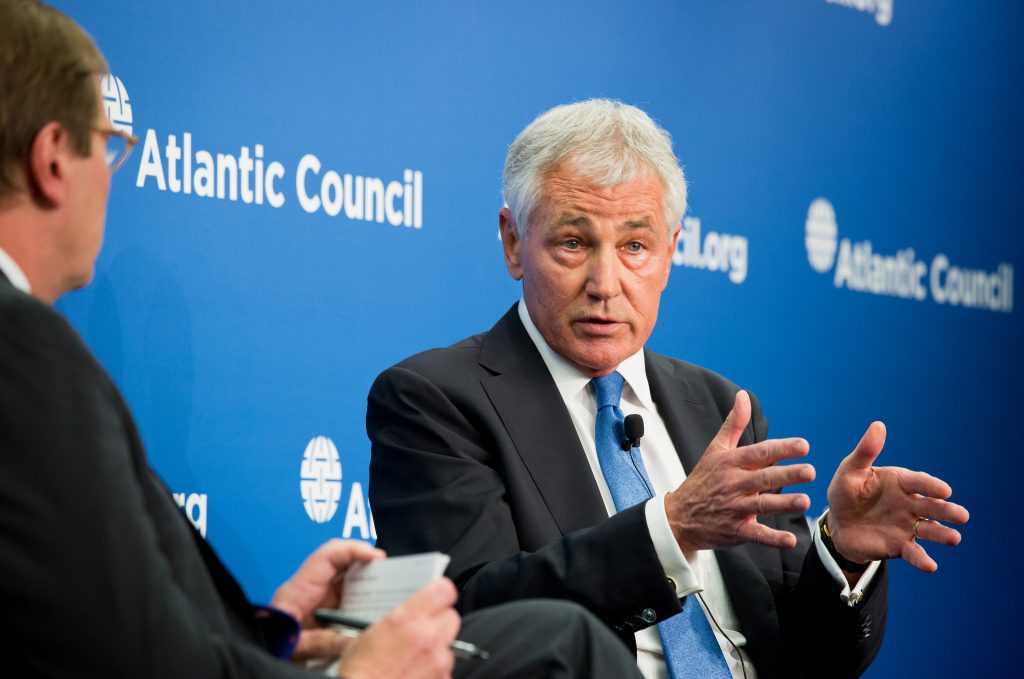 Former Secretary of Defense, Chuck Hagel, thinks that the Obama administration has become “paralyzed” by its rhetoric that Syrian President Bashar al-Assad must step down, said budget cuts have pushed the United States “perilously close” to being unable to maintain its military dominance, equated the Republican presidential campaigns to an amateur talent contest, and had some advice for Donald Trump: “focus on uniting this country, not dividing it.”

“We have allowed ourselves to get caught and paralyzed on our Syrian policy by the statement that ‘Assad must go,’” Hagel said at the Atlantic Council on January 13. “Assad was never our enemy. A brutal dictator? Yes.”

But, he added, important lessons should have been learned from the ouster of Saddam Hussein in Iraq and Moammar Gadhafi in Libya. Following Hussein’s execution in December of 2006, former Prime Minister Nouri al-Maliki’s divisive policies deepened the sectarian divide in the country and contributed to the emergence of the Islamic State of Iraq and al-Sham (ISIS). In Libya, the toppling of Gadhafi by rebels aided by a Western military campaign in 2011 plunged the country into a downward spiral of chaos from which it has yet to recover.

“You can take a brutal dictator out, but you better understand what you may get in return,” Hagel said. “We never asked that question: What is coming after Assad?”

Assad will eventually have to go, but “that should not hold us captive,” he added.

While the United States and Saudi Arabia have taken the position Assad must go, Russia and Iran hold the opposite view. This has been a key sticking point to finding a solution to Syria’s war, which is now in its fifth year.

It will take a collaborative effort involving the United States, Russia, Iran, and the Gulf Arab states to create a “platform of stability” in the Middle East, Hagel said.

A nuclear deal with Iran, reached between the Islamic Republic and the P5+1 countries—the United States, the United Kingdom, Russia, China, France, and Germany—last summer has led to some anxiety among Gulf Arab states.

Hagel, who supports the Iran deal, said the future of the agreement was briefly put at risk by the detention of US sailors who reportedly strayed into Iranian territorial waters earlier this week. Iran released the sailors on January 13.

“What happened in Iran did very much put in jeopardy the future of that agreement with this weekend being the beginning of the unraveling of those sanctions” on Iran, said Hagel. Had the sailors not been quickly released it would put a question mark over the fate of the sanctions, he added.

Hagel spoke in a conversation with Atlantic Council President and CEO, Frederick Kempe. Hagel, a former Chairman of the Atlantic Council, currently serves as a Distinguished Statesman at the Council.

Criticism of the White House

Hagel, a former Republican Senator from Nebraska and Vietnam War veteran, served as Defense Secretary in the Obama administration from 2013 until 2015. He was reportedly forced out over policy differences with the White House.

In an interview with Foreign Policy in December, Hagel was scathing in his criticism of the White House, which he accused of micromanaging the Pentagon and trying to “destroy” him. He also acknowledged serious policy differences with the White House on three main areas: Syria, Ukraine, and shutting down the military prison at Guantanamo Bay.

Hagel reiterated some of that criticism in his remarks at the Atlantic Council.

The former Defense Secretary, who has not refuted reports that he frequently clashed with National Security Advisor Susan Rice, accused the White House of micromanaging policy through the National Security Advisor and White House Chief of Staff. “Governing is not dominating. It is just the opposite,” Hagel said. “You need good people and you need to trust good people. If you don’t think they are good people and you don’t trust them you shouldn’t have asked them to come in to start with.”

Hagel described as chaotic and frustrating long White House meetings that were often populated by many participants. “If you want to bring in the best people you are not going to get the best people if they think that they are going to be constantly second-guessed, overloaded with micromanagement… or their time wasted in endless meetings,” he said.

Hagel was pointed in his criticism of US President Barack Obama on the issue of the red lines on the use of chemical weapons in Syria. Obama, Hagel said, had damaged his credibility when in August of 2013 he backed away from his threat to launch a military response if Assad used chemical weapons. Hagel said a careful and thorough assessment had found that Assad’s forces had, in fact, used chemical weapons.

“When the President of the United States says something, especially about foreign policy or about another leader of another country, that means something,” the former Defense Secretary said.

While critical of Obama’s Syria policy, Hagel did have some praise for his former boss.

Hagel gave Obama “a lot of credit for not overreacting” to Russia’s annexation of Crimea from Ukraine in March of 2014. He said Obama had walked “a very difficult line” on this issue amid a lot of pressure.

“This has been one of President Obama’s strongest foreign policy assets: he has not allowed the United States to get caught in downward drafts of crises,” he said. “Once you engage the United States military somewhere, you are engaged; and it normally doesn’t get less, it gets more.”

Obama was very clear that the United States was not about to go to war with Russia over Crimea. On this he and Hagel were in agreement.

However, Hagel said the Obama administration could have done more to provide non-lethal defensive weapons and equipment at a much faster rate to the Ukrainians. At the same time, he conceded that the administration had to be careful not to send a signal to the Ukrainian troops that the United States would come “charging in to their rescue.”

No military solution to ISIS threat

ISIS, which wants to carve out a caliphate, has spread beyond Iraq and Syria. The group now has affiliates as far away as Libya, Afghanistan, and Nigeria.

Hagel described ISIS as a bigger threat than al Qaeda, especially when it comes to ISIS’ exploitation of social media as a recruiting tool, strategic and tactical planning, funding, and use of ideology “in a very distorted way… clearly connecting with the disconnected and the disaffected and the alienated, particularly young people.”

Hagel said the former Maliki government bears considerable responsibility for ISIS’ rise because it squandered five years over which time it exacerbated sectarian divides in Iraq through divisive policies.

The United States is leading a coalition against ISIS that, through a campaign of airstrikes in Syria and Iraq, has succeeded in taking some territory from the militants. However, Hagel said, there is no military solution for dealing with ISIS. “You are not going to solve this problem by just continuing bombing… airstrike after airstrike,” he said. “You are talking about ideology, and history, and disaffection that you are not going to solve by bombing. You’ll make it worse.”

On the question of a congressional vote on the authorization of the use of military force, or AUMF, that would officially authorize war against ISIS, Hagel said Congress has a responsibility to vote. “My goodness. If the Congress of the United States can’t even put themselves on the record on something this serious, and yet the same people who refuse to vote or don’t want to vote or make excuses, go out and give campaign speeches about how terrible ISIS is and blaming the Obama administration for mishandling it and so on—that’s not just disingenuous, that’s dishonest,” he said.

Three days after Hagel assumed office at the Pentagon, sequestration—which imposes limits on government spending—went into effect. Does the United States have the budget and the military force it needs to maintain its position in the world, Kempe asked. “We are getting perilously close for me to say no,” said Hagel. “I think we are right on the edge, I’m afraid.”

The United States can do with fewer submarines and aircrafts, but it will pay the price for those cuts, not immediately but most certainly in the next five to ten years, said Hagel.

Once the crowded field of presidential hopefuls has been whittled down to two nominees they should be pressed on stating what they believe America’s role in the world is, what its security interests are, and how this will be funded, he added.

Advice for the candidates

Hagel equated the Republican presidential campaigns to “The Gong Show,” an amateur talent contest that aired in the 1970s and 80s. His advice to all presidential candidates would be to “focus on uniting this country, not dividing it.”

Noting that most of the leading Republican presidential candidates have focused on dividing America, he added: “That is dangerous. That’s not who we are.”

“I am not sure what the Republican Party is today,” he said. “It is not the party that I started out in.”

Hagel said one reason why he didn’t seek a third term in the Senate was the “chaos and absolutism” that has taken hold of both political parties, but especially the Republican Party. He summed up this absolutism as: “I am all right, all the time. You are all wrong, all the time, and you have nothing to say.”

Image: “We have allowed ourselves to get caught and paralyzed on our Syrian policy by the statement that ‘Assad must go,’” former Defense Secretary Chuck Hagel said at the Atlantic Council on January 13. Hagel spoke in a conversation with Atlantic Council President and CEO Frederick Kempe (left). (imagelinkphoto.com/Dennis Kan)