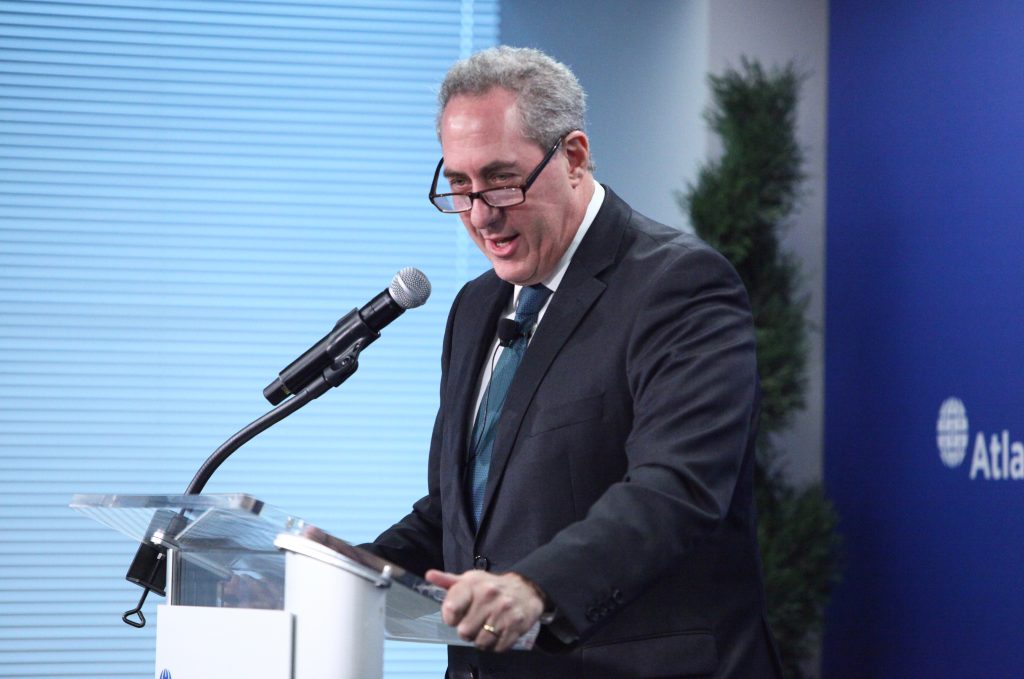 “At the end of the day, when people dig into the details and learn about what is in there… I am confident we will have bipartisan support ultimately for its approval,” US Trade Representative Michael Froman said of the Trans-Pacific Partnership (TPP) agreement negotiated by the United States and eleven other Pacific Rim countries. Froman spoke at the Atlantic Council on Oct. 27. (Atlantic Council/Victoria Langton)

A trade deal negotiated by the Obama administration and eleven other Pacific Rim countries, while not perfect, will eventually win bipartisan support from members of Congress, US Trade Representative Michael Froman said at the Atlantic Council on Oct. 27.

“We are heading into a critical period for this effort,” Froman said. “At the end of the day, the decision we have to make is whether we are better off with [the Trans-Pacific Partnership] or with the alternative future that we are likely to face? Economically and strategically the choice is clear.”

Froman delivered a strong pitch for the TPP. The deal will tear down trade barriers helping level the playing field for US companies and workers while making them more competitive; it will establish the rules of the road for trade that are consistent with US values and interests; US partners and allies in the Pacific Rim will be strengthened; and high standards set by the TPP will encourage sustainable growth and development in the region. The TPP will also force member countries to adopt higher labor and environmental standards.

The United States and eleven other Pacific Rim countries reached an agreement in Atlanta on Oct. 5 on the TPP, the largest-ever regional trade accord in history. Besides the United States, the deal includes Canada, Mexico, Peru, Chile, Japan, Vietnam, Brunei, Malaysia, Singapore, Australia, and New Zealand.

The deal has piqued the interest of other governments as well, Froman said while describing TPP’s “magnetic effect.” The clearest declaration of this interest came from Indonesia’s President, Joko Widodo, who said during a White House meeting with US President Barack Obama on Oct. 26 that his country intends to join the TPP.

In the United States, the TPP has attracted bipartisan support as well as criticism.

Most prominently, Hillary Rodham Clinton, who as Secretary of State had supported the TPP, has come out against the deal as a Democratic presidential candidate. She agrees with critics of the deal who say that it will not create jobs or raise wages for American workers.

“It is not a perfect agreement,” Froman conceded in a discussion that included Daniel R. Russel,​ Assistant Secretary of State for East Asian and Pacific Affairs, and was moderated by Jason Marczak, Deputy Director of the Atlantic Council’s Adrienne Arsht Latin American Center.

“Right now, our focus is on finalizing the details [of the agreement] and getting it out there in public so that people can read it, analyze it. I am sure it will get picked apart,” said Froman.

But, he added, “at the end of the day, when people dig into the details and learn about what is in there… I am confident we will have bipartisan support ultimately for its approval.”

Once Obama notifies Congress of his intent to sign the agreement, it will trigger the publication of the text and the start of the 60- and 90-day review periods required under the Trade Promotion Authority (TPA) statute. The Obama administration is preparing the ground for this process with an eye firmly on the political calendar.

“We are going to work with congressional leadership… on the precise timing, but we want to make sure we’re taking all the necessary steps to have it ready when a window appears for Congress to take it up,” said Froman.

What would be the implications of Congress’ failure to approve the deal?

“It will raise real questions about the ability of the United States to continue to lead,” said Russel.

Froman said he was hopeful that concluding the TPP would add momentum to another effort by the Obama administration—that of negotiating a Transatlantic Trade and Investment Partnership (TTIP) deal with the European Union.

“We are able to chew gum and walk at the same time,” Froman said in response to a question on whether the focus on TPP will slow progress on TTIP. “But having completed TPP, hopefully will give greater momentum to these negotiations,” he added.

Jon M. Huntsman, Jr., Chairman of the Atlantic Council, described the TPP as a “game-changing deal.”

Huntsman, a former Governor of Utah who has also served as Deputy US Trade Representative, said in his introductory remarks that finalization of the TPP represents a major economic and strategic breakthrough for the United States that raises the bar for trade in areas like transparency, good governance, and labor and environmental protection.

The deal “also bolsters our own economy… while also cementing partnerships with key Asian and Latin American markets,” he said.

The TPP is as much about trade liberalization as it is about balancing China’s economic ascent.

China conducts large volumes of trade with countries in its neighborhood, including Malaysia, Vietnam, and Japan—all of which are part of the TPP. The higher standards required by the TPP are likely to affect this trade.

Russel described the TPP as the “economic component and the crown jewel” of the Obama administration’s rebalance toward Asia. It “anchors” the United States to a region that is “absolutely vital to our security and to our national well being,” he said.

The agreement is seen in the region as a “proof point” that the United States is determined to lead and in the Asia-Pacific region to stay, he added.

Huntsman, a former US Ambassador to China, said he was most in favor of the deal for what it represents for America’s future in the Asia-Pacific region. “At a time when US-China relations are at a crossroads, the TPP agreement reaffirms our position in Asia and provides an opportunity to redirect China, potentially paving the way for much broader cooperation,” he added.

China’s attitude toward the TPP has undergone a transformation from initial hostility to profound interest, said Russel.

Insisting that the trade deal is in no way anti-China, Russel said: “This is an affirmative establishment of high standards that I think in the near term is going to force all countries, whether they are partners in TPP or not, to up their game.”

“The world would be a better place by far if China were able to and willing to meet the very high standards of TPP,” he said. “The broader impact on the region and on China is going to be to drive a virtuous cycle of better regulatory practices, greater transparency, openness in the Internet, and these factors are motivators.”

“While it is not a zero-sum proposition, the fact of the matter is TPP pushes against a tendency in the region to follow the path of least resistance,” he added.