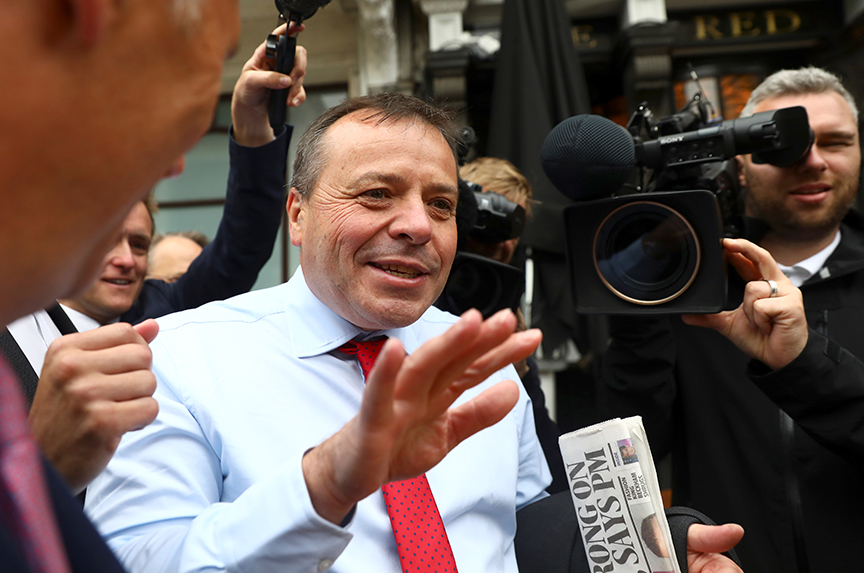 An opportunity arises from the British Parliament having voted to delay Brexit. If the British government gets approval from the European Union next week for an Article 50 extension, the months ahead should be used to finally get to the truth about the opaque sources of money spent in the 2016 referendum before implementing its results.

This will only happen if British politicians and investigators prioritize quickly getting the public more conclusive answers. And it is important because the evidence revealed thus far raises the suggestion that the 2016 referendum on whether the United Kingdom should remain in the EU was targeted by a foreign adversary violating British sovereignty to undermine its democracy.

The facts so far

Nigel Farage’s Leave.EU campaign received the largest political donation in British history from UK businessman Arron Banks. The ultimate source of the £8.4 million donation is obscured through a network of insurance firms and gold mines controlled by Banks, hidden behind layers of offshore shell companies revealed in the Panama Papers.

Banks criticized the Electoral Commission as being “under intense political pressure from anti-Brexit supporters,” while adding that he is “confident that a full and frank investigation will finally put an end to the ludicrous allegations leveled against me and my colleagues.” He insists that there was “no Russian money or interference of any type,” and the money came from him and was generated in the UK, although he has dodged questions about which of his companies generated the income and investigative journalists have had difficulty verifying his sources of wealth.

Other British investigations into the funding and spending of the pro-Brexit campaigns have proceeded at painstakingly slow fits and starts across the Metropolitan Police, the Financial Conduct Authority, and the Serious Fraud Office, while Banks’ communications with Russian diplomats and the Trump campaign are also reportedly under review by US Special Counsel Robert Mueller.

Almost all of the publicly known evidence has been unearthed by investigative reporters. Most striking has been the multiple times in the months before the referendum that Banks met with the Russian ambassador to the UK. A Russian diplomat later expelled from Britain as a suspected spy originally connected Banks with the ambassador, who in turn introduced him to a Russian metals and mining oligarch. Banks provided shifting explanations around how many times he met with the Russians (at first only admitting to one such meeting, and later conceding to three and then subsequently revising that up to four). The Russian embassy  denies interfering in the referendum and insists there is nothing sinister about these contacts. However, Luke Harding, a British journalist formerly based in Russia, concludes that “the evidence indicates that the Russian embassy ran a major operation to cultivate and support Banks in the crucial months leading up to the vote.”

In these meetings, the Russian oligarch offered Banks a chance to invest in six Russian gold firms through a structure that would potentially generate several billion dollars in profits. Banks reportedly visited Moscow in February 2016 to meet senior officials at the Russian state-owned bank providing the financing for the deal, which was announced just twelve days after the Brexit referendum. Soon after the deal was consummated, he tweeted “I am buying gold at the moment & big mining stocks.” Moreover, earlier this month new reports revealed that Banks eagerly pursued the deal to the point that a Swedish shell company was identified to handle it. Banks now insists that “potential investment opportunities were assessed and rejected at the time” and it has not been proven otherwise.

The Russians also offered Banks limited opportunities to invest in Russian state-owned diamond company Alrosa, which ended up pricing well below market levels, and another goldmine in Guinea. Banks originally either declined to mention these offers or said he had no memory of them, and later acknowledged them while maintaining that he did not invest in them.

Banks also has personal ties to senior Russian figures, including a father-in-law who is a Russian regional official.

Banks’ Leave.EU campaign was launched with an introduction to Farage and funding from Banks’ long-time business partner, Jim Mellon, who got rich in Russia in the 1990s and is now based on the Isle of Man. His funding for Leave.EU was separate from Banks’ donation and there are no allegations that Mellon broke the law. A representative for Mellon said during the Brexit campaign that he has not been involved in Russian investments since the 1990s and has no relationship with Russia. A recent report revealed that firms in which Mellon has major interests continued to invest in Russia over the years, adopting a strategy of investing in companies with “management close to Putin,” and that Mellon met the Russian ambassador several times over the past few years. Mellon points out that he had no executive role or direct involvement in investment decisions at the firm with the most Russia ties, Charlemagne Capital, although he did serve as a co-founder, non-executive director, and major shareholder (exposure that Mellon points out has declined since the referendum). The New York Times reported that three weeks after the referendum Charlemagne Capital participated in the deeply discounted private placement of Alrosa shares that Banks says he turned down. Mellon says he only learned about the deal last year from a reporter.

Lastly, another former business partner, Chris Kimber, alleges that Banks traveled to Russia in 2015, where he sought financial help for his struggling South African diamond mines, and that the money was raised and redirected into the Brexit campaign and other interests. Banks “fully disputes” these accusations as also being “ludicrous,” casting Kimber as “hardly a reliable witness” who made the allegations in response to a lawsuit filed by one of Banks’ companies.

More broadly, a Russian espionage operation funneling money into a political campaign aimed at unwinding European integration would be entirely consistent with the Kremlin’s perceived political interests and tactics of hybrid warfare. Covert financial infiltration is part of a toolkit Moscow uses to interfere in European and American politics. Another tool deployed ahead of the 2016 referendum was pro-Brexit messaging pumped out by RT, Sputnik, and the Internet Research Agency.

Russian President Vladimir Putin seems to believe that these so-called active measures to undermine Western democracies can help maintain his grip on power at home by highlighting an enemy at the gates as justification for domestic repression, by undermining liberal democracies generally and EU institutions specifically as attractive alternatives to his authoritarian rule, and by persuading Russians that his aggression abroad has created space on the world stage for Russia’s restoration of greatness.

None of this demonstrates or proves wrongdoing by Banks or anyone else. What it does reveal is a set of important unanswered questions around whether the pro-Brexit campaign was cultivated or supported financially by Russia. Carole Cadwalladr of The Observer says, “We’re in an extraordinary position where we know the entire campaign may have been funded illegally by foreign actors and both the government and the opposition are prepared to leave on this basis.”

It may be difficult for British investigators to develop comprehensive answers in just a few months. The UK Electoral Commission probe took one year, while the Mueller’s investigation is closing in on two years. More thorough investigations would be possible if Britain and the EU agree on either the one-year Brexit delay former British Prime Minister Gordon Brown recommends to fully consider Brexit options or the twenty-one months that some EU officials say is required for more comprehensive negotiations, but British Prime Minister Theresa May and many others are uninterested in another year or two of Brexit negotiations.

Nevertheless, if a long Brexit delay and accelerated investigations are bad, even worse is the risk of leaving the EU only to learn later that the campaign was financed in large part by dark Russian money. That is why similar questions about how far Russian espionage reached into the 2016 US campaign are likely to be answered by Mueller before the 2020 presidential election takes shape —the public needs to know before making further decisions.

Thus, investigators should use any Article 50 extension to develop findings quickly and share what they know with the public before Brexit is finalized. And British leaders should encourage investigators while also identifying this as a factor supporting a substantial Brexit delay. Britons deserve nothing short of full truth and sovereignty when deciding whether to turn away from European integration after forty-six years.

Image: Arron Banks, who ran the Leave.EU pro-Brexit referendum campaign, arrived to give evidence to the Digital Culture Media and Sport Parliamentary Committee in London on June 12, 2018. (Reuters/Simon Dawson)