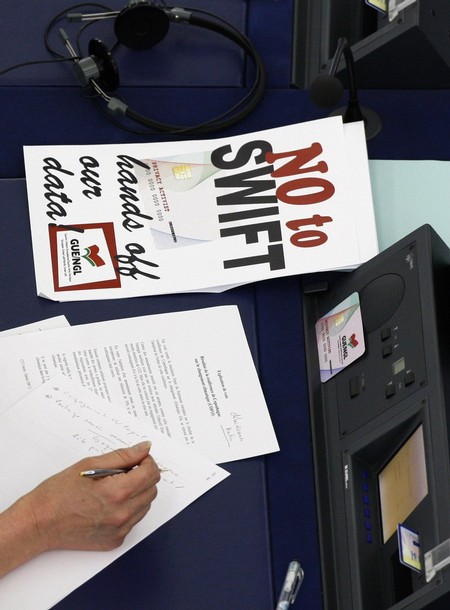 The United States and the European Union have signed a bank data-transfer agreement that will give U.S. authorities access to EU bank transfer data, under EU supervision, in an effort to combat terrorism. In an e-mail interview, Kurt Volker, Atlantic Council senior adviser, former U.S. Ambassador to NATO and managing director of the Center on Transatlantic Relations at Johns Hopkins University, explains the importance of a U.S.-EU bank-data transfer agreement.

WPR: What is the background of the current dispute?

Kurt Volker: In the days and years after Sept. 11, 2001, the United States and Europe worked together to track terrorist financing, in order to identify terrorists and prevent future attacks. One means was to sift through millions of transaction records recorded through the bank transfer system, SWIFT.

When European publics became aware that financial transactions were being accessed and reviewed by U.S. authorities, there was an immediate outcry for privacy protection. This outcry occurred in the inflamed political climate of European public opposition to the Iraq War, and the unpopularity in Europe of President George W. Bush.

The U.S. and EU both have strong domestic privacy protections, so the two sides (with the EU represented by the European Commission) were quickly able to reach an agreement on financial data sharing that addressed privacy concerns. However, when the Lisbon Treaty took effect, the European Parliament — catering to populist sentiments and seeking to assert its own role within the EU system — rejected the U.S.-EU deal and insisted on new negotiations. This shut off data flows, putting millions of lives at greater risk. The new agreement — if approved by the European Parliament — will get this data sharing back on track.

WPR: How important is this agreement to counterterrorism efforts?

Volker: It is vital. Terrorism is not like other crimes. The perpetrators are often willing to die in the act, and the consequences for society — mass murder and major disruptions — are severe. This means the key to fighting terrorism is prevention. We have few tools to prevent terrorism: intelligence, border controls, positive identity documentation, physical security checks, and so forth. But terrorists need funding to prepare and carry out attacks, so tracking and identifying financial flows in advance of attacks is another critical tool for keeping the public safe.

WPR: What are the implications for future U.S.-EU cooperation in counterterrorism as well as other intelligence- and security-related efforts?

Volker: If this agreement is approved by the European Parliament — which now appears likely — it should re-establish a firm basis for U.S.-EU cooperation in fighting terrorism, in the financial area and beyond. If it is not approved, however, it will inject a serious disruption in cooperation and a renewed lack of U.S. trust in European efforts to help protect our publics.

Kurt Volker, a senior adviser at the Atlantic Council, is a former US ambassador to NATO and current managing director of the Center for Transatlantic Relations at Johns Hopkins University’s School of Advanced International Studies. This piece first appeared on the World Politics Review blog. Photo credit: Reuters Pictures.