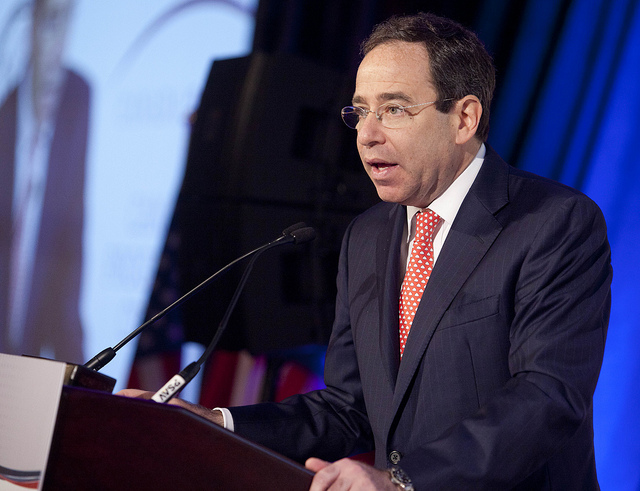 Deputy Secretary of State Thomas Nides declared that “the US-European economic partnership is key to everything we want to do together around the world” and together “we must use sanctions and the like to pressure those who break international rules and threaten international security, and we must use economic incentives to drive political reform.”
Speaking today at the Wroclaw Global Forum, he emphasized “Economic Statecraft,” the Obama administration’s label for “the renewed focus on economics within our foreign policy.”  Liles argued that, ” Strong economies hold out the promise of successful nations. Strong economies fund strong budgets for diplomacy, development, and defense. And so, in a world of many powers, the trans-Atlantic alliance must rest on a foundation of economic strength”

Seemingly walking back somewhat from the administration’s recently announced “pivot” to aside, Liles asserted, “Europe must be at the center of our economic renewal. A sober assessment of our economic interests, and a clear focus on economic statecraft, leads us squarely back to our partner of choice on so many global challenges: Europe.”

Given our shared values and combined economic might, Liles said “America and Europe must use economic tools to tackle strategic and diplomatic challenges” because “our focus on economics is not just about creating jobs in our own countries, it’s also about using economic strength to advance our strategic interests around the world and to build a more stable future for everyone.”

To a large extent, of course, we’ve been doing this for decades. The West dominated global institutions, especially economic ones, for most of the postwar period. The World Trade Organization and its predecessor Global Agreement on Tariffs and Trade were an expression of the transatlantic way of doing business.

The rise of the BRICs, especially China–which is both the most powerful rising economy and the one that least adheres to longstanding global norms–makes transatlantic cooperation all the more necessary. The ongoing standoffs with Syria and Iran, for example, point to the ineffectiveness of the United Nations when China and/or Russia stand in the way. The combined power of the EU and the United States–easily the top two economies on the planet–can provide a powerful workaround if harnessed.