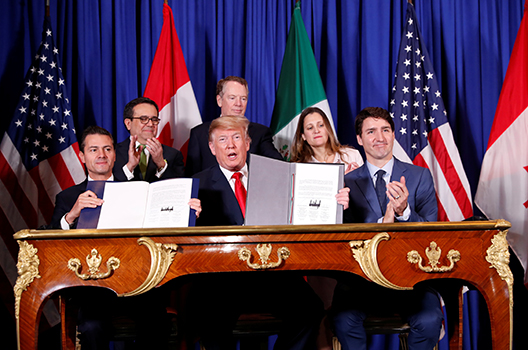 On November 30, the leaders of the United States, Canada, and Mexico signed the US-Mexico-Canada Trade Agreement (USMCA), modernizing the 1994 North American Free Trade Agreement (NAFTA) and “rebalancing” trade relations between the three countries, according to the US administration.  Before the new pact officially takes effect, however, the legislatures of all three countries need to approve the agreement.

The USMCA would preserve the massive trading and shared-production networks that support millions of jobs in the United States, Mexico, and Canada. Those networks support North America’s ability to compete effectively with China, Europe, and other economic powers. Approving USMCA this year would thus appear to be in the economic interest all three countries, providing certainty for the $1.3 trillion in three-way trade and for the many businesses, workers, and farmers that depend on the commerce and co-production that interlinks North America. Since USMCA will last at least sixteen years, its approval should provide certainty to encourage private sector investment in strengthening North America’s continental marketplace.

USMCA effectively updates NAFTA to reflect the changes in trade practices and in North America’s three economies since 1994. For example, it now covers Internet-based commerce and modernizes key areas such as trade in services, protection of intellectual property rights (IPR), and treatment of environmental and labor issues — a priority for US unions.  The biggest “rebalancing” changes initiated by US negotiators increase the amount of North American content required in vehicles and specify that 40-45 percent of that content must be produced by workers making at least $16 an hour. United States Trade Representative Robert Lighthizer and his team argue these new rules for the auto sector will add more jobs and investment in the United States. There are also significant US-driven changes in how investor-state disputes would be settled and in how the reviews and possible termination of the agreement would be handled.

US, Mexican, and Canadian business and farm organizations have welcomed the new agreement. Prospects for approval in Mexico and in Canada seem good, though Canada’s October elections and Prime Minister Justin Trudeau’s political problems may make that harder.

Before the agreement can move ahead, however, the three countries must find a solution to the tariffs the United States put on steel and aluminum imports from Canada and Mexico in 2018 for “national security” reasons. In response, those countries imposed equivalent tariffs on a range of US exports, spreading economic pain across all three countries. The governments of Mexico and Canada, as well as key Republican members of the US Congress, want this problem resolved before approving USMCA.

The US International Trade Commission must also first provide its assessment of USMCA’s economic impact for the United States. This assessment is expected in April.  The US administration will then propose implementation legislation (and guidelines) before Congress formally considers the agreement.

Supporters hope the US Congress will approve USMCA this summer or at least before the political window for action in the United States closes later in the year, due to the approaching 2020 presidential and congressional elections. The US administration and business and farm stakeholders have begun efforts to win congressional approval, but serious questions remain about whether the US House of Representatives will act this year.

Democrats and unions have raised concerns about the need for stronger enforcement of the agreement’s labor provisions regarding Mexico. These concerns are shared by US unions. In addition, some Democrats are worried that adjustments to USMCA provisions will raise drug prices for consumers and about the ability of the United States to enforce the environmental provisions in the agreement. Pundits have also argued that House Democrats may delay action until after the 2020 election.

To counter this, the US administration and private sector supporters of USMCA have already begun lobbying for the agreement. Lighthizer, for example, told the House Ways and Means Committee on February 27 that not approving USMCA would mean the US has “no trade program” and that it “can’t do trade deals,” sending damaging messages to China and others. He has begun a series of outreach meetings to win support for the agreement, including with US unions.

Regarding labor practices in Mexico, USTR and other supporters of the new agreement contend that the new labor chapter and the specific commitments by Mexico are a major advance and sufficient to address the concerns being raised. They argue that the United States will have good leverage and tools to assure compliance. They also highlight the fact that Mexico’s new government is committed to significant labor sector reforms. Mexican President Andrés Manuel López Obrador (AMLO) has long championed labor and union rights. AMLO has already initiated increases in the minimum wage and is supporting major labor reform legislation that is now before Mexico’s Congress of the Union, where his party has majorities in both houses. Passage in Mexico’s Congress of the labor reform is expected in April. The new legislation will likely address at least some of the concerns flagged by congressional Democrats and unions in the United States.  Mexico has also reached out to the AFL-CIO to discuss labor issues.

While congressional briefings and discussions are still in early stages, US President Donald J. Trump previously threatened to withdraw from NAFTA as a way to force congressional action. Withdrawing from NAFTA would be a very high-risk path, however. Congressional Democrats would likely bring a legal challenge against the president’s right to act unilaterally, arguing that NAFTA is a mixed executive-congressional agreement involving legislation the president cannot disregard. Various studies also project very serious costs of pulling out of NAFTA, with potential job losses estimated to range from 1.4 to 4 million for the United States, 1.5 to 10 million for Mexico, and 0.5 million to 1.2 million for Canada. It is hard to imagine that USMCA’s business and farm supporters would welcome actions with such dire potential consequences.

One good sign: the US public increasingly views trade in North America as positive. According to the Chicago Council on Global Affairs, for example, the number of people who view NAFTA and now USMCA as “good” for the US economy has grown significantly, rising from 53 percent in 2017 to 70 percent in early 2019. This is a firm basis for a rapid approval of USMCA.

Debates and discussions in the months ahead will be particularly consequential. Given the enormous economic benefits of approving USMCA, the US Congress, the Trump administration, and the nongovernmental stakeholders should make every effort to find ways to address concerns and come together around an approach that can be a win for all three countries and bolster the global competitiveness of all three economies.

Earl Anthony Wayne served as US ambassador to Mexico and Argentina as well as assistant secretary of State for Economic and Business Affairs, among other positions.  He is a nonresident senior fellow at the Atlantic Council and a public policy fellow and co-chair of the Mexico Institute Board at the Woodrow Wilson International Center for Scholars.