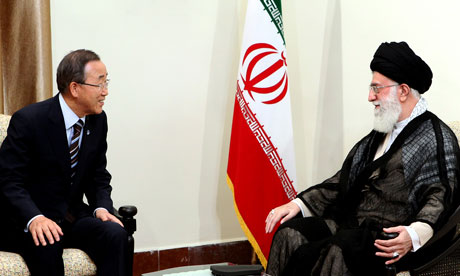 Two thirds of the U.N.’s countries recently signed a communique expressing support for Iran’s nuclear energy program and rejecting, what they termed, the United States’ unilateral sanctions against the Islamic Republic. A flashing red light that signals the American policy aimed at isolating Iran in order to curb its nuclear ambitions appears instead to have begun to isolate the United States.

The unequivocal support for Iran emerged at the Summit Meeting of the Non-Aligned Movement held in Tehran during the last week of August, 2012.

The Summit’s participants included many world leaders considered friendly to the United States: Manmohan Singh, the prime minister of India (who led a delegation of 250 to expand business and cultural ties with Iran); Afghanistan’s president Hamid Karzai; Qatar’s Emir Hamad bin Khalifa al Thani; senior officials from all the Persian Gulf countries; and Mohamed Morsi, the President of Egypt. Morsi’s attendance was the first time an Egyptian president has visited Iran since the Islamic Revolution.

India, by the way is a nuclear power that has not signed the nuclear Non-Proliferation Treaty and refuses to let its nuclear weapons facilities be inspected by the international community. No surprise, then, that it is an opponent of the West’s sanctions against Iran. China’s delegation to the conference was led by its Deputy Prime Minister who also came out in support of Iran’s right to nuclear technology. This alignment of Chinese and Indian national interests is an important marker given America’s strategic quest to build up India as a counterbalance to China.

Besides the communique opposing American-led sanctions, Iran scored another notable public relations victory at the Summit. Despite strong objections from the United States and Israel, the United Nations Secretary General Ban Ki-moon accepted the invitation to attend, saying,

And, lest I forget, The 120 countries at the Summit also elected Iran as Chair of the group for the next three years.

If you think the Non-Aligned Movement is simply a grouping of anti-American countries you would be wrong. Even though the countries gathered in Tehran supported Iran’s quest for a domestic nuclear capability, they refused to support Iran’s position in support of Syrian President Bashar al Assad. An independent streak that adds a lot of credibility to the stature of the organization whose members own 76 percent of world oil resources and 66 percent of the world’s gas.

The bottom line? If Iran believes its security and national priorities require that it develop a nuclear capability, then sooner or later that is what it will do. Furthermore, as a sovereign nation and signatory to the Nuclear Non-Proliferation Treaty, it has every right to do so. The West might not see it that way, but two-thirds of the U.N.’s countries do. It is time to recognize this reality and revise American policy to reflect it.

The alternative is for America to keep on the path it is on now and likely wind up in a war with Iran, either by itself or in partnership with Israel. A course of action that would be a foreign policy disaster: It would undermine America’s economy and security, shred what remains of its credibility in the Middle East and beyond, and make the position of Israel, one of America’s closest allies, even more insecure than it is now.

So it is time for Americans to debate whether the current policy of prohibiting Iran from developing a nuclear capability makes sense. If two-thirds of the U.N.’scountries do not think it does, there is a good chance that it does not.

Sarwar Kashmeri is a senior fellow with the Atlantic Council’s International Security Program. This piece was originally featured in The Huffington Post.