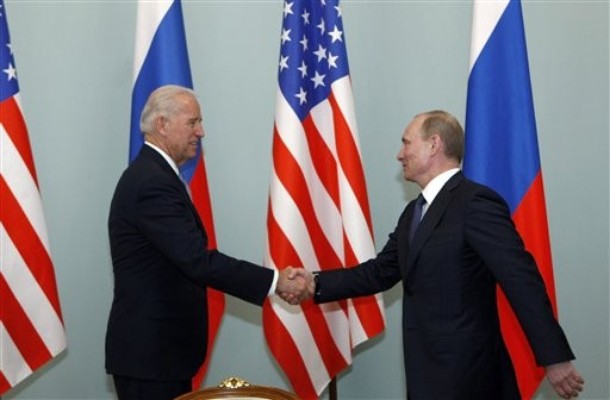 American Vice President Joseph Biden whisked through Moscow and Chisinau last week, promoting the Obama Administration’s “reset” of US-Russian relations. Ushering Russia into the World Trade Organization, the VP said, is an American priority. He ticked through the accomplishments attributed to reset, leveled some unvarnished criticisms at his Russian hosts and exited through Moldova, an itinerary that rankled in Moscow.  But there was nothing new—reset has devolved into an amalgam of inflated achievements and blunt but hollow words.

Biden coined the term “reset” at the 2009 Munich Security Conference. Two years later, he counts the benefits: the new START Treaty, an emergent deal on missile defense and cooperation on Iran and Afghanistan. “The United States and Russia,” Biden writes in a March 13 International Herald Tribune article, “can disagree and still work together.”

But the results of working together are anemic. Russia needed the new START Treaty more than America. And NATO-Russia discussions on missile defense have derailed any effective US counter to long-range ballistic missiles, toward which Iran continues to strive. Meanwhile, although some Iranians feel the sting of sanctions, these have not curbed the Islamic Republic’s geopolitical ambitions—which is fine with Moscow. If the Iranian nuclear weapons program was slowed, it was because someone injected the Stuxnet virus into its closed computer networks, not because Washington and Moscow now see eye-to-eye on the Persian Gulf.

As for Afghanistan, Moscow has dragged the NATO-led coalition through painstaking negotiations for the privilege of paying to transit Russia to fight a war that is in Russia’s interest.

On disagreements, only words. The VP frankly articulated his disagreements with Russia in a major speech at Moscow State University. The Russian “business and legal climate,” he said, impedes the country’s development. “Political modernization”—a euphemism for democratization—is needed.

Biden even cited the high profile cases of lawyer Sergei Magnitsky—who died in police custody after accusing the police of corruption—and Mikhail Khordorkovsky—who languishes in jail after a trial that the Washington Post labeled “a blatant farce.”

In Chisinau, Biden delivered a speech reminiscent of then US President George W. Bush’s 2005 Tbilisi address. “Achieving democracy is not easy,” Biden told Moldovans, “but you also know it is worth the struggle. As you continue this journey, I promise you America will be your partner.”

On Transnistria, a bit of Moldova occupied by Russia despite its 1999 agreement to withdraw, the VP continued, America supports “a settlement that preserves Moldova’s sovereignty and territorial integrity within your internationally recognized borders.” Again, these words are similar to those that Washington emits about Georgia.

Biden’s words annoyed many Russians and even evoked a flurry of nationalistic articles. But the Moscow political establishment has learned to roll its eyes and endure these American bouts of frankness—agreeing to disagree under the reset policy is near costless. Regrettably, reset remains a flawed policy based upon flawed premises.

“When we came into office two years ago,” Biden writes, “our relationship with Russia had reached a low point. The war between Russia and Georgia played a role in that decline, but even before that conflict erupted in August 2008, a dangerous drift was underway…Ironically, this came at a time when American and Russian security interests, as well as economic interests, were more closely aligned than ever. That’s why President Obama made it a priority to reset our relationship with Russia.”

In reality, the US and Russia did not drift apart due to Bush Administration inattention or diplomatic malpractice. They were pulled apart because then President, now Prime Minister Vladimir Putin defined Russian security interests that were divergent from American interests, culminating in Russia’s willful attack upon Georgia.

Reset ignores this underlying reality, resting instead on the false premise that diplomacy properly applied will set things right.  This leads to a diplomatic dual track—moving ahead in areas of agreement while agreeing to disagree in tough areas. At the very outset of an administration, this could be useful. But sooner rather than later, the tough issues must be confronted because, in the real world, things are connected. Russia’s bid to join the WTO is an example.

“The next frontier of [the US-Russian] relationship,” Biden writes, will be building stronger ties of trade and commerce,” hence America’s support for Russia to join the WTO. “But even if they do join WTO,” Biden continues, “Russia’s business and legal climate and backsliding on democracy will present serious obstacles.” Wait a minute! If Biden is correct, then these US concerns should not be confined to a stage at Moscow State University or to newspaper opinion pages. Otherwise, one track leads to whatever Moscow wants and the other track dead-ends in sterile restatement of disagreements.

Russian occupation of Georgian territories is another real world obstacle to its membership in the WTO. The matter of who will control the customs facilities at the internationally recognized borders between Russia and Georgia cannot be pushed beneath Russian tank treads, if a rule-based trading system among states party has any meaning. Washington simply cannot have it both ways.

Everyone wants good relations with Russia, but two years is too long to press down on the reset button—we risk a system crash. Reset—fahgettaboudit; we need a new hard drive, a new, realistic policy approach.