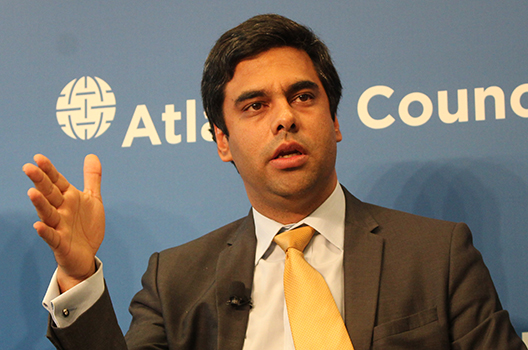 Representatives of Venezuela’s interim government, at the Atlantic Council in Washington on March 14, unveiled their plan for the reconstruction of their country, which has for months been mired in a worsening humanitarian, political, and economic crisis.

Daniel Sierra, a public policy adviser for Venezuela’s interim government, said that the plan—Plan País—will focus on resolving five key challenges: the humanitarian crisis, rebuilding the economy, regaining security and the rule of law, restoring public services and utilities, and strengthening the institutional capacity of the state after years of political purges by the regimes of Nicolás Maduro and his predecessor Hugo Chavez.

Jason Marczak, director of the Atlantic Council’s Adrienne Arsht Latin America Center, described the new reconstruction plan as “the most promising opportunity yet to steer Venezuela out of its crisis and into a new path for prosperity.”

He maintained that while “it will be up to the interim government to help restructure Venezuela’s economy as well as the public sector,” it will be up to “the international community to support Venezuela in this next step and here multilateral cooperation will be essential to Plan País’ successful implementation.”

The situation in Venezuela is unlike anything “we have ever seen [before] in Latin America,” said Inter-American Development Bank (IDB) President Luis Alberto Moreno.

Moreno said that in order to begin reconstructing the country, interim government officials, international multilateral financial institutions, and the private sector need to mobilize to address the humanitarian needs of Venezuelan citizens and be ready with financing for the country’s critical energy sector to jumpstart the economy.

Venezuela’s economy has collapsed on Maduro’s watch. Inflation has reached 1.3 million percent, millions of Venezuelans have slipped into poverty, and more than 3 million are estimated to have left the country. On March 14, a more than seven-day-long blackout finally ended but not before it exacerbated an already dire food supply and sanitation situation throughout the country.

The political crisis has also sharpened over the past few months.

On January 10, Maduro was inaugurated to a second term as president of Venezuela following an election that was seen as illegitimate by most international observers and Venezuelan opposition leaders.

The United States joined dozens of other countries in recognizing Guaidó as the interim president of Venezuela. Russia, China, and Turkey are among the countries that continue to support Maduro.

For Ángel Alvarado, a representative in the National Assembly for the state of Miranda, the humanitarian crisis is the most pressing challenge. He described having to set up a food distribution center in his district, at first to feed dozens of starving children, then to help thousands as the situation has grown dire. Maduro’s mismanagement of the economy and insistence on political loyalty have meant that Venezuelans “have to rely on a political party to be able to eat,” according to Alvarado.

Moreno agreed that meeting the humanitarian needs of Venezuelan citizens should be the first priority of the international community. He explained that IDB surveys suggest that in Venezuela now “the level of poverty is 94 percent,” while poor sanitation and lack of clean drinking water is causing outbreaks of cholera and malaria in parts of the country.

Moreno applauded the international community’s efforts to send aid into Venezuela—plans that have been largely thwarted by the Maduro regime—but argued that international donors and financiers will need to consider “unconditional cash transfers” to Venezuelans in order to truly tackle the crisis and lay the foundation for an economic recovery.

In order to begin to jumpstart the Venezuelan economy “the country is going to need mass resources from multilateral institutions,” Sierra explained.

Alejandro Grisanti, the founder and chief executive officer of Ecoanalitica, explained that more than $70 billion could now be needed to stabilize the financial situation in Venezuela. “This is how costly the crisis has been,” he said, adding that “everyday this crisis continues, the more money will be needed… the numbers change the more this crisis goes on.”

The sums are so large that global multilateral organizations, such as the IDB, the International Monetary Fund, and the World Bank will not be able to provide all the support needed on their own.

Nancy Rivera, managing director of the Overseas Private Investment Corporation, explained that private sector investment is ready and willing to assist in Venezuela, as long as a new government provides the transparency and consistency of regulation that gains “the trust of the private sector.”

Moreno agreed, arguing that “at the end, the engine [for growth] in Venezuela has to be the private sector.” He noted that currently private investment makes up less than 1 percent of Venezuela’s gross domestic product.

Despite the current state of the economy, Rivera thinks the private sector will be willing to jump in as “Venezuela has an enormous advantage because the priority areas… of growth are going to be the oil sector and the energy sector in general.”

Venezuela has some of the largest oil reserves in the world, but mismanagement by Maduro and Chavez has caused production to drop to lows not seen since World War Two, Moreno explained.

Sierra said Plan País will call for a new strategy which shifts the emphasis from “protecting oil prices” by limiting production to “maximizing output.” Maximizing the amount of oil produced, Sierra maintained, can help spread the benefits of the resources more broadly and provide the short-term cash needed to pull Venezuela out of the hole.

Venezuela can no longer “keep the oil underground and keep poverty above ground,” he argued.

The plan will also include the creation of a “independent technical agency” to regulate the oil industry and the state oil company (PdVSA), although Vecchio cautioned that this did not mean the new government would “turn PdVSA into a private company.”

Although oil production and the energy sector will be a short-term focus for restarting growth, Alvarado cautioned that the interim government cannot place all its hopes on that sector. Even at the height of the oil boom, Venezuela continually struggled to create enough jobs for its citizens, he said.

A permanent economic recovery, he added, is “only going the be possible if we develop other sectors” with the help of international financers.

Image: Ángel Alvarado, a representative in the Venezuelan National Assembly for the state of Miranda, speaks at the Atlantic Council on March 14, 2019.