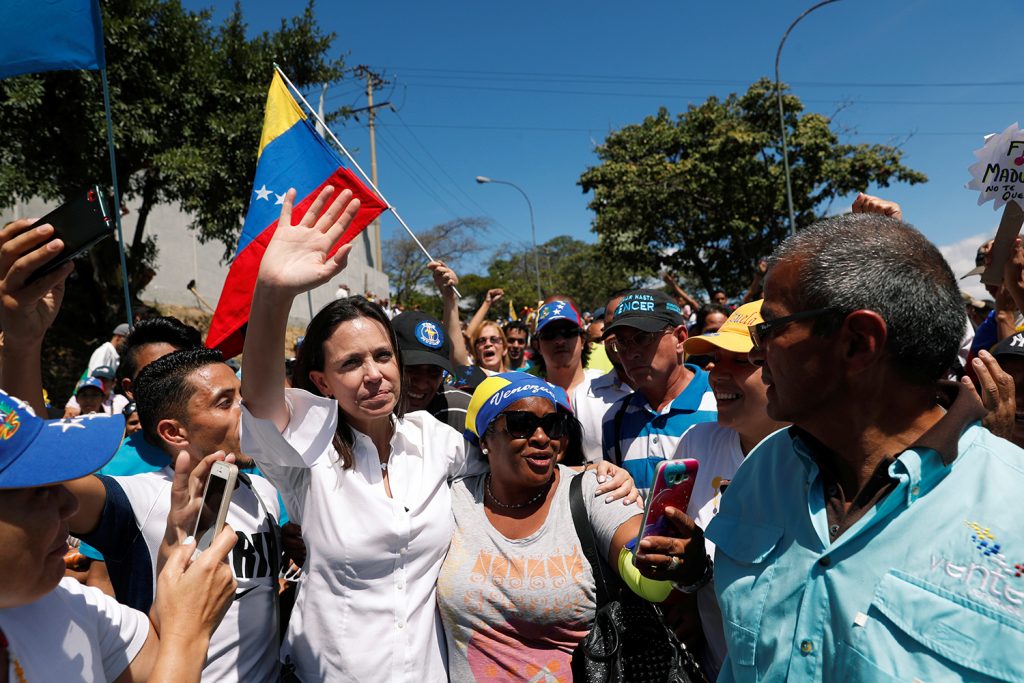 Venezuela’s vibrant and politically engaged women’s movement has played an increasingly visible role in political organizing, particularly as the country undergoes a political, economic, and humanitarian crisis. Women in Venezuela, however, still account for only one third of participation in the National Assembly, remain absent from major leadership positions in democratic political decision-making, and are systematically victims of human rights violations throughout the country. In order for Venezuela to transition to a more democratic, inclusive, and peaceful society, the interim government must strengthen women’s political participation and decision-making power.

Set to become the largest migration and refugee crisis in the world by the end of the year, the Venezuelan exodus stems from a lack of freedom, human rights, economic opportunities, and access to food and healthcare—resulting from years of corruption and mismanagement at the hands of a kleptocratic regime.

The crisis has worsened the many barriers Venezuelan women face to education, the labor force, and sexual and reproductive health. Venezuelan women carry the burden of household tasks and child rearing, spending on average ten hours a day queuing for food. Moreover, women in Venezuela are subject to sexual and gender-based violence (SGBV)—particularly relatives of pro-democracy actors, as well as women in detention centers.

Despite a decade of human rights violations and extensive repression of political and civil liberties, Venezuelan women are on the frontlines in the fight to restore democracy.

In the 2015 legislative elections, fifty women were elected to the National Assembly—up from twenty-two in the 2010-2015 period—representing 33 percent of all parliamentary seats. However, nine of those fifty-six representatives have been forced into exile.

Outside the National Assembly, Venezuelan women have led peaceful protests demanding access to basic goods and services, participated in anti-regime protests, and constitute 72 percent of the membership of local community councils.

National Assembly representatives Marialbert Barrios and Delsa Solózano, as well as politician María Corina Machado, report women are leading demonstrations, town halls, and citizen assemblies across the country. Barrios, Solózano, and Machado have also highlighted that women represent the majority of base support for political parties and are often given organizing roles within the parties.

Nonetheless, all three leaders expressed frustration at the lack of female representation within senior leadership, given the extensive contribution of women to their parties.

While gender equality in the National Assembly has grown in recent years, the number of women elected to the only democratic institution in the country currently fails to meet the targets outlined by UN Sustainable Development Goal 5 (indicator 5.5.1), which calls for equal gender representation in national parliaments. And although women are playing central roles in mobilization efforts for an end to the crisis, the number of women in leadership positions within political parties does not accurately reflect their level of contribution to the parties. Within the interim government, efforts to restore democracy would benefit from women’s participation in all meetings, consultations, and agreements, as well as equal gender representation in cabinet positions.

A study by the International Peace Institute on 182 signed peace agreements found that these agreements are 35 percent more likely to last for fifteen years or more when women participate in the creation of the agreement. Although the evidence overwhelmingly shows that women’s participation in conflict prevention and resolution improves outcomes, between 1992 and 2018 women made up only 3 percent of mediators, 4 percent of signatories, and 13 percent of negotiators in peace processes.

The interim government led by President Juan Guaidó can enhance Venezuela’s democratization process by ensuring women are appointed to leadership positions in governance structures and guarantee that laws enacted to enforce greater gender representation in the National Assembly are actually obeyed.

In addition, democratic efforts for a political resolution to the crisis must ensure women’s participation in meetings and stakeholder engagements. Key agreements, documents, and charters related to transitional policy must reflect the inputs of women and women’s groups.

The inclusion of women in the Venezuelan transition will strengthen and enhance a more democratic and inclusive political decision-making process and improve the likelihood of achieving a sustainable resolution to the political crisis and lasting peace in Venezuela.