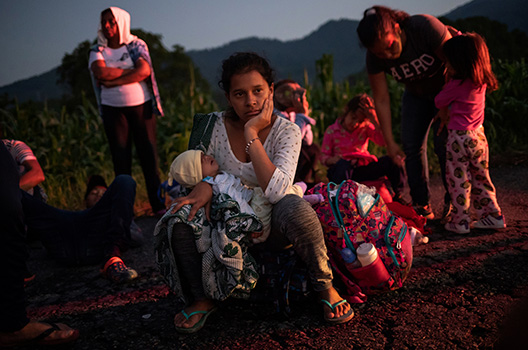 US President Donald J. Trump has described the caravan of Central American migrants making its way north through Mexico as an “invasion” by “many gang members and some very bad people.” Former Immigration and Customs Enforcement (ICE) agent David Ward claimed—without a shred of evidence—that the group comes bearing smallpox, leprosy, and tuberculosis.

There is one thing these people do have: fear.

Earlier this summer, the American Civil Liberties Union filed a suit against then US Attorney General Jeff Sessions for unlawfully elevating the credible fear threshold for asylum requests and eliminating most claims on the basis of gender- and cartel-driven violence. The lawsuit emphasizes an often-overlooked reality: there is a direct correlation between gender-based violence and forced migration.

Sexual and gender-based violence is a primary factor forcing women and girls to migrate from the three Northern Triangle countries: Honduras, El Salvador, and Guatemala. A 2017 study on migration from these countries conducted by the University of Washington found that the increase of violence between 2011 and 2016 coincided with a doubling of total respondents listing “fleeing violence” as their main reason for migration.

To effectively address migration from the Northern Triangle, states must better understand this relationship and invest in long-term solutions. These solutions should be aimed at strengthening institutional capacity, fostering a culture of equality and accountability, and increasing access to educational and legal resources.

Femicide—the targeted killing of a woman, particularly by a man, due to her gender—plagues much of Latin America and the Caribbean. A report published by Small Arms Survey in 2016 found that fourteen of the twenty-five countries with the highest rates of femicide in the world are in that region.

Femicide in Northern Triangle countries particularly stands out for its severity. According to the United Nations, Honduras –which is about the size of Ohio – has the highest femicide rate in the world. Most cases are never investigated. Despite these countries’ comparatively small population (just 5 percent of the region’s total population), together, the three countries rank third in terms of the largest total number of femicides, with 1,804 deaths in 2016 alone. The Northern Triangle countries rank ahead of Brazil, the world’s fifth-largest country, and currently the fifth highest ranking in the world for total number of femicides.

Although these figures are frequently attributed to general or domestic violence and organized crime, femicide is perpetuated by deep-rooted social and systematic factors: a widespread machismo culture that favors men over women; low degrees of institutional capacity due to corruption; and high degrees of impunity—an exemption from punishment and the failure for perpetrators to be brought to justice.

Low degrees of women’s well-being and the persistence of violence within the region will continue to cause regional destabilization and fuel forced migration. According to the Women Peace and Security Index, El Salvador, Guatemala, and Honduras are second-tier performers in terms of women’s well-being, placing 77th, 102nd, and 83rd among 152 countries, respectively. Negative indicators of social well-being, including high degrees of impunity, perceived insecurity, and low degrees of institutional capacity in the Northern Triangle, reduce the viability of justice measures and leave particularly vulnerable portions of the population—women, children, and the LGBTQI community—with few options for protection beyond migration.

Experiences of violence within the region differ by gender. Although men are more likely to experience violence in the context of armed conflict or organized crime, women are more likely to experience physical domestic violence or sexual violence, according to the Pan American Health Organization. Gangs and drug cartels map onto this scheme of gendered forms of violence, often relying on the use of sexual and gender-based violence to maintain fear and control. Consequently, when controlling for gender, women in the study were more likely to cite “fleeing violence” than male responders.

According to current projections, femicide in Latin America is on the rise, increasing from one death every thirty hours in 2016 to one death every eighteen hours in 2017. More needs to be done by both regional and international actors to counter this growing trend and to protect women’s rights.

Some states have begun to implement measures to do so. For example, Guatemala’s former attorney general, Thelma Aldana, oversaw the creation of the Special Prosecutor’s Office for Femicide, a specialized court designed to increase the efficacy of investigations and prosecutions. Additionally, some states have worked with the United Nations to adopt the Latin American Model Protocol, a set of procedures designed for use by investigators and prosecutors in the region to ensure the totality of investigations.

The success of such programs, however, is dependent on the use of an intersectional framework that includes diverse voices from all segments of society and ensures equal access to resources. It is vital that regional actors identify all vulnerable portions of society, especially indigenous groups, and bring these groups into the conversation. Using this information, states can better allocate educational and legal resources to ensure equal access to protection.

Existing evidence demonstrates that gender equality and inclusion help build more prosperous and peaceful states. For this reason, long-term commitments are necessary from both regional and international actors. Any policy that overlooks this relationship is complicit in perpetuating femicide, hindering development, and destabilizing the region.

Maria Fernanda Perez Arguello is an associate director with the Atlantic Council’s Adrienne Arsht Latin America Center, where she focuses on, among other things, Central America. Follow her on Twitter @mfperezcr.

Image: A migrant woman rests roadside with her child while traveling with a caravan of thousands from Central America en route to the United States as they make their way to Mapastepec from Huixtla, Mexico October 24, 2018. (REUTERS/Adrees Latif)