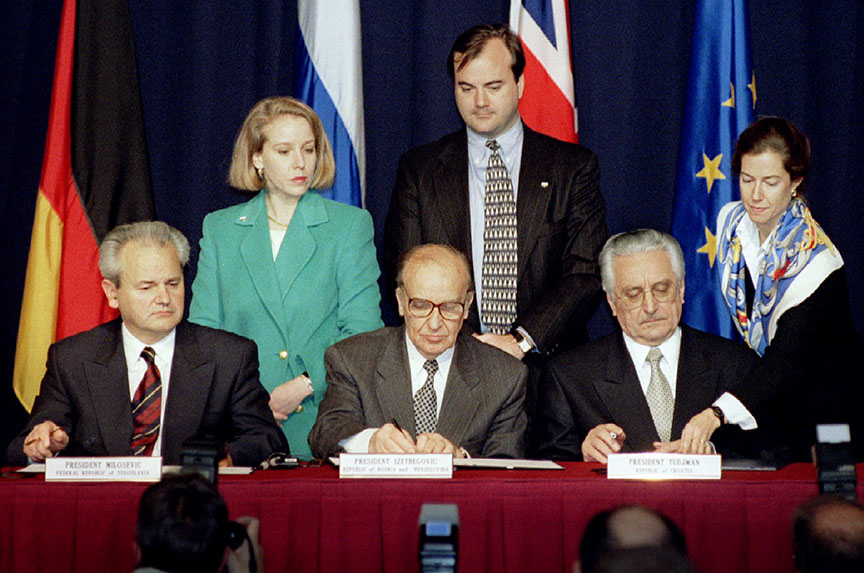 From left: Serbian President Slobodan Milošević, President Alija Izetbegović of Bosnia-Herzegovina, and Croatian President Franjo Tuđman signed the Dayton Accords peace agreement at the Hope Hotel at Wright-Patterson Air Force Base in this November 21, 1995, file photo. The Dayton Accords ended the war in Bosnia and outlined a General Framework Agreement for Peace in Bosnia and Herzegovina. (Reuters/Eric Miller)

The United States’ engagement is needed in many trouble spots around the world, but in few places is the need as urgent as in Bosnia and Herzegovina.

Many Americans will recall vivid TV images from the 1990s of massacres in Sarajevo, the ferocious siege of Bihac, and the genocide at Srebrenica. Since those days of unspeakable horror, a fragile but thankfully enduring peace has held in Bosnia and Herzegovina (BiH).
The war ended with the Dayton Accords in 1995. BiH now needs a bold new vision to reengage its three constituent communities—Bosniaks, Serbs, and Croats—given the very real risk of disintegration and possible spillover effects for the region in particular and for Europe more broadly. The people and political leaders of BiH also need the United States’ non-partisan support and commitment just as much today as they did leading up to the Dayton Accords.

The breaking point is fast approaching. If the parliament of BiH does not vote by May to reform its electoral laws in compliance with a Constitutional Court ruling, then the results from the general elections slated for this October will be unenforceable; a government may be formed, but it will not be able to function, democracy will fail, and inter-community tensions will be heightened.

The United States in particular and the international community in general should not be reluctant to formally revisit the Dayton agreement that was forged so painstakingly. As the International Crisis Group’s report from July 2014 made clear, the US-led policy for Bosnia of the past twenty years has largely come up short. And, indeed, the governance systems in BiH established by Dayton and altered many times since, as ably documented by the International Crisis Group and BiH Constitutional Court Justice Mato Tadic, are proving inadequate.

A recent judgment by the constitutional court in the case of Bozo Ljubić encapsulates the weakness and political paralysis facing BiH. Ljubic, the president of the General Council of the Croatian National Congress of Bosnia and Herzegovina, argued that part of the country’s electoral legislation was unconstitutional because it effectively allowed one of BiH’s three communities—Bosniaks—to elect the representatives of another group, in this case, Croats. The court said that this violated constitutional guarantees on the equality and legitimate representation of the three constituent communities. It ruled that the country’s smallest community, with the Croat majority, has been disenfranchised by past electoral law changes and, by extension, that its institutional status needs to be restored on par with the other two communities.

The court waited for BiH’s politicians to agree to a new law, but after fourteen months nothing has happened. If legislators cannot agree to a new law by May, the October general elections will be doomed. This will send ripples through BiH’s governance structures making today’s political standoff look tame by comparison.

An invalid election would also threaten the entire region, where inter-community tensions continue to fester and economies remain crippled by corruption, outward migration, and special interests. The threat would perhaps be most acute in Croatia, a frontier EU member, given its long border with BiH. This could lead to trade disruptions, a tourism tailspin, and displacement of people.

The United States has the authority, if it acts as a neutral arbiter, to bring the Bosniak politicians to the negotiating table to implement the court’s judgment and prevent the country’s slide into chaos. US policymakers need to understand that a strong US role here and now is also in the United States’ own self-interest.

Russia is meddling in the Balkans. It is fueling separatist sentiment in the Serb-majority community that will grow exponentially if the election in BiH is invalid. Turkey’s support for BiH’s Muslim Bosniak majority emboldens Bosniak leaders to resist any initiatives that do not align with their sectarian interests, especially electoral reform proposals put forward by Croats.

US politicians should not believe that a lack of open warfare in BiH equates to stability. They can no longer afford to think that all is well in BiH because CNN isn’t broadcasting reports about people in the country killing each other. Dayton was not the end of strife in BiH, and balanced and fair American engagement in this troubled country is needed to ensure it is not overwhelmed by strife again.

US President Donald J. Trump’s administration must seize the moment to review the US role in BiH lest the situation there deteriorates to the detriment of BIH’s citizens, neighbors, and indeed the United States and its legacy of the Dayton Peace Accords.

The European Parliament has appealed for a new vision for BiH, including in its latest resolution in early 2017, which we call federalization: the middle path between the two extremes now prevailing in the country—centralization and separatism. This vision in practice means equality for three civic communities in a reunified state. Our hope is that the United States will join us and resume its earlier transatlantic cooperation in the Western Balkans and BiH.

Zeljana Zovko is a member of the European Parliament, European Peoples Party/Croatian Democratic Union. Follow her on Twitter @ZovkoEU.