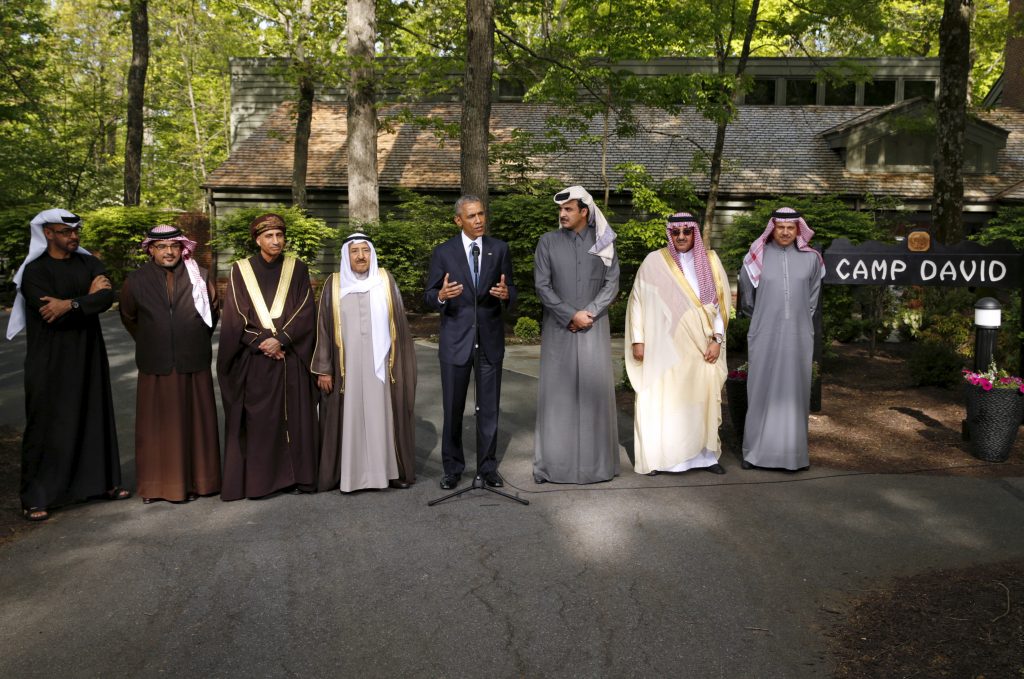 As US, European, and Iranian negotiators race to conclude a deal that would limit Iran’s nuclear program in exchange for an end to punishing economic sanctions, the Atlantic Council’s Bilal Y. Saab says that alone won’t bring security to the region—nor will it satisfy Israel or Iran’s loudest critics on Capitol Hill.

On June 30, with only hours to spare, officials in Vienna extended their deadline for talks by another week when it became clear that all sides needed more time. But, as Saab, a Senior Fellow at the Atlantic Council’s Brent Scowcroft Center on International Security, explained, “the hard work does not stop here, and in fact, it may have just begun.”

On July 7—the same day as the new deadline, the Atlantic Council will host a panel in Washington during which Saab will present his thirty-page report, titled The New Containment: Changing America’s Approach to Middle East Security.

In it, he argues that “to protect the deal and take full advantage of its potential benefits—which include the drastic reduction of the risk of nuclear weapons proliferating in the region—the United States needs a comprehensive strategy for regional security in the Middle East.”

As negotiators appear to be inching toward an agreement, Saab told the New Atlanticist that he’s confident a deal of sorts can and will be reached.

“I think there’s a good chance we will see a nuclear deal with Iran that would effectively cap Tehran’s nuclear program for at least the next ten or fifteen years. However, that outcome will neither eliminate its nuclear enrichment capabilities nor pacify the region,” said Saab. “The Iranian nuclear program—as strategically significant as it is—is only one piece of the Middle East security puzzle.”

With the Islamic State in Iraq and al-Sham (ISIS) now controlling large swaths of Iraq and Syria—and masterminding terrorist attacks in Libya, Tunisia, Saudi Arabia, Kuwait, and even Egypt’s Sinai Peninsula, only miles from the Israeli border—terror threat levels throughout the region are now at their highest in years.

In order for the United States to “put out the flames in that part of the world,” so to speak, Saab told us four key assumptions must be made:

“What follows from these four key assumptions is a new containment approach for the Middle East that specifically seeks to involve regional stakeholders in a new regional security architecture,” said Saab. “The ultimate purpose of this new containment strategy is to enable local actors to undergo this period of change with the least amount of chaos and instability.”

Saab spoke with the New Atlanticist’s Larry Luxner. Here are excerpts from our interview:

Q: How important is it that all parties involved conclude a nuclear accord with Iran by the announced deadline?

Saab: This deadline gives more ammunition to those opposing the deal to keep poking at it. I’m talking about folks in Congress, and Republicans. The more this drags on, the more time it gives them to highlight the flaws of this deal.

Q: So is the deal we’re about to sign really a good one, given those flaws?

Saab: I have yet to hear a single argument about what is a good deal in the eyes of Israel and those who oppose it. For them, a good deal is one that completely eliminates Iran’s nuclear enrichment capabilities. In the real world, that’s unrealistic. You can’t bomb away nuclear knowledge without incurring intolerable costs. Their nuclear program is extremely well-dispersed and complex, and it’s almost physically impossible to destroy it. It would rise from the ashes and start again. Like I said, it’s too late for that, given the extent of Iran’s nuclear infrastructure. The only way to do this practically is to go for regime change.

Q: From the US perspective, what’s the downside to a proposed accord with Iran?

Saab: Nobody said this was going to be a perfect deal. But it sends a message to those who have been abiding by the rules, namely the UAE and the Gulf states. Now, all of a sudden, you allow the Iranians to enrich uranium on their own soil. The Saudis have been threatening for quite some time to come up with their own program. That might be hot air, but there’s a risk of proliferation of nuclear materials.

It’s not just the fact that the Iranians have been allowed to enrich at lower levels. It’s that they’ve been given a free pass by this administration to have a dominating presence in the region that is quite destabilizing. Let’s be honest. The Gulf states will engage in an arms race. That will increase the risk of regional war, and that’s the significant risk of this deal: there has not been a serious treatment of the other security challenges that Iran creates in the region. Their network of surrogates and non-state actors are all over the place.

Q: So what can the United States do to stem Iran’s rising influence in the Arab world?

Saab: There’s nothing the US can do to roll this back. I think it’s too late. To limit that kind of influence, you’re going to have to invest much more in the asymmetric means to fight it, and not rely on heavy hardware and more capacity in the Gulf. Those assets—supersonic fighters, aircraft carriers, missile defense systems—all those platforms are geared toward overt war. The things that can really detect Iranian interference are border security, high-altitude reconnaissance systems and international cooperation.

Q: Iran threatens not only Israel but also several Gulf states, including Saudi Arabia. Do you expect that common threat to bring these traditional enemies closer together?

Saab: There’s been a trend of increasing tacit cooperation between Israelis and a set of other Gulf countries, specifically the UAE. It’s all behind closed doors and under the radar, but it has now reached a certain crescendo that frankly its practical significance has been exaggerated. The societies of these Gulf countries are still vehemently anti-Israeli. So getting cozy with the Israeli government without the blessing of the population is a recipe for rebellion—and ammunition for radicalization and recruitment to ISIS.