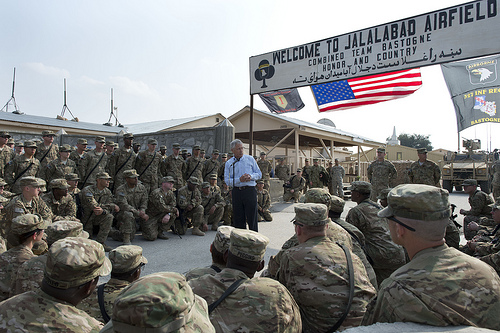 Last week, James Joyner posed the question, “was Afghanistan worth it?” He offered a compelling strategy-based assessment concluding “while the goal may be just, the mission still isn’t defined and the objectives are far from clear.” If this was not enough, Karzai’s recent charge that the Taliban are in service of the United States challenges the most die-hard advocates of coalition efforts there.

Without a doubt, Karzai’s statement is disappointing and may be an odd ploy to court the new ISAF commander and US secretary of defense, yet it may be the miscalculation policymakers need to refresh their thinking about Afghanistan. While NATO forces have about 650 days to go until fully transitioning combat responsibility to Afghan forces, public opinion suggests that ISAF countries are acting outside their democratic interests. In the United States, for example, a majority think the war in Afghanistan is not worth it. As lawmakers look at US defense cuts, they may choose to support American forces rather than Afghan ones.

To see what can be learned from the wars, the current issue of Foreign Policy magazine offers a “special report on twelve years of getting it wrong.” Moderated by Tom Ricks, the magazine convened a roundtable of former military leaders, policymakers, and journalists to conduct an after action review of the Iraq and Afghan wars.

The issue joins the various government studies to document failures and lessons to include the SIGAR reports, semi-annual progress reports, and the Joint Staff study “Enduring Lessons from the Past Decade of Operations.” The latter offers eleven strategic themes; one of which is the Pentagon’s deprecating conclusion, there was a “failure to adequately plan and resource strategic and operational transitions [that] endangered accomplishment of the overall mission.”

Channeling this finding, Foreign Policy editor Susan Glaser observes: “In September 2001, if you had told us in 2013 we are going to be in Afghanistan with 65,000 American troops and debating what we accomplished there…my strong sense is that there would have been an overwhelming view in the US military—and among the US people more broadly—that this was an unacceptable outcome.”

Hindsight is 20/20, but the conflict’s length and intensity are not the same—more Americans died on 9/11 than have been killed in Afghanistan over the last twelve years. While the ISAF mission has been lengthy, the NATO mission is Kosovo is slightly older.

The prolonged international presence has raised living standards, increased school attendance, and given Afghanistan an opportunity to develop. However, there has been too little action by the Afghan government to confront insurgent sanctuaries, combat corruption, or control heroin exports. The latest insider attack reminds us coalition lives are at stake.

With this in mind, Joyner seems to be right that the length of the conflict and frustrations with it are a function of shifting objectives. Both the Bush and Obama administrations shifted the goals from disabling al-Qaeda to enabling a sovereign state. Given the international track record of state-building activities, it is the latter objective that deserves more attention. Unfortunately, the Foreign Policy roundtable primarily offers a military view of Afghanistan—no American foreign service or development officers were included in the discussions.

Washington Post reporter Rajiv Chandrasekaran and former undersecretary of defense for policy Michele Flournoy, who participated in the roundtable, raise some of these issues. Yet, more discussion is necessary to understand why after twelve years of trying to operationalize the civilian government there has been so little progress. This is important since Ricks concludes “the policymaking apparatus of the US government simply did not work for long periods of time and if it had, the wars might have proceeded far differently.” As we reflect on more than a decade’s experience in combat, this should guide thinking about the wars and the next roundtable.

Derek S. Reveron, an Atlantic Council contributing editor, is a professor of National Security Affairs and the EMC Informationist Chair at the U.S. Naval War College in Newport, Rhode Island. The views here are his own and do not necessarily reflect US government policy.