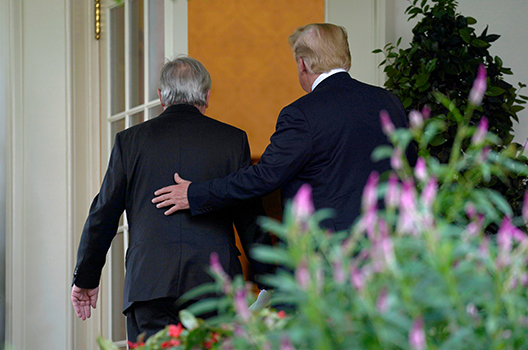 Coming up on the anniversary of the July 2018 “trade truce” between European Commission President Jean-Claude Juncker and US President Donald J. Trump, little progress has been made in trade negotiations between the United States and the European Union. This article is the second in a series that will take stock of the opportunities in and challenges to the deepest trading relationship in the world and focuses on two current high-profile disputes.

US frustrations with the functioning and role of the World Trade Organization (WTO) figure prominently in the background of discussions with key trading partners, including the European Union (EU).  The United States and a number of its allies have for some time flagged areas of the WTO process they consider problematic. These include the self-designation as developing countries by China and others, which allows them to commit to a narrower range of WTO obligations; the notification procedures under which member countries are supposed to (but often do not) disclose information about domestic subsidies and other economic policies affecting trade; and the organization’s dispute resolution system.

The Trump administration has decided to significantly escalate tensions on WTO governance issues given these longer standing concerns, as well as given high-profile cases in front of the WTO that directly affect the EU-US trade relationship. In a recent decision that could have implications for the United States, the WTO concluded that it has jurisdiction to review trade measures taken by a member claiming national security exceptions. The WTO is expected to rule in the coming months whether the United States meets the claimed national security conditions to justify imposing steel and aluminum tariffs on the EU and others, setting up a potential high-profile clash with the United States and opening a rift between Washington and its key allies.

The United States could well decide to ignore an adverse ruling, in addition to continuing to block appointments to the WTO’s Appellate Body, effectually rendering it unable to make decisions after December 10 when its membership (meant to consist of seven judges) will no longer meet the quorum of three judges. The EU, along with others such as Canada, China, and Japan, have made proposals to further reforms that have not to-date been met with serious US engagement.

Combined with the United States’ high-profile frustrations and recent focus on bilateral dispute resolution outside of the WTO system during its trade talks with China, the EU and others are reportedly scrambling for ways to preserve the essential workings of the WTO dispute resolution system in the assumption the stalemate will last.

Besides the threat of auto tariffs, the EU and the United States have other disagreements that could soon surface. Most importantly, nearly fifteen-year-long legal disputes over alleged government support to Airbus (by the EU and member states) and Boeing (by the United States and Washington state ) are intensifying with recent rulings at the WTO giving both sides reason for further escalation.

The WTO ruled late March that the United States had failed to halt tax breaks granted to Boeing, and then subsequently ruled in May that the EU had provided subsidies to Airbus afoul of WTO rules. The rulings open the prospect of punitive retaliatory tariffs and both the United States and the EU have since released lists of products that might potentially be subject to such tariffs, equivalent to $11 billion and €20 billion of current trade, respectively.

The final amounts of any such retaliatory tariffs approved by the WTO will likely be much lower as the estimate of the actual damage done to the competing company in terms of aircraft sales is subject to further legal discussion at the WTO, which would also have to consider earlier mitigation efforts, for example, by the EU and Airbus.

Yet the high profile of the conflict, the importance of both companies, and the tense broader environment characterized by a low level of constructive engagement on trade topics between the United States and the EU may well get this dispute ensnared in a broader tit-for-tat.

Bart Oosterveld is director of the Atlantic Council’s Global Business and Economics program and C. Boyden Gray fellow on global finance and growth.

Image: US President Donald Trump and President of the European Commission Jean-Claude Juncker walk together after speaking about trade relations in the Rose Garden of the White House in Washington, US, July 25, 2018. (REUTERS/Joshua Roberts)