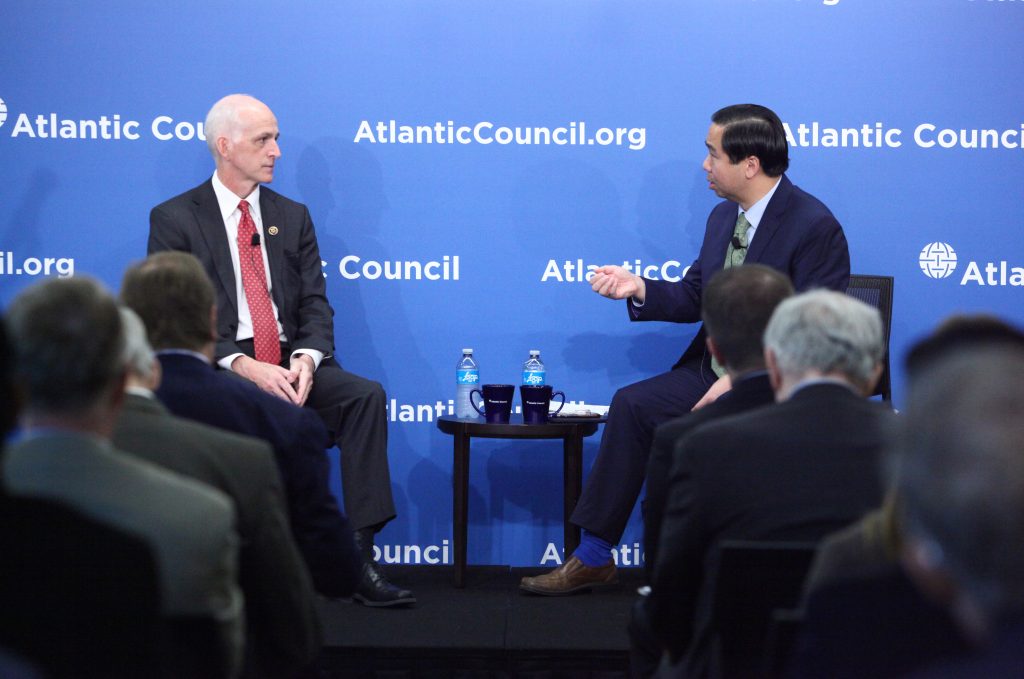 The Pentagon needs a long-term budget that is free of caps if it is to address important global threats, including from Islamist militants, Russia, and China, a senior Democratic lawmaker said on Oct. 21.

The White House wants caps on both defense and non-defense spending to be lifted, and has made clear that US President Barack Obama will veto the defense policy bill as it exists today.

Obama will veto the National Defense Authorization Act (NDAA) because of its reliance on the war fund—Overseas Contingency Operations (OCO). Republicans had tried to meet the President’s budget request by using the OCO, which is exempt from sequestration budget caps. Smith, who described the OCO approach as a “gimmick,” said the reliance on this “undependable” source of funding is the reason why Obama will veto the defense policy bill.

“If we don’t get rid of the budget caps the Pentagon is going to be facing a level of uncertainty that is going to continue to make it very difficult to budget,” Smith said.

Ever since March of 2011, when uncertainty prevailed over whether the Republican-controlled House of Representatives would pass a defense budget, “the Pentagon has faced a level of budgetary uncertainty unprecedented in this history of this country,” the Congressman said.

“If we accept the OCO approach … we are still in that place,” he added.

Writing in the Wall Street Journal on Oct. 20, US Defense Secretary Ash Carter noted global challenges from China to Russia to Syria and Ukraine. “In this uncertain security environment, the US military needs to be agile and dynamic. What it has now is a straitjacket,” Carter wrote. “At the Defense Department, we are forced to make hasty reductions when choices should be considered carefully and strategically.”

Smith acknowledged that there is “a lot of good” in the NDAA, but, he added, “the budgetary uncertainty that it perpetuates outweighs that good.”

The budgetary uncertainty in Washington is playing out against an international backdrop that is peppered with security challenges.

Smith listed Islamic extremism as the No. 1 threat to the United States. Russia and China, he said, pose challenges to a lesser extent.

There is an enormous amount of frustration in the United States because “we aren’t simply able to force our will on the bad actors of the world,” he said. “That we can’t force [Russian President Vladimir] Putin to be more reasonable; that we can’t force Iran to stop supporting terrorism; that we can’t force places like Syria and Libya and Yemen to have a stable government that does not breed terrorism. For that matter, we can’t force even purported allies like Saudi Arabia from allowing some of their citizens to continue to fund some of that very extremism.”

Smith reserved some of his exasperation for the Republican presidential hopefuls. There is a “very dangerous thread” running through their debates on foreign policy, he said.

“It is all frustration and no solution… That way of looking at the world is incredibly naïve to begin with, but also very dangerous,” he said, warning that such an attitude would drive the United States into multiple wars around the world.

“You have to ask yourself the question: If we wind up with a Republican President how many wars do they intend to start… and what do they think the outcome is going to be?” he added.

One of the biggest lessons from the past dozen years is that there is a limit to the outcomes the US military can force in other parts of the world, said Smith.

He advocated building partnerships and negotiating diplomatic solutions and cited US policy in the Horn of Africa as a good example of such an approach. The United States, while working with regional partners such as Ethiopia and Kenya, has managed to contain the threat posed by local terrorist groups.

“A strategy of having a coalition behind you is not weakness, it is intelligence,” Smith said in a conversation moderated by Daniel Chiu, Deputy Director of the Atlantic Council’s Brent Scowcroft Center on International Security.

But Smith said what he found most discouraging was the difficulty finding partners—moderates—in the fight against Islamic extremism. He expressed particular frustration with Arab Gulf countries, including Saudi Arabia and the United Arab Emirates, which in their early opposition to Syrian President Bashar al-Assad, he said, had funded groups that have wound up joining the ranks of the Islamic State of Iraq and al-Sham (ISIS).

In Syria, it is going to take a concerted effort with moderate allies—not US troops on the ground—to shrink the space for extremists and find a solution to the war that is now in its fifth year; in Afghanistan, what is required is an Afghan government that can stand up for itself; and with Russia, what is needed is patience, Smith said. “At the end of the day… Putin’s economy is in shambles. Russia is weaker now than they were before, certainly from an economic standpoint,” he said.

Advocating a need to confront Russia where appropriate—in Ukraine, for example—Smith said the United States should provide lethal aid to the Ukrainian military, but while doing so must be careful not to start a war with Russia.

When it comes to China, Smith said, the Asian nation has more invested in a peaceful and prosperous world than either Russia or ISIS. “They are our potential partner… and we should find those opportunities to work with them where we can, while continuing to work with our other allies in the Asian region to make sure that China simply doesn’t force its will upon them to gobble up territory,” he said.

Image: “If we don’t get rid of the budget caps the Pentagon is going to be facing a level of uncertainty that is going to continue to make it very difficult to budget,” Rep. Adam Smith (D-WA), Ranking Member of the House Armed Services Committee, said at the Atlantic Council on Oct. 21. Daniel Chiu (right), Deputy Director of the Atlantic Council’s Brent Scowcroft Center on International Security, moderated the discussion. (Atlantic Council/Victoria Langton)