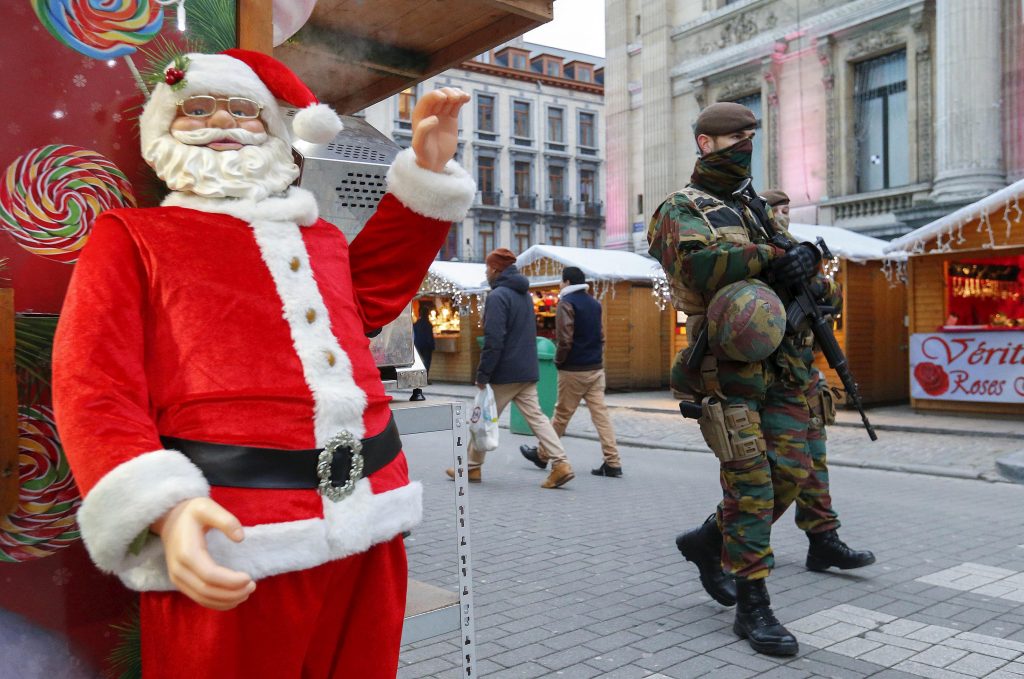 The Visa-Waiver Program is an “expression of one of the greatest soft powers” of the United States that is underpinned by significant law enforcement cooperation, and it would be a mistake to amend it without consulting partner countries, said Damon Wilson, Executive Vice President of the Atlantic Council.

“We need to keep America open even as we keep America secure,” said Wilson, who was the point person at the National Security Council when the Visa-Waiver Program (VWP) was expanded to eight new countries in February of 2009. Under the program, citizens of participating countries are allowed visa-free travel into the United States for a period of ninety days.

The fact that all of the terrorists who attacked Paris on Nov. 13 were European citizens has ignited a debate in the United States about the future of the VWP. Members of the US House of Representatives on December 8 passed legislation that would bar citizens of Iran, Iraq, Sudan, and Syria or those who have visited those countries in the past five years, from traveling to the United States without a visa. Some lawmakers have suggested temporarily suspending the VWP.

At the heart of the VWP is a “bargain” that gives the United States significant access to law enforcement and counterterrorism cooperation with its partners and goes a long way toward strengthening US security, while encouraging the flow of tourism and trade, said Wilson.

“We shouldn’t see [the VWP] as a weakness; we should see this as a strength,” he added.

Damon Wilson spoke in an interview with the New Atlanticist’s Ashish Kumar Sen. Here are excerpts from our interview.

Q: In the wake of the Paris attacks and the threats posed by homegrown terrorists is it time to take a second look at the Visa-Waiver Program as some members of Congress insist?

Wilson: The Visa-Waiver Program is not a static program. It has gone through a whole range of enhancements as our information, intelligence, and technological capabilities have improved. VWP has proven to be an effective and dynamic model that represents a bargain—open travel to the United States in exchange for greater sharing of law enforcement and counterterrorism information.

Of course, the first priority for American policymakers in the wake of the Paris attacks is to focus on how to protect the homeland. Taking a look at the VWP is a natural outcome of that, but it should be done in a way that recognizes that the program is a very effective tool to strengthen our security because the prospect of open travel is what gives us extraordinary access to sensitive law enforcement and intelligence information that can help us protect the United States.

Q: What would be the consequences of suspending — even temporarily — the VWP?

Wilson: Suspension of the program is a complete non-starter. It would lead to the abrogation of all the law enforcement and counterterrorism agreements that we have underpinning the VWP. We would actually lose visibility and access that we gain through the VWP into those that are traveling to the United States. It would also lead to stark repercussions for Americans traveling abroad who would face onerous visa requirements.

Q: What does the VWP mean to the United States?

Wilson: For the United States it has three benefits. First, the VWP is our entrée for gaining better cooperation on law enforcement and counterterrorism so we can protect the homeland. Second, it facilitates the open travel of about thirty million people to the United States who spend well north of $100 billion a year in our economy. It is a huge economic boon to our country. And third, at the end of the day the VWP is one of the best symbols of the soft power of the United States.

At the strategic level, VWP is a vehicle for America’s power of attraction as a force magnifier of our influence in the world today. We should be proud of that and we should look to get that right, not look to end that, curtail that, or block that out. We need to keep America open even as we keep America secure.

Q: What does it mean for our partners, especially Europe?

The VWP has also been a process through which Europe has been able to work more closely with our law enforcement organizations on how to strengthen not just national policies within the Europe. Our engagement with Europe on the VWP has strengthened EU competency on some of these law enforcement issues.

Q: How important is it to include our partners, especially in Europe, in this discussion on the future of the VWP?

Wilson: When I worked at the National Security Council I was very proud that we worked extraordinarily hard to expand the VWP in February of 2009. We opened it to include nine more nations allowing millions more to travel to the United States. We were able to do that expansion because we introduced stronger security measures—ESTA (Electronic System for Travel Authorization), which provides for a tremendous insight on law enforcement issues for visa-free travel.

At the same time, we removed the greatest grievance that we had with many of our greatest allies, allies that were standing shoulder to shoulder with US soldiers that were fighting and dying in Iraq and Afghanistan, and yet weren’t able to travel to the United States. We need to remember the great benefits that came both in terms of security enhancements and in deepening our alliances and partnerships with some of these countries by removing this extraordinary grievance.

It is not as if our VWP partners are ignoring the implications of the Paris attacks. This is their Number One priority. This is a golden opportunity to use the incredible fabric that we have created through the VWP to open up another strategic conversation with our European allies and partners on how we get this right to protect our countries. And, at the same time, strengthen access and travel into Europe and the United States. As Europe grapples with this the United States should be at the table. We should not ignore our partners or move forward unilaterally with measures.

Wilson: In exchange for a country entering the VWP they have to go through a series of rigorous steps that often require intense negotiations with an inter-agency team from the United States that includes the Department of Homeland Security, the Department of Justice, the FBI, and the Department of State. Many countries entering into the VWP have to work out with this grouping a series of bilateral security arrangements in terms of exchange of data, and law enforcement and counterterrorism cooperation. So the precursor is, do we have many of those rock-solid agreements in place on a bilateral basis?

As part of the VWP, citizens who are traveling have to participate in ESTA, which provides for advanced screening for law enforcement and counterterrorism purposes even before any traveler actually lands on US soil. Most of the reporting on the VWP misses that point.

The VWP is not an open border. It is a way to secure open borders. It is a set of layered security measures that involve comprehensive screening of travelers to the United States prior to their departure, at various points throughout their journey, and upon their arrival at US points of entry.

Q: Given its obvious benefits, should VWP be expanded?

Wilson: First, we should be using the political attention to these issues in Europe, the United States, and other visa-waiver partners to strengthen security cooperation. We have come a long way, but as our technology, capabilities, and capacity expands we have steps that we can take to strengthen the VWP. That is the right first step.

So we want to strengthen it first, and then smartly continue to welcome those countries that meet certain standards. The threshold to join the VWP is based on the reality of rejection rates at US consulates worldwide showing that countries that have the greatest potential for illegal immigration into the United States are just not going to qualify. This will not be a program that would be applicable to a vast majority of countries. It is a program that is exclusive and applicable to our closest partners and allies. Over time there will be room for expansion.

One of the key areas to get expansion right is that as the European Union deals with this more effectively as a union there are five EU member states that remain outside the VWP (Poland, Romania, Bulgaria, Cyprus, and Croatia). As we strengthen security and as the EU strengthens its competency on these issues, the first area to consider for expansion would be to treat Europe as a whole once we have got this right.

Q: What are your thoughts on the House bill? Does it violate US obligations under the WTO? Iran, for example, has been included in the bill at a time when Europeans are looking to do business with the Islamic Republic.

Wilson: The key issue we want to deal with is the clear and present danger that comes from foreign fighters—citizens from the United States and other countries that are in the VWP who have traveled to Iraq, Syria, Afghanistan to engage in battle and are poised to come home and cause damage—in conjunction with radicalization of our own citizens. The reality is that we have seen homegrown terrorism in France.

The provision to take a look at travel to these countries makes sense, but the way that it is applied is what is key. To get that right will take consultations with our closest allies who are equally concerned about the travel of their citizens to these countries.

Image: Belgian soldiers patrol along “Winter Wonders,” a Christmas market in central Brussels on November 27. Security was stepped up after the terrorist attacks in Paris on November 13. (Reuters/Yves Herman)