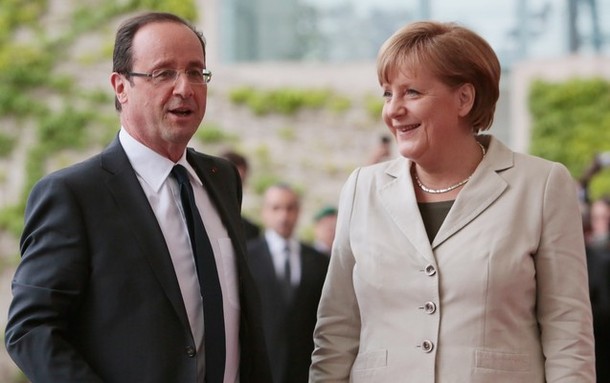 Tal-y-Wern, deepest, darkest Wales. Plinlimmon, Cader Idris, and Mount Snowdon slumber around me as I write.  Those great, sleeping Welsh dragons that legend has it will awake in the hour of Cymru’s (Wales) greatest peril.

This is Dylan Thomas country full of myth and the legends of failed struggles against the great beast to the east – England.  Sitting here listening to the sound of sheep and swallows, watching house martins dove and dive around me it is just about as far from the Euro crisis as it is possible to get these days in Europe. And yet here it is, oozing from the political landscape like the metal-laden waters that seep from the ubiquitous Welsh slate.

The second half of the Euro-crisis is now well underway and within the year I, the Dutch taxpayer, will either own all of southern Europe’s debt or the Euro will be in a death-dive and my savings with it.  That was the stark choice on the Berlin menu last night for Europe’s two most important politicians – Chancellor Merkel and newly-crowned President Hollande.

Bond’s the name. Eurobond.  Forget all the talk of ‘growth’. ‘Growth’ is but a French euphemism for the ‘mutualization’ of southern Europe’s (and France’s) enormous debts in the name of ‘Europe’.  In much the same way as ‘austerity’ is a German euphemism for ‘hands off my money’.  You will hear a lot of ‘mutualization’ in the months to come, reinforced by calls for ‘solidarity’ as southern Europeans seek to force northern Europeans to pay for their profligacy and northern Europeans try to limit their exposure to what could become a life-long dependency.

And yet something has to shift and Hollande may have a point.  European civilization began in Greece and may end there if decisive action is not taken. There is a humanitarian tragedy developing in Greece which is a disgrace to modern Europe. Can the need to support Greeks be separated from the now blindingly obvious–Greece’s exit from the Euro–without bringing down both the single currency and/or European democracy?

To be frank the latter worries me more than the former. To British ears the ease with which the majority of southern Europeans seem prepared to abandon democracy for technocracy seems bizarre but then in most of Europe’s periphery countries democracy only dates from the mid-1970s at the earliest.  And, of course, a drowning man will hang onto any piece of flotsam and jetsam and that is all that is on offer at present from Europe’s hopeless leaders.

What is also clear is that it will take far longer than hoped for southern European countries to be stabilized and cost far more. Whatever happens a plan is needed to that effect which does not simply create the excuse for further profligacy and at the same time offers people some hope. This is what we pay leaders for.

And what of Britain?   The mood on the farm here is pretty belligerent.  This time last year, I conducted a ‘scientific’ survey in a pub in my native Yorkshire where the mood was clear–get us out of this mess. It is not of our making and we did not vote for it. Yesterday I posed the same question here and got the same answer.

Welsh native wit has a point.  If the only way Greece can recover is outside the Euro, the only way Britain can recover influence is outside the EU. Berlin and Paris have successfully used the EU to neutralize Britain, which has become a kind of Belgium with nukes. Indeed, for the first time in a thousand years Europe has nothing to offer Britain and Britain nothing to offer Europe.

Worse is to come. To pay for France’s enormous debts, Hollande will insist upon a British-busting tax on financial transactions in the name of ‘growth’, ‘Europe’, ‘solidarity,’ and ‘mutualization’.  Indeed, the French seem to see Britain as a large, gagged cow tethered to the continent ripe for milking.  More likely than not, in an effort to protect the German taxpayer from French ambitions for ‘growth,’ Merkel will accede to such demands.

Is there a middle way?  In the longer-term no but in the short-term one must be found.  Deputy Prime Minister Nick Clegg suggested recently that one of the most successful political entities in history could not survive without the EU and by extension the ‘guidance’ of self-interested Berlin and Paris. That is patently wrong. At the same time Britain needs to play an active role in solving what is now a strategic crisis. However, if Britain is not actively courted as a strategic partner by Germany and France then Britain must instead focus its future on a dynamic world economy and will be forced to turn away from a European economy that will be in intensive and expensive care for years and a European political project that is inimical to the British interest. That is the other choice implicit in this crisis.

The bottom-line is this: the only way to save the Euro is to move towards political and fiscal union via ‘mutualization’ and ‘solidarity’. – Merklande.  To that end a European finance ministry and minister is just around the corner.  Forget talk of the single market – the Euro is the EU and the EU is the Euro.  And, the British should be under no illusions; Europe’s political elite will go to great lengths to protect the Euro – Europe’s quintessential political project.

As they say in Wales – if we have to part let us do so as friends.

Merkozy is dead. Welcome to Merklande?