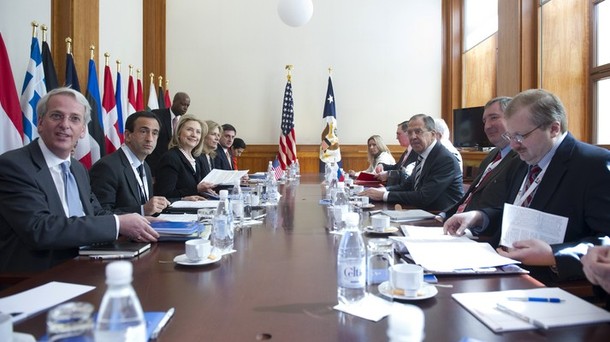 Don’t you just love NATO speak? Yesterday in Berlin NATO Foreign Ministers settled down to a working lunch to discuss ‘progress’ on Operation Unified Protector (OUP) in the skies over Libya. Personally, I have never been able to eat and think which could explain the ensuing Statement on Libya, which in its brevity and truth wobble suggests more Hock than work. Thankfully, Presidents Obama, Cameron (he is at least behaving in a presidential manner) and Sarkozy issued a more sober statement bereft of the veritas vino that seemed to have affected their foreign ministers.

The statement is a masterpiece of NATO speak and thus needs interpreting into plain English. This is something that has not been seen at NATO Headquarters since the Scottish occupied it back in the early naughties – it was plain but incomprehensible.

The “valuable” contribution made by OUP members was noted demonstrating “broad-based” support” for the Libyan air operation. Roughly translated that means: we know there are not enough members doing enough of the right things but that is all you are going to get. The statement goes on, “NATO will continue to coordinate its actions with the United Nations, other regional actors and international organizations”. You can take that as meaning, whilst we might not be able to agree amongst ourselves over the best course of action, we can be pretty sure we can find point our particular point of view somewhere in the mythical and rumoured international community.

There is at least agreement that, “Gadaffi and his regime have lost all legitimacy” and the ministers correctly endorse the Doha meeting of the Contact Group which called on the long-time Libyan leader to depart the scene of the tragedy he has inflicted on his country. This must have been before the main course and after a swift gin and tonic. The statement also calls for an end to armed aggression by the regime, withdrawal of all Libyan forces to agreed bases and unfettered humanitarian access. So far, so good but note the lack of any political course of action (sorry, I used the word ‘action’ in completely the wrong context – meaning sharing risk equally and doing things together).

But then comes the killer word – ‘robust’. Robust in NATO speak is like the British use of the word ‘interesting’ in diplomatic speak. As you may know the British have several stages of alert ranging from ‘a tad concerned’ when a crisis erupts , to ‘a bit niggled’ when war is declared. However, nothing in the British dip lexicon compares with ‘interesting. Indeed, whenever the British respond to ‘language’ with the word ‘interesting’ it can be thus translated; a load of complete tosh, you cannot be serious and how can you possibly think that. Robust in NATO speak is only deployed when disagreement is critical. Indeed by invoking Article Robust are invited to interpret any and all action as ‘robust’, even if they are not actually doing anything.

But that is not the clincher. The statement then goes on to “…pay tribute to the skill, bravery and professionalism of OUR men and women in uniform”. Well, excuse me but in Yorkshire (from whence I hail) we call a spade a spade and not a “joint effort”. By ‘Our’ men and women – do they not mean American, British and French men and women? I spoke to an RAF officer the other day (one of ‘our people) and he though NATO served the coffee. He was wrong – it serves the wine.

And thus to the crunch and the ultimate in NATO speak, “…we are committed to provide all the necessary resources and maximum operational flexibility”. That means, we invite America, Britain and France to pay for all of this and do all the dangerous buts although at lunch we the rest of us might serve the wine – subject to parliamentary approval.

The NATO Secretary-General? Sack him. We need St Francis of Assisi.

Professor Julian Lindley-French is a member of the Strategic Advisor’s Group of the Atlantic Council of the US in Washington, Special Professor of Strategic Studies, University of Leiden, Netherlands and Associate Fellow of the Royal Institute of International Affairs, London. This essay first appeared on his personal blog, Lindley-French’s Blog Blast. Photo credit: Getty Images.