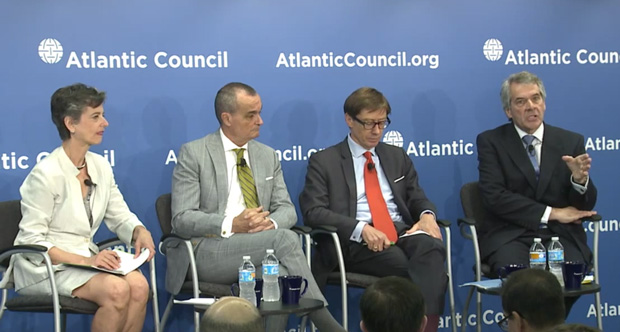 Failure to secure a deal that limits Iran’s nuclear program in return for phased sanctions relief could unravel a crippling sanctions regime on the Islamic Republic if that outcome is perceived to be the West’s fault, two European diplomats said May 26.

“If we were to walk away, or if the [US] Congress were to make it impossible for the agreement to be implemented, then the international community would be pretty reluctant, frankly, to contemplate a ratcheting up further of the sanctions against Iran,” Sir Peter Westmacott, the United Kingdom’s Ambassador to the United States, said at the Atlantic Council.

Westmacott pointed out that a number of countries, including China, India, and Turkey, already purchase oil from Iran after having received a US exemption from sanctions.

“I suspect we would probably see more sanctions erosion than less, unless the deal collapsed because of reasons that were visibly, clearly, incontrovertibly Iran’s responsibility,” he added.

“We should not harbor any illusions about the international sanctions regime,” Wittig said.

“Many of the emerging countries would consider Congress blocking this deal as a trigger to at least question the present sanctions regime,” he said. “I would see a certain danger if the blame game in the international community comes to the conclusion that it is not Iran that is to blame. Then the international solidarity that has been quite strong in recent years would most probably erode.”

US President Barack Obama, under pressure from Republican as well as Democratic lawmakers, on May 22 signed a bill that would give Congress the power to review and potentially reject a nuclear deal with Iran.

Iran has demanded immediate sanctions relief, but Wittig said that even in the best-case scenario—if Iran complies with the agreement’s terms and the International Atomic Energy Agency (IAEA) verifies its compliance— sanctions relief won’t happen before year’s end..

Negotiators from the so-called P5+1—the United States, the United Kingdom, France, Russia, China, and Germany—and Iran are working toward a June 30 deadline to finalize the technical details of a framework agreement reached April 2 in Lausanne, Switzerland.

The sanctions regime would remain in place if Iran failed to live up to commitments it made in Lausanne, said Westmacott.

In such a situation “we carry on with the sanctions, and in certain areas it might be right to raise the level of those sanctions,” he said.

“My sense is that we are probably not far away from the high-water mark of international sanctions against the Iranian economy, but exactly what happens next depends on what happens” on June 30, he added.

Westmacott and Wittig were part of a panel that included France’s Ambassador to the United States, Gérard Araud. Barbara Slavin, Nonresident Senior Fellow at the Atlantic Council’s South Asia Center, moderated the discussion.

Sanctions imposed by the United Nations Security Council, the European Union, and the United States in response to Iran’s nuclear program have also hurt Western companies, particularly European ones, that had strong economic ties with Iran prior to the Islamic Revolution that toppled the Shah and brought Ayatollah Ruhollah Khomenei to power in 1979.

All three Ambassadors credited strong transatlantic unity for the progress in nuclear negotiations with Iran.

The United Kingdom, France, and Germany initiated nuclear discussions with Iran in 2003 at a time when the George W. Bush administration had a policy of no acknowledged diplomatic contacts with Iran.

“Without [the United Kingdom, France, and Germany] there would have been no process with Iran and there certainly would not have been the progress that we see today,” said Slavin.

European negotiations stalled during Mahmoud Ahmadinejad’s tenure as President of Iran, between 2005 and 2013. The process restarted publicly in 2013 following the election of Hassan Rouhani as President.

Months of intense negotiations produced a framework agreement in April. All three European Ambassadors were, however, clear-eyed about the prospects for a final deal.

Araud suggested that a deal might be unlikely by June 30 because technical details will need to be worked out.

“It is very likely that we won’t have an agreement before the end of June, or even after June,” said the French Ambassador. “We could have a sort of fuzzy end to the negotiations.”

Westmacott said a deal is “not yet in the bag and we are all very clear that if we cannot get the right deal then there won’t be a deal.”

But all three Ambassadors also agreed that the framework agreement reached in Lausanne is a significantly better option for preventing Iran from acquiring nuclear weapons.

‘Devil is in the details’

“Do we think that we can trust Iran with an agreement?” asked Wittig. “The answer is no. Our motto would be distrust but verify. Trust has been broken in the past… We can only accept a regime with a long-lasting monitoring mechanism.”

Noting that the most difficult phase in the negotiations may lie ahead, Wittig said the challenge is to transform political statements into “reliable and watertight provisions” that leave no doubt about the duties of all parties.

“In this kind of endeavor the devil is, of course, in the details,” he added.

Since April 2, negotiations have proceeded at a slow pace as negotiators work out technical details in the framework agreement, which, significantly:

If Iran breaks its promises, a so-called snapback provision allows sanctions to be automatically reimposed.

Concerns about a deal

Israel and Iran’s Persian Gulf neighbors—Saudi Arabia in particular—worry about the prospects of a nuclear deal with Tehran. They fear that an easing of sanctions will cause Iran to devote its resources towards its hegemonic ambitions.

Negotiations on Iran’s nuclear program have, however, been isolated from discussions on its regional policies, including support for Hezbollah in Lebanon and Houthi rebels in Yemen. The European Ambassadors said linking these issues would guarantee the talks’ failure.

“You can kill this deal if you link it to extraneous issues,” said Wittig.

However, if a deal is reached, it could create an opportunity to encourage Iran to be a more responsible stakeholder, he added. “That potential we want to explore once the deal is done.”

Westmacott said Iran’s neighbors need to be assured that “there will not be a carte blanche for the Iranians to continue to destabilize the region through the use of proxies or through other areas of activity.”

Obama sought to allay concerns among US Gulf allies and partners when he hosted leaders and officials from the six-member Gulf Cooperation Council (GCC) at Camp David earlier in May.

Saudi Arabia has said it would demand similar terms agreed to for Iran in any nuclear deal.

Araud, who was France’s negotiator on the Iranian nuclear issue from 2006 to 2009, said the deal’s most worrying aspect is the precedent being set by the creation of a new “one-year breakout state.”

“One of the concerns that we will have to address after the agreement is that you don’t have not only Saudi Arabia and not only in this part of the world… countries rushing to become one-year breakout states,” Araud said.