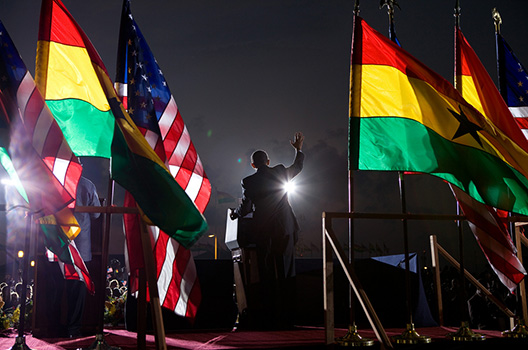 In the latest National Security Strategy released on February 6, President Obama asserts, “Today, the United States is stronger and better positioned to seize the opportunities of a still new century and safeguard our interests against the risks of an insecure world.” Yet, when specifically addressing Africa, which the President himself in an earlier strategy document described as “more important than ever to the security and prosperity of the international community, and to the United States in particular,” he merely limited himself to stating, “We are deepening our investment in Africa, accelerating access to energy, health, and food security in a rapidly rising region.”

In fact, insofar as Africa content goes, the entire strategy document devotes just three paragraphs to sub-Saharan Africa (alongside a few passing mentions of North Africa in the section entitled “Seek Stability and Peace in the Middle East and North Africa”):

Africa is rising. Many countries in Africa are making steady progress in growing their economies, improving democratic governance and rule of law, and supporting human rights and basic freedoms. Urbanization and a burgeoning youth population are changing the region’s demographics, and young people are increasingly making their voices heard. But there are still many countries where the transition to democracy is uneven and slow with some leaders clinging to power. Corruption is endemic and public health systems are broken in too many places. And too many governments are responding to the expansion of civil society and free press by passing laws and adopting policies that erode that progress. Ongoing conflicts in Sudan, South Sudan, the Democratic Republic of the Congo, and the Central African Republic, as well as violent extremists fighting governments in Somalia, Nigeria, and across the Sahel all pose threats to innocent civilians, regional stability, and our national security.

For decades, American engagement with Africa was defined by aid to help Africans reduce insecurity, famine, and disease. In contrast, the partnerships we are forging today, and will expand in the coming years, aim to build upon the aspirations of Africans. Through our Power Africa Initiative, we aim to double access to power in sub-Saharan Africa. We will increase trade and business ties, generating export-driven growth through initiatives like Trade Africa and AGOA. We will continue to support US companies to deepen investment in what can be the world’s next major center of global growth, including through the Doing Business in Africa campaign. Moreover, we are investing in tomorrow’s leaders—the young entrepreneurs, innovators, civic leaders, and public servants who will shape the continent’s future. We are strengthening civilian and military institutions through our Security Governance Initiative, and working to advance human rights and eliminate corruption. We are deepening our security partnerships with African countries and institutions, exemplified by our partnerships with the UN and AU in Mali and Somalia. Such efforts will help to resolve conflicts, strengthen African peacekeeping capacity, and counter transnational security threats while respecting human rights and the rule of law.

Our investment in nutrition and agricultural capacity will continue, reducing hunger through initiatives such as Feed the Future. We will keep working with partners to reduce deaths from Ebola, HIV/AIDS, malaria, and tuberculosis across Africa through such initiatives as the President’s Emergency Plan for AIDS Relief and the Global Health Security Agenda. The Ebola epidemic in 2014 serves as a stark reminder of the threat posed by infectious disease and the imperative of global collective action to meet it. American leadership has proven essential to bringing to bear the international community to contain recent crises while building public health capacity to prevent future ones.

There are also a few other shout-outs to Africa elsewhere in the document. The administration declared that while the United States is “rebalancing toward Asia and the Pacific,” it was also “seeking new opportunities for partnership and investment in Africa and the Americas, where we have spurred greater agriculture and energy-related investments than ever before.” Promising to meet financial commitments to the United Nations and bolster regional organizations as part of its positing of a broader definition of national security to embrace institutions, the document also pledged to “strengthen the operational capacity of regional organizations like the African Union (AU) and broaden the ranks of capable troop-contributing countries, including through the African Peacekeeping Rapid Response Partnership, which will help African countries rapidly deploy to emerging crises.” Promises are also made to “partnering with African entrepreneurs to launch clean energy projects and helping farmers practice climate-smart agriculture and plant more durable crops.” A nod is also given to the need to “extend and enhance tools such as the African Growth and Opportunity Act (AGOA),” which expires in less than eight months unless Congress votes to extend it and the President signs the legislation, as well as to the Young African Leaders Initiative. Africa’s buoyant economic growth is also invoked: “Trends in economic growth also signal what is possible; sub-Saharan Africa has averaged an aggregate annual growth rate of over 5 percent for the last decade despite the disruptions of the world financial crisis.”

While all this is well and fine — indeed, there is little in this litany that most Africanists would find to take issue with — there are several things which will leave both the administration’s critics and even some of its supporters befuddled.

First, the strategic element of the Africa component in what, after all, is supposed to be the “National Security Strategy,” appears to be missing. One has a series of factual assertions and analytical conclusions, coupled with a catalogue of programs and initiatives, some of which were announced at the historic US-Africa Leaders Summit last August, the largest gathering of African heads of state and government ever convened by an American president. What one does not have is anything approaching an articulation of what America’s national interests in Africa might be (and the prioritization among those interests), much less how the country’s political, economic, and cultural power, together with its military forces and intelligence assets, might be leveraged to secure those objectives.

Second, the document acknowledges many of the security challenges found in Africa, including the growth and spread across Africa of militant Islamist groups (although the term “Islamist” never appears in the text), the continuing disintegration of Libya, the increasingly brutal insurgency in Nigeria and instability in the Democratic Republic of the Congo, and the growth of organized crime and drug trafficking — all these are major concerns, not only for the countries immediately affected, but also for the United States and its European partners. Yet the US Africa Command (AFRICOM), the geographic combatant command responsible for implementing whatever military operations are eventually deemed necessary, whether assisting African partners or taking direct action, has never been adequately resourced to carry out its ordinary assigned mission, to say nothing of extraordinary challenges which have arisen in recent years. Unaddressed is the question of whether it has the wherewithal to carry out its mission, even in the limited cases where the administration would determine “our enduring interests demand it.”

Third, while the private sector is encouraged to deepen investment — and, indeed, many of the Obama administration’s Africa initiatives, including its signature Power Africa, are really public-private partnerships — the strategy document is short on details about the incentives and facilitation that ought to be available to US businesses so they might do their part in achieving the objectives of national strategy with respect to Africa.

The administration deserves credit for its efforts over the past few years to shift the narrative on Africa toward a greater focus on the opportunities on the continent. However, if this momentum is to be maintained, it is well past time to move beyond the cheerleading and into the hard work of realistic strategizing.