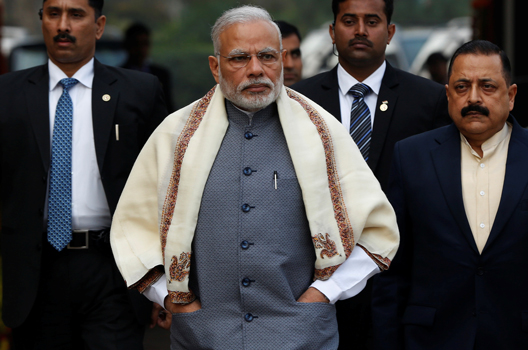 Prime Minister Narendra Modi walks to speak with the media as he arrives at the parliament house to attend the first day of the budget session, in New Delhi, India, January 31, 2017. (Reuters/Adnan Abidi)

Donald Trump’s election as the next president of the United States not only poses a threat to the American liberal-constitutional democratic order at home, but it also threatens to end the international liberal economic and democratic order that successive US administrations have built and promoted during and in the aftermath of the Cold War.

The three pillars of US foreign policy until now have been: (1) the building of a liberal economic order institutionalized through global rule-based regimes; (2) the provisioning of public security goods through a combination of lone defense of the global commons and military alliances with regional powers; and (3) the promotion of a liberal democratic-constitutional order globally. Trump’s tweets and utterances suggest that his administration is likely to upend all three of them.

If Trump goes through with the radical modifications that he has proposed, India will have to make significant adjustments in its foreign policy. Most will likely induce significant domestic pain for New Delhi.

Trump’s turn to economic nationalism, dirigisme, and mercantilism is not significantly different from India’s own economic approach in the first four decades following its independence from Britain in 1947. Thereafter, however, India accepted the economic logic of liberalization and globalization and sought investments from US multinational corporations, encouraging them to offshore manufacturing and services to India. Although India eagerly sought and gained access to open US markets, it restricted access to foreign capital, less in the case of manufacturing but more so in services. The Indian case for restricted access rests on the argument that it is a developing economy that needs breathing room to grow its own competition. With the United States turning inwards and trying to reignite its own declining manufacturing base and stanch the flow of services from backroom operators in India and cheap H1B-visa labor, the economic model that India has come to rely on for nearly two decades may be over.

The economic ties between the two countries, once considered the backbone of their relationship, could face considerable pressures and stress fractures in the next four years.

America’s economic turn inward harks back to Paul Kennedy’s thesis from the late 1980s of imperial overstretch, where an economically declining hegemon accepts the need to retrench from imperial commitments abroad. Like the Spanish, the French, the British, and the Soviets from past centuries, the United States, too, may decide to drastically reduce and even end its provisioning of security public goods as countenanced in its myriad security alliances around the globe and the defense of the global commons (aerospace, seas, and outer space).

India has long resented great power, especially US intervention in the Subcontinent in support of Pakistan during the Cold War. In the present context, however, US retrenchment will likely prove highly problematic for New Delhi for two reasons. First, India has become reliant on US pressure to restrain Pakistan in the nuclear realm and its support for terrorist groups. India has also sought US influence to restrain the worst Pakistani elements in Afghanistan. Second, China might rush to fill any power vacuum in the Indo-Pacific region left in the wake of the United States’ premature retreat. It would end the imagined alliance of democracies (Japan, the United States, Australia, and India) that in theory could act as an institutional bulwark to restrain China. The premature end to the US pivot to Asia would force India to hurriedly expand its own power projection capabilities, a development that will likely cause great economic and strategic consternation in New Delhi.

Finally, the US-India relationship, especially from the George W. Bush administration onwards, has substantially rested on the ideological and institutional confluence between the two countries as two democratic states with a strong tradition of constitutionalism. Trump’s own authoritarian tendencies and embrace of authoritarian rulers, including Russian President Vladimir Putin and other rightwing leaders and parties in Europe, is an indicator that the United States might jeopardize its global liberal democratic project in exchange for hard Realism. Hence the imagined basis for the flowering relationship between the world’s largest and oldest democracies, that has yet to mature to fully, might suffer prematurely.

The above analysis is obviously speculation. Trump has put forth no concrete plan or delineated details of how his administration will actually govern. The speculation in this brief is based on his tweets and statements. But past analysis of US presidential statements suggest that presidents end up implementing nearly two-thirds of what they promise. Trump might still prove the exception. But if he does not, then US-India relations are headed for considerable turbulence and uncertainty in the near future.

Gaurav Kampani is a nonresident fellow at the Atlantic Council’s South Asia Center. He is also an Assistant Professor of Political Science at the University of Tulsa.