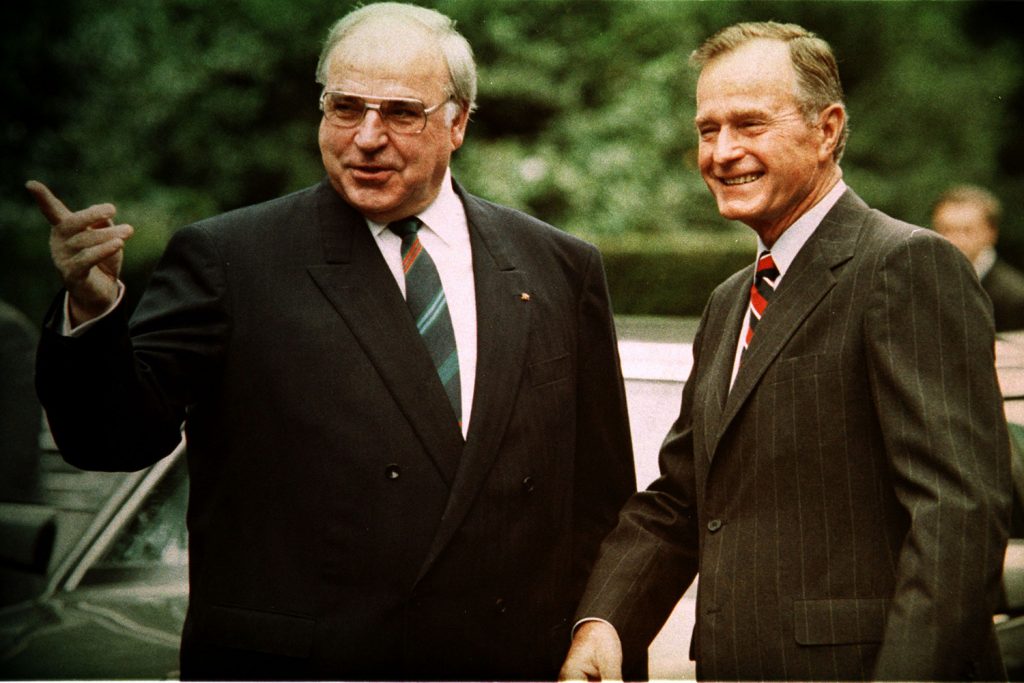 Editor’s note: The views outlined in this piece reflect the author’s own and do not represent any position of the Atlantic Council.

The architect of a united Europe, a reunited Germany, and Euro-Atlantic expansion to the East would have turned ninety on April 3. Former German Chancellor Helmut Kohl, like few others, changed the world with his vision and became an inspiration to others.

Germany’s reunification project broke through the isolation of twentieth century Europe and was a central piece in the fall of communism throughout the Eastern Bloc, which began to return to Europe.

As he sought to build international support for German reunification, Kohl positioned Germany close to the United States, whose leadership became decisive for reunification. “This friendship and this partnership with the United States is of existential importance to us Germans,” Kohl said during a visit to New York in June 1990. “There is no price that can buy it.”

Kohl knew that German reunification would have major ramifications for Europe and the world, and could not be done without sitting at the table with everyone—both supporters and opponents. Through his engagement, he managed to secure support, counter opposition, and dispel neighbors’ historical fears of a reunited Germany.

But this journey was by no means easy. Both the United Kingdom and France had serious reservations about German reunification. British Prime Minister Margaret Thatcher and French President François Mitterrand were worried about the outsized role a reunited Germany would have in Europe. Historical fears and geopolitical considerations on the old continent were difficult to overcome.

But in the United States, Germany had found an unwavering supporter of reunification. Kohl urged the United States to persuade London and Paris to support reunification, as failure to implement the project could blunt the geostrategic momentum for Europe and the West. Kohl, along with US President George H.W. Bush, understood that the status quo in Europe would either be broken through a peaceful reunification or through uncontrollable violence in the turbulent East. Bush and Kohl’s leadership helped overcome initial reluctance in Europe and on October 3, 1990, the reunification of Germany took place, born of the will of the German people from within and of decisive US support.

A reunified Germany has become an inspiration for the people of Kosovo who seek freedom and independence, even in the face of opponents in their region. But Kosovo’s leaders and the international community should heed several lessons from Germany’s example.

Lesson 1: Never undermine the strategic relationship with the United States

Despite ups and downs in their relationship since reunification, Germany has never directly confronted the United States. Chancellor Angela Merkel has disagreed with US President Donald J. Trump on many issues, but has never allowed these to directly threaten the strategic relationship, bilaterally and as embedded in the Atlantic alliance.

Our relations with the US are not only political, but, above all, they are emotional. The US is a synonym of Kosovo’s freedom, liberation and independence. Kosovo’s strategic relationship with the US gives it no space to strain its partnership with Washington, even if relations with Berlin or Brussels could be the cost. Nevertheless, it took the Government of Albin Kurti in Kosovo only fifty days to question this relationship when his government claimed that the United States is “sabotaging” Kosovo.

In one statement, Kurti overturned the essential principle of Kosovar foreign policy, established in 1989 by the pacifist movement of Rugova and the Kosovo Liberation Army, to maintain close and credible relations with the United States.

As it now appears that close relations with Washington are now up for political debate, supporters of close US-Kosovo ties should look to formalize tangible cooperation with the United States to protect this relationship.

Kosovo needs to learn from the history of reunified Germany. Even during times of deep disagreement, as in the lead-up to the second Gulf War, Germany has never called into question its strategic relationship with the United States, as Kurti’s statement makes it seem that Kosovo is doing now.

Kurti’s government lost a motion of no-confidence because of its failure to address Kosovo’s foreign policy challenges at a crucial time when the country must come together with our allies, not work against them. Kosovo has only one possible foreign policy orientation: the alliance with the United States and a partnership with Europe.

Our relations with the US will remain untouchable, regardless of who is sitting in the White House or who is raising the voice against the Kosovo-US relationship in Prishtina, Berlin, or the EU.

The history of German reunification shows how important it is to use geopolitical momentum to achieve goals and fulfil foreign policy visions. Former Chancellor Kohl created processes with clear predictability, allowing his political allies and his citizens to see the tangible effects of decisions and political positions.

Kosovo must understand that it lives in an ever-changing international environment where its strategic allies have to cope with their differences which will impact Kosovo’s standing. We must provide strategic reasoning to the US, EU, and its members to achieve consensus on Kosovo.

But Kosovo also has the historical trust in Washington that it can lead a way forward in the normalization of relations between Kosovo and Serbia which would be finalized with a peace agreement that ensures full mutual diplomatic recognition.

Neither Kosovo nor the European Union can achieve this geopolitical momentum alone. In order to succeed in this strategic process for the Western Balkans, the  political weight anddiplomatic machinery of the United States is needed.

The Basic Treaty of 1972, which normalized relations between the two German states accepted a degree of ambiguity in their relationship, leaving controversial points open which were only resolved with eventual reunification of Germany 18 years later.

Like Kohl, Kosovo’s leaders must break the status quo through peaceful processes so that it is not disrupted by unknown scenarios uncontrolled by them and their allies. Like Kohl, Kosovo must sit down with all those who have different opinions from us to achieve its goal: to be a full member of NATO, the EU, and the United Nations.

Germany has invested heavily in the process of Kosovo’s freedom, independence, state-building, and economic development. The people of Kosovo will forever be grateful to the country.

Historically, Kosovo has been a fault-line in relations between the West and Russia. Nowadays, Kosovo has turned into an arena for competition between the United States and the EU over who will lead the peace dialogue.

While the EU insists on a EU centric role, the United States has not explicitly excluded the Europeans from its process. The historical attachment to the United States means a majority in Kosovo want a US-led negotiation process.

Germany must join the United States to complete the key peace project of the Western Balkans, which will be crucial for peace and security in Europe. Using the Kosovo situation to squabble with Washington damages transatlantic relations and especially Kosovo, which is striving to become a valuable member of the international system.

The Trump administration is following the consistent line of all US presidents over Kosovo. President Bill Clinton led the West on Kosovo’s freedom. President George W. Bush led the West on ensuring Kosovo’s independence. Now the Trump administration seeks to make Kosovo an equal and full member of the international community and end the historical long dispute between Kosovo and Serbia. There has been a consistent bipartisan policy on Kosovo for the last thirty years. And that should remain the same.

Kosovo can only be helped when the United States and Germany act together. Any wavering of this alliance would be incredibly damaging to Kosovo and its people’s pursuit of freedom and peace.

Artan Behrami is a political advisor to the President of Kosovo. Previously he served as advisor and spokesperson to the Minister of Foreign Affairs. He was posted also as a diplomat at the Kosovo Embassy in DC. Views are his own. Twitter: @artanbehrami.