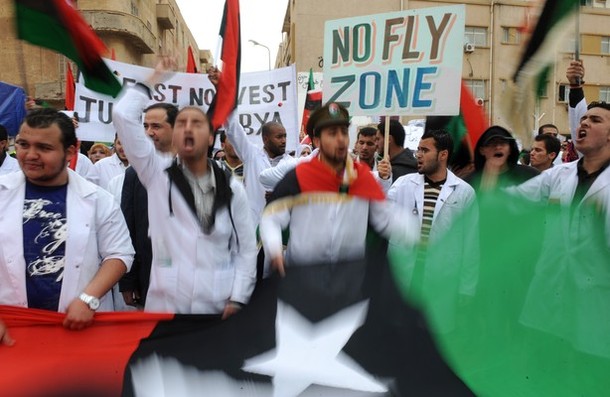 The question cited in the title is a quote from Sunday’s Washington Post attributed to a civilian in one of the Libyan cities now anticipating an attack by the forces of Colonel Gaddafi. It is a plaintive plea for help in a situation that may be starting to unravel, as forces loyal to (or bought by) the Libyan strongman seem to have slowed or stopped the momentum of the populist uprising against it.

The situation could become bleak indeed if there is no outside assistance to the rebels, a point they seem to understand. They want, even need, assistance if they are to have any chance to continue to contend for power. Right now, the preponderance of brute force is not on their side. The Libyan government has the country’s armed forces on its side, and unlike Egypt, their support has not wavered nor have they shown any reluctance to use force to put down the rebellion. The armed, essentially disorganized youth who make up the resistance seem to understand this and vow to fight on to the death. That determination reflects their idealism and hatred for the Gaddafi tyranny, but it probably also a realistic assessment that they will be treated harshly if the government wins; rebels are rarely treated with equanimity when they lose, and Gaddafi is likely to be particularly brutal if given the chance.

By now, it should be clear that Libya will not turn out like Egypt (however, in the long run, that turns out). That being the case, simply standing on the sidelines and yelling encouragement is not enough for the United States and Europe, if we are truly convinced, as President Obama has said, that Gaddafi must go. But what can we, or should the United States, do?

The intervention option is being touted increasingly from predictable quarters: neo-conservatives like Paul D. Wolfowitz, reflexive hawks like John McCain, so-called “liberal interventionists” like John Kerry, for instance. All want the United States to lead the international imposition of a no-fly zone, the semi-response of choice. The argument is that it is a low-cost, high-yield solution. It is also wrong.

As already noted in this space, such a commitment is open-ended in an environment wherein the U.S. hardly needs additional military commitments. Secretary of Defense Robert Gates has also calmly pointed out that such an action means effectively declaring war on the Libyans, since establishing the zone would require first attacking and destroying Libyan air defenses–an act of war. Could the United States really sustain what could become another long, convoluted military commitment in that part of the world?

Any proposed response must answer three questions. The first is to whom assistance is to be rendered. As far as I can tell, no one has an answer to that more specific than to “the people.” Sorry, that is not enough, and it is unclear that there is anything coherent enough about the resistance to Qadhafi to form a force with which one could coordinate a military effort. We know who we might fight AGAINST; it is not clear we know who we would fight FOR.

The second question is what outcome we would be fighting for. That question also goes back to the nature and objectives (if any beyond overthrowing Qadhafi) that the insurgents hold. They say they are fighting for freedom, and the Arab League has endorsed them as the “legitimate” government of Libya, a move that could prove awkward if Gaddafi prevails.But what will freedom look like? Will it be a fully democratic regime? An Islamist religious state (e.g. Iran)? A new Arab dictatorship? Chaos? Since the movement lacks any coherent leadership, it could be any of the above, and that makes American assistance an effective act of Russian roulette. That may be enough for Joe Lieberman, but is it enough for the rest of us?

The third question, assuming the first two can be answered positively, is what kind of aid would we provide? The United States can provide naval and air support from the U.S. fleet in the Mediterranean, but much more would require European participation–even leadership–that the European members of NATO would have to put up. To this point, they have shown little enthusiasm for the endeavor; it may be that it will take the first boatloads of refugees washing on shore in Sicily after their 170-mile voyage to convince the Italians that maybe they really should think this through. Taking charge of Libyan air space (the no-fly zone) is certainly part of that, but is it enough in the face of the imbalance between Libya’s organized armed forces and a motley crew of rebels? If it isn’t, what is the West prepared to do?

There is another concern that must be faced if the uprising falls apart, as is at least possible. What if Gaddafi turns the rout of the rebels into a recriminatory bloodbath the results of which inevitably leak into Western public attention (which they almost certainly would)? The pressure at that point to “do something” would be very difficult to resist, but would it be too late?  The precedent of Kosovo in the late 1990s comes to mind, and it is cautionary. The United States took essentially unilateral action and stopped the slaughter, but Kosovo has hardly been anybody’s idea of a big success since.

There is a short answer to the plaintive plea, “What is America waiting for?” It is that we are trying to figure out what we can and what we should do. What we ideally should do is turn the whole thing over to Europe, as argued here last week. That answer is certainly defensible, but it runs into the objective that Europe’s answer is essentially to do nothing. Maybe that is the right answer, but it certainly leaves the Libyan rebels at the potential mercy of Qadhafi, who is unlikely to show much compassion to those who would have him deposed.

That leaves a quandary. We can intervene (the U.S., the U.S. and Europe, or Europe alone), help overturn Gaddafi, and hope his successor regime is a creation of which we can be proud–or at least tolerant. Lots of uncertainties there. Or, we can all stand on the sidelines and hope for the best. At worst, the result is a humanitarian disaster; at best, it is a successful revolution whose victors are less than grateful to us for we did not do. Neither is a very attractive alternative. Is there another solution somewhere in between?

Donald M. Snow, Professor Emeritus at the University of Alabama, is the author of over 40 books on foreign policy, international relations, and national security topics. This essay first appeared at his blog What After Iraq?. Photo credit: Getty Images.