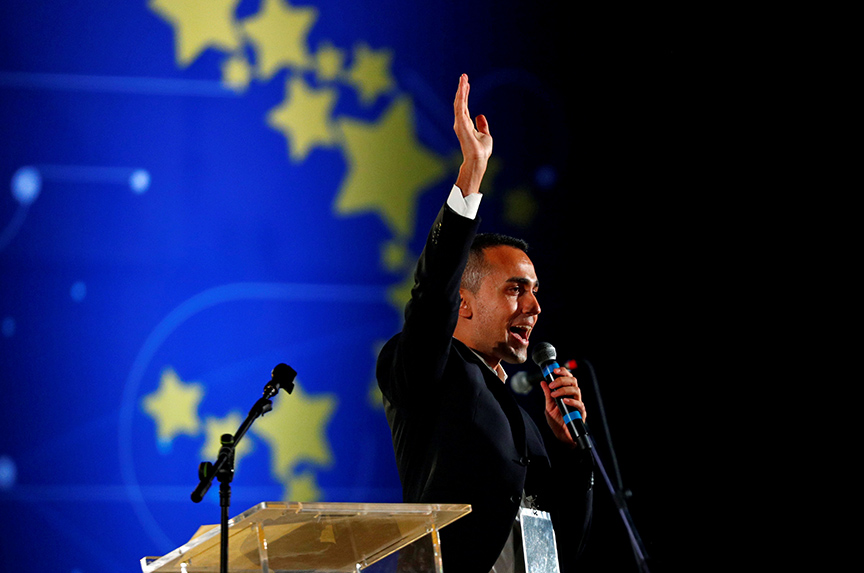 On February 7, France announced its decision to recall its ambassador to Rome for consultations, denouncing a “grave situation” that “has no precedent since the end of the war.” This unprecedented move came a day after Italy’s deputy prime minister, and leader of the Five Star Movement, Luigi Di Maio flew to France and met representatives of the Gilets Jaunes (Yellow Jackets) movement. In a letter to Le Monde, Di Maio justified the meeting saying: “I wanted to meet with representatives of the ‘Gilets Jaunes’ and the citizens’ initiative referendum group, because I do not believe that the future of European politics lies in the parties of the right or the left.”

The meeting, and ensuing French reaction, marks a peak in the escalation of rhetoric between French President Emmanuel Macron and the leaders of Italy’s ruling Five Star-League coalition over the past eight months.

Matteo Salvini, Italy’s other deputy prime minister and leader of the Lega party, has called Macron a “terrible president” and has aligned with Hungarian Prime Minister Viktor Orbán in calling the French president their main opponent in Europe, a title Macron has heartily embraced.

Italy’s leaders have also pointed to France’s colonial past to explain the migration crisis in the Mediterranean. Di Maio thus declared without a shred a nuance: “the EU should sanction France, and all countries like France, that impoverish Africa and make these people leave, because Africans should be in Africa, not at the bottom of the Mediterranean.”

Three centrifugal dynamics are at play in the current spat between France and Italy.

The first is Italian domestic politics. To a large extent, France is collateral damage in the Italian coalition’s internal strife. Embroiled in poor economic results and an inability to deliver on campaign promises, Italy’s leaders have found a convenient external enemy. The question becomes who best embodies the opposition to Macron?

Ever since taking office, Salvini’s League has shaped the government’s agenda despite technically being its minority partner. Owing to Salvini’s bombastic rhetoric, especially on immigration, the League has doubled its standing, soaring to 34 percent in EU elections polls, compared to 5 Star’s 17 percent. From labor reform to immigration, the League has imposed its far-right agenda and the inexperienced Di Maio is at pains to catch up. Di Maio’s show with the Gilets Jaunes was a somewhat desperate attempt to regain some momentum.

The second concerns the upcoming European elections in which rising opposition between liberal and populist forces is emerging as a key narrative. Such division is not necessarily negative: the European Union (EU) would benefit from a public sphere where political forces can transcend national divisions and push to the fore issues like immigration and eurozone reform that have too long been left to technocrats. As I’ve argued before, the debate pitting Macron against Orbán can, of course, be seen as evidence of further division in Europe, but it also brings a welcome “return of politics” to the Continent with debates rooted in values and competing visions of Europe.

Ever since the first direct European parliamentary elections in 1979, political parties across Europe have joined forces beyond national divisions: Macron himself allies with Italy’s former prime minister, Matteo Renzi, in Europe’s liberal coalition.

Di Maio’s embrace of the Gilets Jaunes, as the protestors appear about to form at least one list for the European elections on May 26, clearly stems for a desire to find new political partners in Europe. Di Maio’s outreach to Gilets Jaunes is, however, different from traditional coalition building due to the violent and insurrectional nature the movement has taken. Gilets Jaunes was initially regarded as a grassroots movement born spontaneously as a response to the green-friendly gas tax, but encompassing a wide array of demands from higher minimum wage to lower retirement age and a ban on outsourcing. In a country beset by lack of structural reforms, high unemployment, sluggish growth, and declining social mobility, Gilets Jaunes brought to the surface decades of pent-up public frustration at the French political establishment.

But since late 2018, the movement has taken an ugly turn, replete with violence, conspiracy theories, and anti-Semitism. Christophe Chalençon, the man Di Maio visited and one of the many figures who has emerged as a leader of the decentralized outburst, has notably called for the French army to take over and head a transitional government.

Gilet Jaunes leaders appear regularly on television denouncing Macron’s presidency as a “dictatorship” and making outlandish accusations such as blaming the French police for using Zyklon B—a poison infamous for its use by Nazis in their concentration camps—in tear gas or pointing to the terrorist attack that killed five people in Strasbourg over Christmas as a government-orchestrated false flag. Gilets Jaunes marches have led to outbursts of anti-Semitism, including journalists being called “Jewish whores” and swastika graffiti painted on walls. The rhetoric has unleashed death threats against members of Macron’s En Marche movement. The home of Richard Ferrand, the president of the French National Assembly, was the target of an arsonist’s attack.

The recurrence of these incidents and lack of condemnation by the movement’s leader leads one to draw the conclusion that such incidents are not a deviation, but rather the essence of the movement.

It is troubling that a democratically elected leader would want to lend support to such a movement.

The last force explaining the spat between France and Italy goes to deeper differences between the two countries that predate its current leaders. Italians are not wrong to complain about the lack of solidarity from major European capitals as they grapple with an immigration crisis. The Dublin asylum system gives responsibility to the first country receiving migrants. This has proved to be a burden for Mediterranean countries like Greece and Italy, especially as the 2015 crisis proved to be all of Europe’s concern.

The Schengen free circulation area is one of Europe’s greatest accomplishment, but unfortunately did not translate into sufficient pooling of resources by member states to ensure robust common borders. The frustration with Paris is particularly acute after France’s push for the ill-advised 2011 war in Libya fueled instability off Italy’s shores.

While populist leaders have hijacked the resentment created by these events to justify a nativist agenda, they have pointed to real failures of the EU. Pro-European leaders like Macron will have to strike a delicate balance between confronting populism and addressing these legitimate concerns with effective policies.

Benjamin Haddad is the director of the Future Europe Initiative at the Atlantic Council. He was the Washington representative of Emmanuel Macron’s En Marche movement in 2017. Follow him on Twitter @benjaminhaddad.