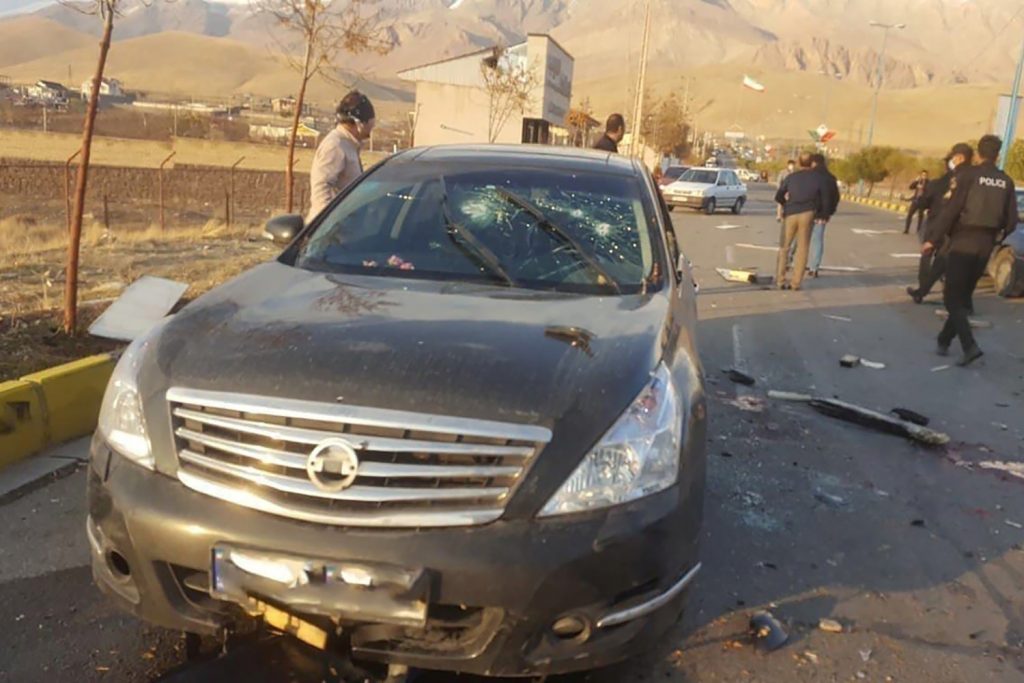 The assassination of an Iranian scientist has struck at the heart of Iran’s nuclear program and exposed the vulnerabilities of the Islamic Republic, which failed to protect one of its most valuable assets. Here’s a breakdown of what the development could mean for Iran and its standoff with the US and Israel over its nuclear program.

On November 27, unknown assailants targeted Iran’s top nuclear scientist, Mohsen Fakhrizadeh, east of the capital Tehran. While some initial reports indicate that Fakhrizadeh was killed by gunfire, others suggest explosives were also used. Many in Iran believe bombs attached to cars are the hallmark of Israel’s intelligence agency, Mossad, which is suspected to have previously killed Iranian nuclear scientists between 2010 and 2012. Three anonymous intelligence officials, including one American official, have told The New York Times that Israel was behind the attack on Fakhrizadeh, although Israeli officials have declined to comment.

Just weeks ago, US President Donald J. Trump reportedly asked his national security team about possible options to strike Iran over its nuclear program, following reports from international inspectors that Tehran was stockpiling nuclear material above what is allowed in the 2015 nuclear accord that it struck with the United States and other world powers. Iran accelerated its nuclear program a year after Trump’s unilateral withdrawal from the deal in May 2018, which curbed Iran’s nuclear activity in exchange for sanctions relief. The Trump administration’s “maximum pressure” policy on Iran has proved to be a failure, as it has neither changed the country’s behavior nor triggered the regime’s collapse.

While aides have reportedly dissuaded Trump from a military strike, it is possible that the Fakhrizadeh assassination was one of the options floated to the US president to respond to the latest nuclear buildup. With a looming presidential transition and President-elect Joe Biden’s support for the 2015 nuclear deal, the assassination could potentially be a last-ditch effort by the Trump administration to tempt Tehran to retaliate and scuttle any future diplomacy between the United States and Iran. It’s not clear what if any information the United States had about the operation in advance, and the White House and CIA have declined to comment on Fakhrizadeh’s killing, but President Trump has already retweeted several reports highlighting the assassination.

The implications for Iranian security

Fakhrizadeh was in many ways an obvious target. Israeli Prime Minister Benjamin Netanyahu mentioned him by name during a May 2018 press conference detailing secretly stolen documents on Iran’s nuclear program. Iran must have known that Fakhrizadeh was a potential target, demonstrating the ease with which Iran’s internal defenses can be breached and the extent to which intelligence agencies and adversaries can operate in the country. Many in Tehran may begin to wonder who will be next.

While the assassination is a setback for Iran’s nuclear program, the program doesn’t rely on just one scientist and will certainly continue after Fakhrizadeh’s death. Iran’s leaders may first look to build international sympathy after what they will argue is an unjust killing. Iranian Foreign Minister Mohammad Javad Zarif has already called for the international community to condemn the act as “state terror.” In the United States, former CIA director John Brennan called the act “criminal” and “highly reckless.” He added that while he doesn’t know “whether a foreign government authorized or carried out” the assassination, a state-sponsored operation “would be a flagrant violation of international law” and “encourage more governments to carry out lethal attacks against foreign officials.”

But Iranian retaliation could also be in the offing. Just two days ago, Iran released an imprisoned British-Australian academic in exchange for three Iranians who were part of a 2012 plot to assassinate Israeli diplomats in Thailand, an operation planned to avenge the suspected Israeli assassinations of Iranian nuclear scientists. With Tehran’s most famous nuclear scientist now gone, the United States, Israel, and their allies will now be on the lookout for a repeat performance.

Holly Dagres is editor of the Atlantic Council’s IranSource blog, and a nonresident fellow with the Middle East Programs. She also curates The Iranist newsletter. Follow her on Twitter: @hdagres.

The Iranian establishment has repeatedly claimed that a Democrat or Republican wouldn’t matter for Iran, but the general Iranian population begged to differ as it watched the vote-counting process with bated breath.

A new report presents a series of recommendations for the E-3 and the EU to preserve the JCPOA, promote regional peace and development and boost people-to-people contacts with Iran in concert with the new US administration. Taken together, these steps would amount to a renewed transatlantic diplomatic agenda through which the United States and European allies can stabilize the nuclear file and then build on the resulting diplomatic momentum to address other concerns with Iran.

Optimism and obstacles for US-Iran relations under a Biden presidency

The election of Joe Biden as the forty-sixth president of the United States has sparked optimism in many quarters that real diplomacy and engagement will be the preferred method of conducting US policy toward Iran after January 20.