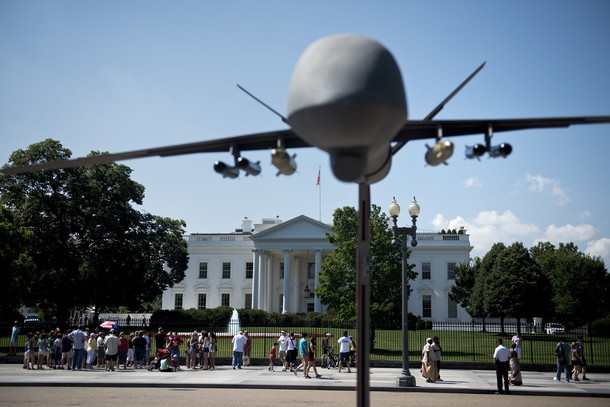 As documented in the recent Post series “The Permanent War,” the United States increasingly relies on drone strikes as a principal and permanent component in fighting global terrorism. This is effective at killing terrorist leadership and is relatively painless politically at home, as it does not require massive military engagements or put U.S. soldiers or pilots at risk. There appear to be no short-term consequences.

Yet as necessary as some drone strikes have been — and will be in the future — over-reliance on drones raises problems. In establishing a long-term approach, a good rule of thumb might be that we should authorize drone strikes only if we would be willing to send in a pilot or soldier to do the job if a drone were not available.

There are four principal issues with excessive reliance on drones.

The first is moral. More people have been killed in U.S. drone attacks than were ever incarcerated at Guantanamo Bay. Can we be certain there were no cases of mistaken identity or innocent deaths? Those detained at Guantanamo at least had a chance to establish their identities, to be reviewed by an oversight panel and, in most cases, to be released. Those who remain at Guantanamo have been vetted and will ultimately face some form of legal proceeding. Those killed in drone strikes, whoever they were, are gone. Period.

The second is consequences. U.S. reliance on drone strikes allows our opponents to cast our country as a distant, high-tech, amoral purveyor of death. It builds resentment, facilitates terrorist recruitment and alienates those we should seek to inspire. Drone strikes may decapitate terrorist organizations, but they do not solve our terrorist problem. In fact, drone use may prolong it. Even though there is no immediate retaliation, in the long run the contributions to radicalization through drone use may put more American lives at risk.

Third, our monopoly on drone warfare will not last. Others, from European allies to Russia, China and Iran, are acquiring and beginning to use drones for surveillance — eventually, they will use them for killing as well. What would we say if others used drones to take out their opponents — whether within their own territory or internationally? Imagine China killing Tibetan separatists that it deemed terrorists or Russia launching drone strikes on Chechens. What would we say? What rules would we urge them to abide by?

Then there is the question of national identity: What do we want to be as a nation? A country with a permanent kill list? A country where people go to the office, launch a few kill shots and get home in time for dinner? A country that instructs workers in high-tech operations centers to kill human beings on the far side of the planet because some government agency determined that those individuals are terrorists? There is a “Brave New World” grotesqueness to this posture that should concern all Americans.

This is not to say that the United States should never use drones for targeted attacks. We should. But we should also be creating standards and practices that are entirely defensible, even — and perhaps especially — if others were to adopt them.

There is no doubt that the United States is under threat from terrorists who would not hesitate to kill innocent Americans. The Sept. 11 attacks in Benghazi should not have surprised us. The American people need to understand that we are in an armed struggle and that we must be prepared to meet and defeat our enemy with whatever force is necessary.

Yet exactly how we conduct this warfare matters considerably. Ultimately, the objective is to bring humanity together on the side of humanity. Our current use of drones does not meet this standard.

Standards such as U.N. approval and adhering to “international law” ring hollow, as they do not deal with the reality we face. Russia is single-handedly blocking U.N. action on Syria. International law — where it exists — is followed by law-abiding countries but used as a shield by those who reject the whole premise.

A more useful standard comes from our country’s basic approach to warfare. For a conventional military engagement, we would take into account the costs and risks of: sending a force to carry out the strike; generating public support; seeking congressional authorization; attracting allies to the cause; the regional effects of military action; and the duration and end of the mission, not just the beginning.

We must be careful not to adopt rote formulas for restricting drone use. But we also must avoid writing blank checks. Applying the general considerations used in launching military operations should be the start of a new doctrine guiding drone warfare as well.

Kurt Volker is executive director of the Arizona State University’s McCain Institute for International Leadership, based in Washington, D.C., with a presence on ASU’s Tempe campus. He is also a senior fellow at the Center for Transatlantic Relations at the Johns Hopkins School of Advanced International Studies and a member of the Atlantic Council’s Strategic Advisors Group. He is a former US Ambassador to NATO. This piece was originally published in The Washington Post.