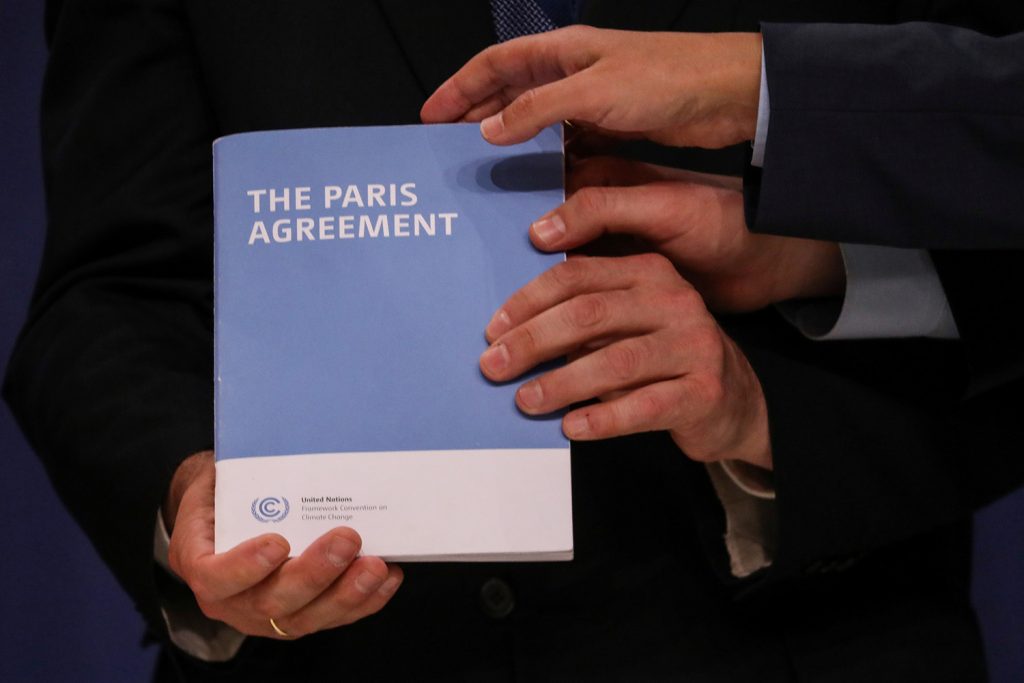 The United States finalized its formal withdrawal from the Paris Agreement on climate change on November 4, exactly one year after it began the process. Today, with the presidential election outcome still undetermined, the United States is the first country to step away from the historic climate accord.

US President Donald J. Trump first announced his intent to withdraw on June 1, 2017. Article 28 of the Paris Agreement stipulates that a country must wait three years after the agreement went into force on November 4, 2016, to withdraw, at which point the country may do so by submitting written notification to the Secretariat, and then wait one year until the withdrawal takes effect.

When former US President Barack Obama spoke about the success of the Paris Agreement in December 2015, he said, “Together, we’ve shown what’s possible when the world stands as one.” The Parties of the Paris Agreement—then 195 nations—agreed on a bottom-up approach to combat climate change and hold the global average temperature below two degrees Celsius, with best efforts to keep it below 1.5 degrees. The climate accord presents a framework for transparent reporting and monitoring of greenhouse gas (GHG) emissions, a pathway towards a climate-resilient development, as well as a mechanism to increase climate ambition on mitigation and adaptation every five years through the resubmission of Nationally Determined Contributions (NDC).

Climate change affects every country around the world and can only be solved through a coordinated, multilateral effort. The Paris Agreement has been the most effective platform to bring countries together around this issue. Despite its shortcomings, the countries involved are willing to come to the table year after year to make collective progress during the annual Conference of the Parties (COP).

The United Kingdom will host COP26 in Glasgow in 2021 after postponing a year due to the coronavirus pandemic. The UK is using this year to increase pressure on countries, businesses, cities, and regions to aim for net-zero carbon emissions by 2050 and to make the commitment before the next COP, as well as mobilizing an adaptation and resilience global action agenda jointly with Egypt. In addition to the frequency and severity of extreme weather and extreme heat events around the world that raised awareness of the risk of climate change, this kind of geopolitical pressure led to unprecedented momentum across the public and private sectors in a race to net-zero carbon emissions by mid-century.

The European Union launched the Green Deal with a promise to make Europe the first climate-neutral continent by 2050, and the recent carbon neutrality statements of China, Japan, and South Korea indicate that the world is moving ahead in the fight against climate change, with or without US leadership. Last week, two US allies—Japan and the Republic of Korea—announced carbon neutrality commitments by 2050, one week before the US presidential election, and two weeks after Chinese President Xi Jinping announced China’s 2060 carbon neutrality target. President Trump’s “America First” agenda and the US absence in climate and the global COVID-19 response have left the door wide open for China to step in as a leader in international climate governance.

The US withdrawal from the climate accord could be short-lived if former Vice President Joe Biden is elected. Biden stated he intends to rejoin the Paris Agreement and implement an ambitious climate agenda under his “Build Back Better” campaign, including a target of 100 percent clean electricity by 2035, a commitment to net-zero emissions by 2050, and the promotion of green infrastructure and climate resilience as components of a global economic recovery.

However, a Republican-led Senate could hinder his progress and present obstacles to reinstating the environmental and climate regulations that the Trump administration rolled back over the last four years. The work to regain confidence in the United States as a climate leader will start at home with more ambitious policy action, a commitment to clean energy innovation and deployment, and improved resilience measures.

Another four years of a Trump presidency would hinder international efforts to fight the causes and impacts posed by climate change and make the goal of peaking global carbon emissions by 2030, as recommended by the Intergovernmental Panel on Climate Change, nearly impossible. The United States is the second-highest greenhouse gas emitter after China and the highest emitter in per-capita emissions. The Climate Action Tracker labels US climate policies as “critically insufficient” and attributes most of the reductions in emissions over the next few years to the economic slowdown from the pandemic.

However, the momentum to decrease emissions will not wane at the US subnational level, whatever the outcome of the election. Coalitions like We Are Still In are leading the charge for climate ambition in statehouses, city halls, tribal governments, and campuses across the country. Together, they aim to reduce US GHG emissions by 37 percent from 2005 levels, though decisive federal government action could accomplish much more. The United Nations and other countries are committed to working with US stakeholders who share the determination to meet the objectives of the Paris Agreement, regardless of the position of US federal leadership.

The pandemic illustrated the critical role for strong national leadership in combating a crisis and what happens when countries—including the United States—fail to cooperate on a multilateral level to find a solution. The global influence of the United States will decline if the next president does not commit to a 2050 net-zero target, bolster worldwide adaptation and resilience efforts, and rejoin the Paris Agreement. Climate change is emerging as a central pillar of key multilateral forums such as the Group of Seven (G7) and the Group of Twenty (G20) and will be an integral part of foreign policy from trade to health to security. The pressure to act will not abate.

Either way, this election is a major turning point for our climate future

As the nation braces for the presidential election next week, there’s arguably no issue beyond the COVID-19 crisis for which the stakes are higher than climate change policy.